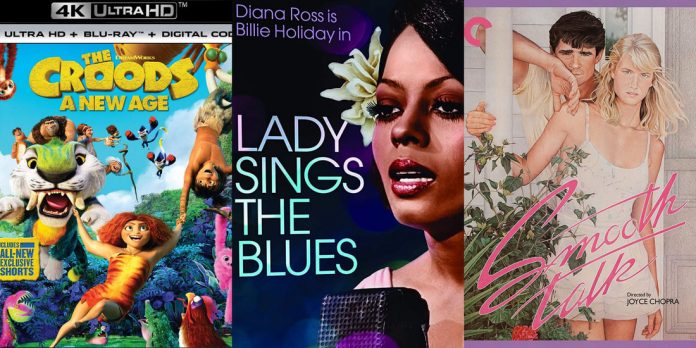 This week, several boutique labels are putting out films on Blu-ray from classic Hollywood to 21st-century independent film, plus a newer release comes to 4K.

​In addition to this 90s favorite, Warner Archive is also putting out a couple of classic movie musicals. For the first time on Blu-ray comes the 1951 version of the famous musical “Show Boat,” starring Kathryn Grayson, Ava Gardner, Howard Keel, and Joe E. Brown. This release contains a new 4K master taken from the original Technicolor camera negative. It also includes vintage cartoons and short films, a radio broadcast, and audio-only outtakes. Warner Archive is also releasing two Doris Day musicals: “My Dream Is Yours” from 1949 and “On Moonlight Bay” from 1951.

​The Criterion Collection actually has multiple releases this week. The first is the 1985 coming-of-age drama “Smooth Talk,” directed by Joyce Chopra and starring Laura Dern, Treat Williams, Mary Kay Place, and Levon Helm. This is a new 4K master, following a repertory run of the film last year by Janus Films. The Blu-ray includes various new and archival interviews with Chopra and the cast and three short films by Chopra and Joyce Carol Oates’s original 1966 short story.

​Also from Criterion this week are two films by Iranian-American filmmaker Ramin Bahrani. The first is “Man Push Cart” from 2005. The release features an audio commentary track, interviews, and a short film by Bahrani. The other film is “Chop Shop” from 2007. Like the other release, this also includes a commentary and interviews but also features rehearsal footage from the making of the film.

From Paramount this week, they are putting out a “John Hughes: 5-Movie Collection”, a collection of films directed by and/or written by the iconic 80s and 90s director. Featured in this set are “Planes, Trains and Automobiles,” “Ferris Bueller’s Day Off,” “Pretty in Pink,” and for the first time on Blu-ray, “She’s Having a Baby,” and “Some Kind of Wonderful.” This is a five-disc set with extras on all of the films.

Finally, the other Paramount release this week is “Lady Sings the Blues,” the 1972 biopic about Billie Holiday (fitting timing with “The United States vs. Billie Holiday” being released soon). The film is directed by Sidney J. Furie and stars Diana Ross, Billy Dee Williams, Richard Pryor, Paul Hampton, and Virginia Capers. This is the film’s Blu-ray debut, previously being difficult to find in high quality. It includes an audio commentary track, deleted scenes, and an over 20-minute featurette on the film with interviews. This will be a must-own for Oscar completists, as it features Diana Ross’s Academy Award-nominated performance.

This week, it appears there is going to be a Criterion Collection flash sale on their website, so I wanted to recommend one of their releases that I think embodies the best of Criterion’s releases in terms of presentation, packaging, and supplemental features. “A Hard Day’s Night” is the 1964 Richard Lester film depicting the height of Beatlemania, following the band playing themselves in a fictionalized story and containing several musical numbers. Not only is this film essential for fans of the Fab Four, it is also groundbreaking in how musical sequences were shot and edited and an early look at what would become music videos. It is also a delightful comedy, embodying the sense of humor found in the 60s and 70s British entertainment that so many still love today.

The restoration looks stunning, with some of the best and most crisp black-and-white cinematography I have ever seen, particularly from this era. The sound mix is also top-notch. As far as special features, this release is stacked. In addition to the commentary tracks that Criterion is known for, this release includes several interviews, documentaries, and featurettes about everything from the Beatles during this time to Lester to the film’s making of and legacy. This is also a dual-format release, containing one Blu-ray disc and two DVDs, housed in a thick digipak package with black-and-white artwork and a multi-page booklet. Even if you are just a casual fan of the Beatles or have never seen this film, I would still highly recommend this release. It is the best quality in which to see this film and contains so much in terms of supplements and packaging that it is worth every penny.​
​