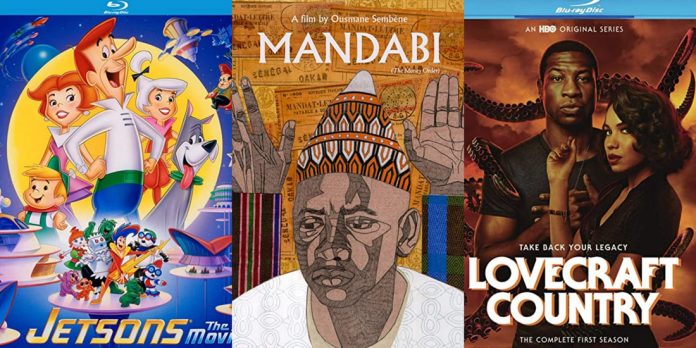 This week in physical media releases is a true grab bag with something for everyone. From television shows to filmmaking documentaries to a 90s-kids’ favorite.

Kino Lorber has a bunch of releases this week. First, we have “Jetsons: The Movie,” the 1990 feature-length film based on the iconic Hanna-Barbera series. The film features a lot of the original voice cast from the series. Included on the Blu-ray is an audio commentary by author and film historian Lee Gambin and an interview with voice actor Jeff Bergman.

Next, Kino is putting out a new Blu-ray of “Man with a Movie Camera,” the 1929 experimental Soviet silent documentary by director Dziga Vertov. The film is known for its innovative filmmaking techniques in its cinematography and editing and is commonly studied in film school.

Another movie-related film from Kino this week is “The Kid Stays in the Picture,” the 2002 documentary about the legendary film producer Robert Evans. The film is based on the book of the same name, and Evans himself narrates the documentary.

Warner Archive has a couple of releases this week. First, there is a Blu-ray release of the 1956 Elia Kazan film “Baby Doll.” Written by Tennessee Williams based on his play of the same name, the film stars Karl Malden, Carroll Baker, and Eli Wallach.

​Finally, from the Criterion Collection is “Mandabi” (The Money Order), a 1968 film from Senegal, the first in the Wolof language, directed by Ousmane Sembène. As per usual with Criterion, the release includes a number of supplemental features. It consists of an introduction by film scholar Aboubakar Sanogo, a conversation from 2020 with author and screenwriter Boubacar Boris Diop and sociologist and feminist activist Marie Angélique Savané, a documentary on Sembène, and the director’s 1970 short film.

This past weekend, as an alternative Valentine’s Day pick, several people on Twitter were watching David Lynch’s “Wild at Heart.” Many of them also mentioned its lack of a streaming presence, so I figured I would take this opportunity to recommend the Blu-ray release from Shout Factory under my beloved Shout Select label. The film is, of course, from 1990 and stars Nicolas Cage, Laura Dern, Diane Ladd, Willem Dafoe, Harry Dean Stanton, and Isabella Rossellini (along with a slew of other Lynch regulars and “Twin Peaks” cast members). It is a romantic crime film that also won the Palme d’Or at that year’s Cannes Film Festival. I watched it for the first time recently, and it has become one of my favorites of Lynch’s filmography. I also think it is a good entry point for Lynch if you are a fan of these actors because while it does include the director’s typical weirdness and darkness, it is also perhaps the director at his most fun and sexy in terms of his film output.

The actual Blu-ray features a gorgeous cover design of a painting of the main characters using an eye-catching warm color palette. It looks and sounds fantastic, again featuring a bright and warm look and showcasing its Elvis and “Wizard of Oz” references to beautiful and glowing effect. It includes a number of supplemental features on the making of the film and Lynch himself, as well as interviews and deleted and extended scenes. If you’re already a fan of David Lynch or even as a blind buy, I would highly recommend this disc and this film. It’s truly a wild time.