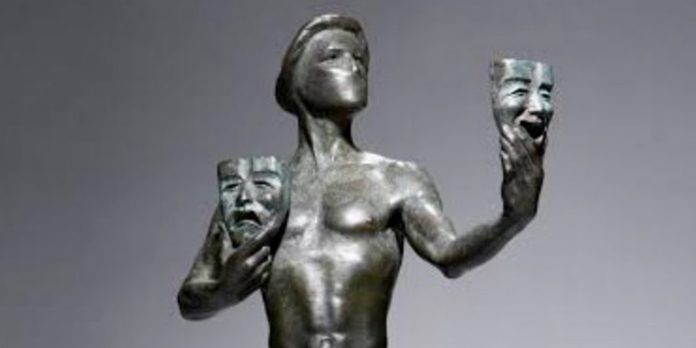 While receiving a Golden Globe or Critics Choice nomination is nice, a Screen Actor’s Guild Award nomination is critical if you’re going to receive an Oscar nomination or eventually win. The acting branch is the largest branch of the Academy and only “Braveheart” (1995) was completely overlooked by SAG and still able to win the Oscar Best Picture, up until the back to back years of “The Shape Of Water” in 2017 and “Green Book” in 2018. Last year’s Best Film Ensemble winner “Parasite” went on to win Best Picture and all four individual acting winners followed up their SAG victories with an Oscar win. So where does that leave us for this year?

​Click below to see my predictions for this year’s SAG Award Nominations.

Most likely to surprise: “Da 5 Bloods,” “Minari” or “Nomadland“

Thoughts: The Screen Actors Guild includes not only film and television performers but AFTRA, which gives news anchors, voice-over artists and meteorologists the chance to vote. But even before the merger, the SAG Awards always have at least one spot in the Ensemble category for a more populous lighter-fare film, for example, past nominees; “Hairspray” or “Crazy Rich Asians” which weren’t in the Oscar hunt for Best Picture. This year, I think that film will be Ryan Murphy’s “The Prom.”

Most likely to surprise: Kingsley Ben-Adir – “One Night in Miami,” John David Washington – “Malcolm and Marie” or Steven Yuen – “Minari“

Thoughts: Gary Oldman has an iffy past at best with the Golden Globes but his fellow actors should prove to be kinder. With the exception of Oldman, no one listed above has received an individual win before. Boseman did win as part of the Ensemble for “Black Panther” (2018). The SAG Awards may take this opportunity to award Hopkins for the first time and this could push him to frontrunner status.

Most likely to surprise: Amy Adams – “Hillbilly Elegy,” Sophia Loren – “The Life Ahead” or Zendaya – “Malcolm and Marie“

Thoughts: The fifth slot in this category is wide open and whoever can slip in may be able to translate a SAG Award nomination to an Oscar nod. Given how much they love Streep, this may help her hold off competition from Loren, who’s looking for her first individual nomination.

Thoughts: This will be the first major test for Bakalova and given the raunchy nature of “Borat Subsequent Moviefilm,” it could leave her on the sidelines. Should this take place, look for one of their recent favorites, Saoirse Ronan, to sneak in.

Thoughts: Again, the actors of “The Trial of the Chicago 7” loom large over this category. The acting branch may choose to nominate Boseman twice to show their love for the actor who passed away too soon.

Ugh, stupid COVID! If it wasn’t for this virus, the television side of the SAG Awards would be so easy to predict. It’s simple; just start with the performers and series that were nominated last year. Add in the performers and series that sat out the year before because of the cut off and you have your nominees. But with more than one or two spots available, this is trickier than usual. Keep in mind that since the SAG Awards honor Drama, Comedy and Limited Series, they combine lead and supporting performers into one battle to the death category.

Most likely to surprise: “Killing Eve,” “Lovecraft Country” or “The Mandalorian”

Thoughts: 2019 nominees “Better Call Saul” and “Ozark” should easily make the shortlist after missing the eligibility cut off. Whether two-time winner “This Is Us” (201-2019) can make a comeback after being snubbed last year remains a big question mark. The “This Is Us” snub last year proved critical, as the series would go on to be snubbed at the Emmys for Outstanding Drama Series.

Most likely to surprise: Tobias Menzies – “The Crown”, Pedro Pascal – “The Mandalorian” or Tom Pelphrey – “Ozark”

Thoughts: 2019 winner Bateman and nominee Odenkirk will re-join the category after sitting out last year. Joining them should be 2018 winner Brown. Two brits – Rhys and O’Connor, are hoping to receive their first respective individual nominations. This category proved to be an accurate bell-weather for the Emmys, as all four actors eligible reaped Emmy nominations. Will the same thing happen here?

Thoughts: 2019 nominees and co-stars Laura Linney and Julia Garner (“Ozark”) should once again contend. But whether the 2019 winner, Sandra Oh, will join her co-star that replaced her last year remains to be seen. Also, on the bubble is Carter, trying to hold off her co-star Corrin and her buzzed-about performance as Princess Diana. This one is more competitive than people think.

Most likely to surprise: “Curb Your Enthusiasm,” “The Great,” “Modern Family” or “Ramy”

Thoughts: “Schitt’s Creek” should easily win this category for its final season. The race to fill the final four spots is wide open. Considering the SAG Awards do like populous series and films, “What We Do in the Shadows” could sneak into the category. “The Good Place” is barely eligible but will try and receive a goodbye Ensemble nomination. But if the SAG Award voters aren’t up to date on their television watching, then look out for past five-time winner “Modern Family” to compete for the final time.

Thoughts: With the category completely wiped clean, it’s really anyone’s guess who will make the cut. Look for last year’s unofficial hosts, the father-son duo the Levy’s, to fight this out amongst one another. But if the vote should split, Sudekis could sneak off with the prize. However, with the category completely gutted, do not be surprised if former nominees Anderson or David make a comeback.

Thoughts: With three open spots, this is going to be ultra-competitive. Look for Emmy-winner Murphy to join her onscreen mom and frontrunner O’Hara. Cuoco is hoping to score her first individual nomination. But with the category wide open, look out for Tomlin to re-appear after being snubbed last year.

And now we come to the only two categories without repeat nominees. But the Movie/Mini categories have their own unique challenges. Yes, these categories also combine both lead and supporting. But the 2020 Emmy winners/nominees will overlap with potential 2021 winners/nominees, making these the two juiciest races. When they say “it’s an honor to be nominated,” they mean it the most when it comes to these races.

Thoughts: Jackman could face difficulty making the cut as he competes for a TV Movie. 2020 Emmy winner Ruffalo will try and hold off a strong list of potential 2021 Emmy nominees. A win could push someone to frontrunner status before the spring Limited Series debut.

Most likely to surprise: Michaela Coel – “I May Destroy You,” Daisy Edgar-Jones – “Normal People” or Octavia Spencer – “Self Made”

Thoughts: Aduba and her socially relevant role as Shirley Chisholm should help a supporting performance make the list. A win for Taylor-Joy would firmly cement her status as Emmy frontrunner – throwing down the gauntlet to the upcoming Limited Series and TV Movie race. Catch her if you can!