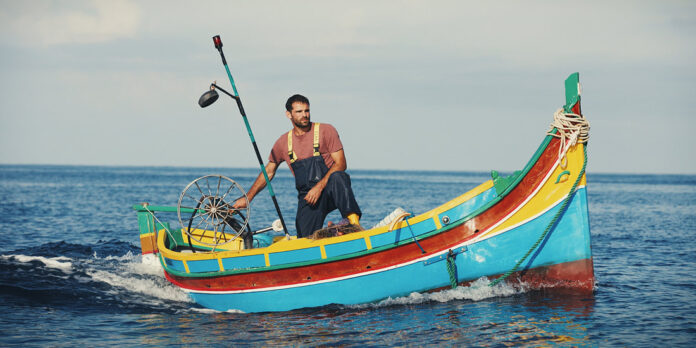 THE STORY – Jesmark, a Maltese fisherman, contends with a newfound leak in his wooden luzzu boat. Barely getting by, he sees his livelihood—and a family tradition from generations before him—imperiled by diminishing harvests, a ruthless fishing industry, and a stagnating ecosystem. Desperate to provide for his wife and their newborn son, whose growth impediment requires treatment, Jesmark gradually slips into an illicit black-market fishing operation.
​
THE CAST – Jesmark Scicluna, Michela Farrugia & David Scicluna

​There’s something to be said about elemental, oft-told types of stories. There’s a reason that certain storytelling tropes and beats have been repeated over and over again with little changed but the names and places. Such is the case with “Luzzu,” the feature debut of writer-director Alex Camilleri. It’s a mold-affirming tale of someone turning to illegal means of income after circumstances force them to the brink. While the ground the movie covers may be well-trodden, it is still an engaging film that goes to show why these types of stories never lose their potency.

Our protagonist is Jesmark (Jesmark Scicluna), a Maltese fisherman who takes to the sea in his small boat, or luzzu. He comes from a long line of fishermen, but he’s hit hard times. His infant son requires medical specialists, the sea yields less and less fish, and seemingly-arbitrary laws constrict his ability to be as productive at his job as he would like. As is so often the case when fictional characters are backed into a corner like this, Jesmark turns to black market fishing rather than going against his moral code by working on a bigger, industrialized fishing boat.

What sets this story apart is the well-drawn characteristics of Jesmark. This full portrait of a person makes it more understandable why he makes the dangerous choices he does, which is often the case with films of this ilk. Brought to life by a believably constrained performance from Scicluna, Jesmark is a follower of a traditional fisherman’s code. He bristles against the practice of being forced to dispose of fish that are caught out of season, remarking that his people have been fishing for thousands of years. He rejects the possibility of working on a commercial fishing trawler because of the environmental damage that they cause. He undoubtedly loves and respects the sea and honors the traditions that were passed down from his family of fishermen.

However, that’s not to say that the film doesn’t occasionally work in clichés. The movie stumbles into predictable moments, such as when Jesmark turns down help from his bothersome mother-in-law. It’s understandable why the screenplay finds these moments necessary to build the world around Jesmark, but that doesn’t mean that they’re any less expected.

In bringing this story to the screen, Camilleri exhibits well-worn but sturdy filmmaking. His handheld camera appropriately makes Jesmark’s world feel hurried and unsteady, effectively putting us in his uncertain world. It also evokes a feeling of drifting, not unlike one of the many little boats we see throughout the film. The grounded, unglamorous feeling that the entire film revels in makes the bright and colorful paint of Jesmark’s luzzu stand out, showing it to be a vibrant reminder of his past and his potential.

“Luzzu” is another classic story of how an uncaring, profit-driven world can grind a person down until it is no longer clear if they’re the same person. It may not reshape the storytelling formula that is typical of this type of movie, but it’s steady and moving in its own way.