My 2021 Oscar Predictions: The Above-The-Line Races 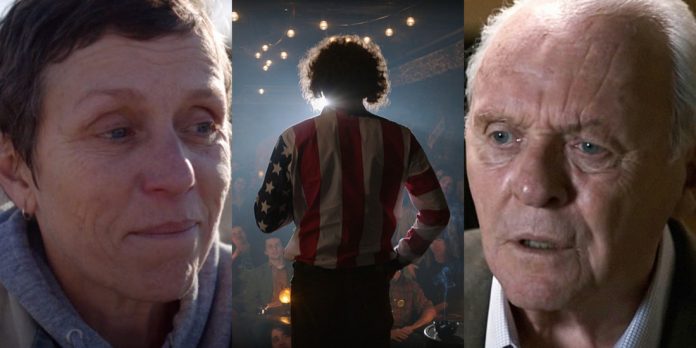 Yesterday, I revealed my predictions in the below-the-line Oscar categories. Now, I am revealing my predictions for the top eight prizes. After the Critics, Golden Globes, SAG, BAFTA and Industry Awards all chimed in on the race; most categories seem less murky. But in others, the tea leaves still haven’t formed a clear picture for what is going to happen this Sunday.

Again, I’ll be using the above races to formulate my predictions. I will also once again be looking at how Best Picture nominees since the category expanded in 2009 have performed in each category.

In the screenplay categories, since the Best Picture category expanded, no film has won either category without receiving a corresponding Best Picture nomination since. Last year’s Best Adapted Screenplay winner Taika Waititi (“Jojo Rabbit“) and Best Original Screenplay winners Bong Joon-ho and Jin-won Han (“Parasite“) made history together as the first time the winners did not include a Caucasian male. This year Chloe Zhao (“Nomadland“) in Best Adapted Screenplay and Emerald Fennell (“Promising Young Woman“) in Best Original Screenplay will try to make history as the first time two women have swept the writing categories. Best Adapted Screenplay hasn’t had a women winner in 15 years since Diana Ossana (shared with Larry McMurtry) won for “Brokeback Mountain” (2005). Not to be outdone, Best Original Screenplay hasn’t had a women winner in 13 years since Diablo Cody won for “Juno” (2007). The good news for both Fennell and Zhao is that in the 11 years of the expanded Best Picture race, the screenplay winners have all had Best Picture nominations.

Winner: “The Father” – Written for the screen by Christopher Hampton and Florian Zeller
Most Likely To Surprise: “Nomadland” – Written for the screen by Chloé Zhao
Thoughts: The Writers Guild Awards have very specific eligibility rules and thus eliminated both frontrunners from the race— “Nomadland” and “The Father.” Both films lost the Golden Globe to “The Trial of the Chicago 7,” which is competing for Best Original Screenplay. “Nomadland” picked up the Critics Choice Award & USC Scripter but lost the BAFTA to “The Father.” This could have been a case of British flag-waving, or it is possible that voters knew they were awarding Zhao with Best Director and decided to spread the wealth. This mindset could affect the Oscar race as well, as Zhao is up for four awards. She is heavily favored to win Best Director leaving this race open for an upset. It is also possible that voters will see “The Father,” a film about a man grappling to deal with Alzheimer’s and continuing time shifts more of a writer’s achievement than “Nomadland.” For “The Father’s” writers, should they win, Christopher Hampton will be victorious for only the second time in 32 years after previously winning for “Dangerous Liaisons” (1988), and this would be the first Oscar for writer-director Florian Zeller, who made his directorial-debut with this film.

Winner: Daniel Kaluuya – “Judas and the Black Messiah“
Most Likely To Surprise: Sacha Baron Cohen – “The Trial of the Chicago 7“
Thoughts: Again, there really shouldn’t be a surprise after Kaluuya swept the season, winning the Golden Globe, Critics Choice, SAG, and BAFTA Award. Also helping him is his film’s Best Picture nomination as ten of the last eleven winners came from a Best Picture nominee. Kaluuya, like many potential winners, has history on the mind as he should make a historic climb on stage as the first Black British Actor to win an Oscar. Even though Kaluuya has swept, it is not a reflection on the overwhelming talent in this category, and here’s hoping they’ll each get another chance at Oscar glory some day.

Winner: Youn Yuh-jung – “Minari“
Most Likely To Surprise: Glen Close – “Hillbilly Elegy“
Thoughts: After all the hype of Close vs. Colman Round II, it was all for nought. Youn Yuh-jung, South Korea’s Meryl Streep, and her heartwarming, scene-stealing performance both on and off-screen made this race a lot easier to predict after she picked up both SAG and BAFTA Awards. Hurting both Close and Bakalova—Supporting Actress has gone to a Best Picture nominee eight times out of the past 11 years. Yes, many would predict Bakalova as the spoiler. But the Academy may feel they owe Close, and if that’s the case, she may shock us all again. Should Yuh-jung win, she will be only the second Asian actress to win 63 years after Miyoshi Umeki made history as the first to do so, winning Best Supporting Actress for “Sayonara” (1957).

Winner: Chadwick Boseman – “Ma Rainey’s Black Bottom“
Most Likely To Surprise: Anthony Hopkins – “The Father“
Thoughts: Boseman should make history as the first American Actor to win posthumously and the first to do so without previously being nominated. Solidifying his place as the favorite are his Golden Globes, Critics Choice, and SAG Award wins. But only Jeff Bridges for “Crazy Heart” (2009) prevailed without his film in the Best Picture lineup. Like Boseman, Bridges’ film received multiple nominations. However, this does leave the door open just a little for BAFTA winner Hopkins to upset.

Winner: Frances McDormand – “Nomadland“
Most Likely To Surprise: Viola Davis – “Ma Rainey’s Black Bottom“
Thoughts: It is important to keep in mind that on four occasions, the Best Actress winner did not come from a film in the top race for Best Picture: Meryl Streep for “The Iron Lady” (2011); Cate Blanchett for “Blue Jasmine” (2013)and Julianne Moore for “Still Alice” (2014) and Renee Zellweger for “Judy” (2019).

Let’s work backward in this topsy-turvy race. Kirby may have received nominations at the Critics Choice, Golden Globes, SAG, and BAFTA Awards, but she hasn’t picked up a trophy along the way. Unfortunately for this first-time nominee, she’s not going to win the big one. Golden Globe winner Day, unfortunately, does not fit the list of winners that come from a non-Best Picture nomination. Add in the fact that she is her film’s lone nomination, her disappearance from the race at both SAG and BAFTA Awards; this could be too big of a hurdle to overcome. Mulligan, the once presumed frontrunner, has only picked up the Critics Choice Award (and an Indie Spirit Award as of last night), leaving her chances at Oscar on the slim side.

This leaves us with Davis and McDormand. Davis’s co-star Boseman is the expected Best Actor winner, but no film has swept the top acting prizes without at least receiving a Best Picture nomination, if not winning. Davis, however, does fit the archetype of the actresses above who win this category without their film being nominated. Helping and hurting Davis’s case is her recent SAG Award. But she is one of the actors’ favorites and has five individual wins to prove it. Things looked good for her until McDormand scored a major win picking up the BAFTA. Davis is my preference, and this is a situation where I hope my prediction doesn’t work out. Typically in the acting categories, when the top four awards go to different performers, or there’s an upset at the BAFTA’s, it is smart to choose that person. McDormand is the face of her film, which is the favorite to win Best Picture, and she could go along for the ride. However, the SAG Awards were praised for making history, with all four of their winners being people of color. The Oscars may want to follow their example— especially if they want to correct their recent past #OscarsSoWhite mistakes.

Winner: Chloe Zhao – “Nomadland“
Most Likely To Surprise: David Fincher – “Mank“
Thoughts: I have to include a “likely to surprise” after Bong Joon-ho’s upset last year; however, I do not see that happening. The difference between Sam Mendes (“1917“) and Joon-ho (“Parasite“) was that was a much closer race with a clear number two. This race has been Zhao all season— without a strong runner-up, she should easily make Oscar history as the category’s second woman winner, first Asian woman winner, and third Asian director to win.

Winner: “The Trial of the Chicago 7“
Most Likely To Surprise: “Nomadland“
Thoughts: I am fully aware that the smart pick is “Nomadland” after it swept almost every prize it has been eligible for. But something doesn’t feel right about this, especially if