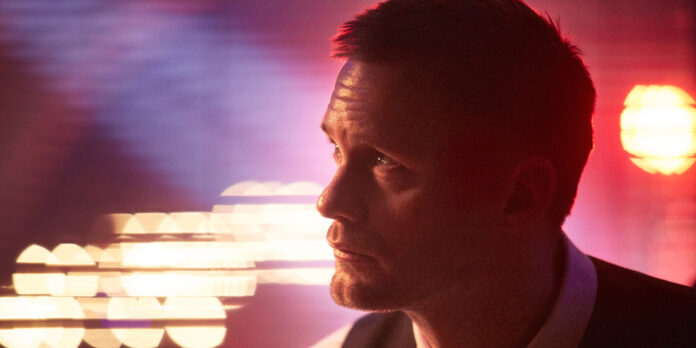 THE STORY – In a Berlin of the future, a mute bartender’s search for his missing lady-love takes him deeper and deeper into the city’s criminal underbelly.

​Netflix’s latest original film “Mute” from Duncan Jones, the director of the acclaimed science fiction film “Moon,”  is not only another misfire for Netflix originals but also just a downright sour project. For what is meant to be Jones’ passion project, the film appears as nothing more than one giant homage. Drifting comfortably among the countless tropes and cliches of the genre, “Mute” tries its absolute best to be something original but just ends up falling short.

The first moments of the film open on a young boy named Leo (Alexander Skarsgård) who suffers a rather brutal injury. His throat is torn open by a propeller on a boat and he is immediately rushed to a hospital to be operated on. While the doctors manage to save his life his vocal chords are ripped and he loses the ability to speak. The doctors had the ability to save Leo’s voice but his parents wouldn’t allow it due to them being Amish, as it would go against their religion. Several years pass and we now are presented with Leo as an adult, who is played by Alexander Skarsgård. Leo works as a bartender at a local nightclub in Berlin’s futuristic, steam-punk like scene. Leo works at this nightclub with his girlfriend Naadirah (Seyneb Saleh). After an altercation with a customer at the nightclub harassing Naadirah, she disappears. Leo is then determined to find Naadirah even if that means going up against Berlin’s toughest gangsters.

First and foremost the story for “Mute” is a tad non-existent. The film just kind of glides among its exposition filled screenplay. Instead of allowing us to unravel the mystery for ourselves or even to attempt to draw up our own questions, the film comes out swinging. Not in a good way either but more like in a way that’s overwhelming. We rarely get time to even analyze what is happening in a scene before the script is throwing dozens of questions our way. The questions rarely involve what the core of the film is supposed to be about which is Leo attempting to find his girlfriend. “Mute” tries to be one of those elusive character dramas where we as an audience get to plunge our psyche into ever looming fascinations about the characters within the world. But instead of giving his characters depth, Jones’ characters are more one-note than anything else, proving to be more like walking cliches than actual characters.

As if the lack of story isn’t issue frustrating enough already, the dialogue is an entirely separate issue. It feels like every other line of the spoken word is some form of a question. Now whether or not the questions pertain to something of actual importance is an entirely separate topic. The film tries its best to be poetic in its exchanges and even tries and sprinkles in a little bit of social observation on the world we’re living in today. Instead, the film proves to be a bit more desensitized and insensitive in several moments. The film is just a complete disappointment in nearly every realm.

Even in the spectacle area, the film is actually pleasing to look at but it feels like every set designed and every shot used is some sort of homage. The lighting style and set design with the main Berlin underground that we witness looks practically like a copy and paste from “Blade Runner.” Despite the film being a carbon copy of just about every other science fiction film, it still is pleasing to look at, making it the only redeemable aspect of the film.

“Mute” is another disappointment from the Netflix originals department and while it may not land in the realm of something completely unbearable like “Bright”, it still is an immense letdown. Duncan Jones tries his best to reach that level of auteur status he seems to have been chasing ever since “Moon” but with “Warcraft” and now “Mute,” he sets himself a few paces backward.