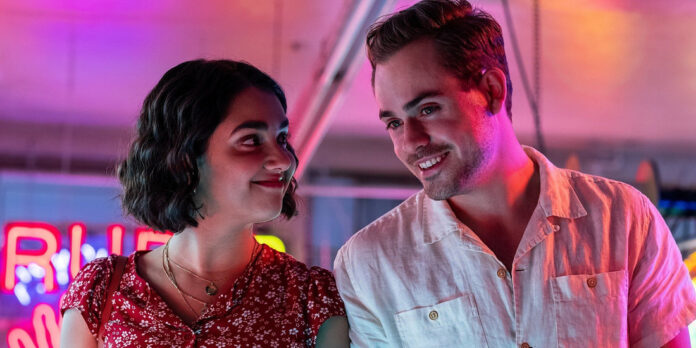 THE STORY – Dumped by her boyfriend, a New York art gallery assistant creates an exhibit for souvenirs from past relationships.

​Lucy (Geraldine Viswanathan) is a hoarder. But since the things she hoards are mementos of her past relationships, she’s convinced herself that it’s a cute personal quirk as opposed to something unhealthy. And when another boyfriend breaks up with her, and she loses her job at an art gallery, prodded by her roommates, she finally undertakes the mission of getting rid of her hoard of mementos. In the process, she runs into Nick (Dacre Montgomery) who’s in the process of building a boutique hotel. Seeing the large, empty space, and inspired by Nick hanging one of her ex’s ties on a nail in the wall, Lucy volunteers to help out if he lets her use the space to curate a gallery of things other people have saved from their own exes.

Thus begins your latest romantic comedy obsession, “The Broken Hearts Gallery.” Even just from reading that, or looking at the film’s poster, you know every beat of what will happen in Natalie Krinsky’s film. There are no surprises and no twists to the formula – the film even comments on it. The rom-com formula is nearly as old as the movies themselves, and every year, there are new additions to the genre. But few break out to become massively popular pieces of culture anymore, in part because there’s nothing more they can do to make themselves stand out. “The Broken Hearts Gallery” is just another rom-com that will warm your heart and make you smile and giggle a bit, but will fade from memory a few days later.

However, it has an ace up its sleeve in the form of its star. Viswanathan is a natural rom-com heroine, able to win our sympathy even while engaging in some very questionable behavior. She’s just dynamite, lighting up the screen whenever she appears. That light brightens most of her scene partners as well – Molly Gordon and Phillipa Soo are little firecrackers as Lucy’s roommates/best friends, and she even brings out the best in Utkarsh Ambudkar as the ex who kicks this whole thing off. Unfortunately, though, she’s not quite able to bring enough charm out of her male co-star. Montgomery has a naturally sleazy air about him that even Viswanathan’s powerful charisma can’t fully cut through. You want to like Nick because Lucy does, and she’s so lovely that there surely must be something there. All it ends up being is hotness. While her character arc is always going somewhere in every scene, his mostly stalls out until the last act. Because the film doesn’t care about his character very much, and since Montgomery’s performance doesn’t help matters, it’s hard to shake the feeling that Nick is just not good enough for Lucy. Nope, not even during the required big romantic gesture, which relies on Viswanathan and some well-used music cues to make sure the audience goes out on a high.

But even still, it’s hard not to like “The Broken Hearts Gallery.” Viswanathan is adorable, expertly getting under the skin of a young woman unable to be her best self because she can only think about what was and what could have been. In this way, Nick is a perfect foil for her as he can only focus on the here and now. They would make a great couple if it didn’t constantly feel like she could do so much better than him. That said, romantic comedies are a form of wish-fulfillment, so the idea of meeting a bad boy – who’s already on the way to reforming himself through a meaningful project – and all you have to do is get him over the last little hump to goodness, is pretty nice. And watching the sparkling Viswanathan take Lucy on her journey of self-actualization is enough to make you think that maybe she’ll get the best out of him after the credits roll. Romantic comedies live or die by the charisma of their leads, and Viswanathan is such a winner that “The Broken Hearts Gallery” is able to overcome whatever other problems it has.