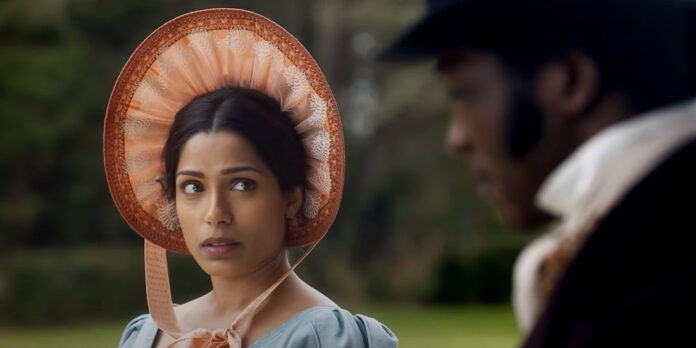 ​Fans of Jane Austen’s novels and the hit Netflix series “Bridgerton” can rejoice because the new film, “Mr. Malcolm’s List,” perfectly adheres to their tastes by combining both into an appealing package. Author Suzanne Allain adapted the screenplay based on her book of the same name, and it’s fantastic to see a new Regency romance film based on fresh material for a change. Suppose you like seeing characters overcome obstacles in relationships and love stories of female friendship set during this era. In that case, Emma Holly Jones’s directorial debut is sure to delight and entertain in equal measure.

The film opens in England in 1802 at Mrs. Finch’s Ladies Academy. A young Julia promises Selina that one day she will find her a husband after she is married and settled. The film then jumps sixteen years later to find Julia (Zawe Ashton), who has already been out in society for four seasons and is considered by many to be past her prime. She’s being courted by Mr. Malcolm (Ṣọpẹ́ Dìrísù), a wealthy but exacting bachelor who is disappointed by her lack of knowledge of the Corn Laws. When an embarrassing caricature of Mr. Malcolm and Julia circulates, highlighting that he has dropped his courtship of her, she plots to get her revenge. She ropes in her cousin Lord Cassidy (Oliver Jackson-Cohen), a friend of Malcolm’s, to help hatch the plot.

Malcolm is considered the catch of the season and is actively searching for a wife, but he has a list of requirements that he wants a woman to meet. Meanwhile, Selina (Freida Pinto) lives in an idyllic countryside home in Sussex. The daughter of a clergyman, she was formerly working as a companion to a wealthy woman in Bath. She still corresponds with Julia, who invites her to visit her in town following Selina’s refusal of an embarrassing proposal. But Julia has an ulterior motive: she plans to mold Selina to Mr. Malcolm’s requirements and make him fall in love with her, only for her to reveal that she has a list of requirements of her own. Julia persuades Selina and Cassidy to participate in the plan, though both are reluctant. However, it goes off the rails immediately, as Selina and Malcolm have a chance to meet at a ball and are intrigued by each other. Just as Selina and Malcolm are getting to know each other, she runs into Captain Ossory (Theo James), the nephew of the woman for which Selina previously worked. He’s interested in Selina, but Julia is immediately smitten by him. The story takes all the twists and turns you might expect from a Regency romance, with misunderstandings and passionate arguments galore.

All the actors give solid performances, with Ashton and Pinto playing off each other well, as they ideally create foils for each other. However, the standout performance is Ashley Park as Selina’s annoyingly giggly cousin Gertie Covington, whose ridiculousness only highlights Selina’s grounded nature. If the film has one flaw, it never quite redeems Malcolm from how unlikable he is at the film’s beginning. He’s very Mr. Darcy-like and dashing but also seems callous in his treatment of Julia, despite her flaws.

“Mr. Malcolm’s List” is beautifully designed from the ground up, with gorgeous costumes that adhere to the proper Regency silhouettes and sumptuous sets that allow the viewer to escape into a world of wealth and grandeur. From the stately homes to the tea tables, every scene is lovelier than the last. At the same time, Amelia Warner’s score also helps create the picturesque version of London that the characters inhabit.

The film has many of the same trappings found within a Jane Austen adaptation or any other period romance you can think of. However, this film has much more diversity in its casting than other types of stories such as this have typically offered, making it all the more unique in today’s cinematic landscape. The diverse casting allows these fantastically gifted actors to take on these roles in a movie where the viewer’s disbelief is already suspended, and the results are satisfying.

“Mr. Malcolm’s List” is an impressive directorial debut for Jones, who has the flair and control of a more seasoned director. It helps that she’s working with a pitch-perfect screenplay by Suzanne Allain. But the film also has everything someone could look for in a light-hearted period drama, from a longing dance scene to a hero galloping across a field to a pall mall game. Wonderfully conceived and crafted from every level of production, this is one of the most joyful period romantic comedies in years.

Powered by JustWatch
Share
Facebook
Twitter
Copy URL
Previous articleThe Next Best Picture Podcast: Episode 299 – The Best Films Of 2022 So Far, “Blonde,” “My Policeman” & “Persuasion” Trailers
Next article“MARCEL THE SHELL WITH SHOES ON”