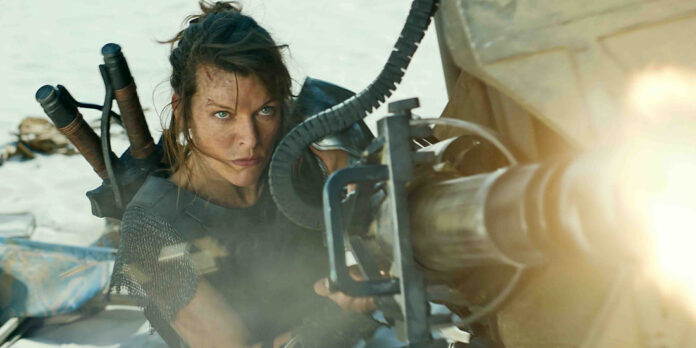 THE STORY – Behind our world, there is another — a world of dangerous and powerful monsters that rule their domain with deadly ferocity. When Lt. Artemis and her loyal soldiers are transported from our world to the new one, the unflappable lieutenant receives the shock of her life. In a desperate battle for survival against enormous enemies with incredible powers and unstoppable, terrifying attacks, Artemis teams up with a mysterious hunter who has found a way to fight back.
​
THE CAST – Milla Jovovich, Tony Jaa, Clifford “T.I.” Harris, Meagan Good, Diego Boneta & Ron Perlman

Paul W.S. Anderson knows his brand. He is the king of action camp, the name you seek when you have a video game adaptation and a relatively small budget. He knows how to make films that embrace their acting or storytelling shortcomings, and he’s even capable of making a cult classic like “Event Horizon” once in a while. Of course, the downside is that Anderson’s limited scope can feel cliched or trite if it’s not properly applied.

“Monster Hunter” veers dangerously close to this downside. It’s a straightforward action flick packed with fistfights and monster carnage, but the narrative is so thin that it feels underbaked at times. If you are going into the film expecting more than a recreation of the source material’s goriest battles, then you will be disappointed. If you came for the gore and only the gore, then you’re in luck.

“Monster Hunter” is a straightforward adaptation of the eponymous video game. A military squad falls through a portal in the desert and winds up in an alternate world populated by hideous monsters. The soldiers are gradually killed off by the monsters, which means Captain Artemis (Milla Jovovich) has to collaborate with a mysterious hunter (Tony Jaa) if she wants to live another day.

Most of these plot details are doled out in the first 20 minutes, leaving the rest of the film’s runtime to focus on Artemis and the Hunter. The decision to remove Artemis’s crew makes sense to those who played the game, but it makes the opening scenes feel like wasted screen time from a story standpoint. Each soldier is given exposition to help them stand out, which immediately comes back into play when they’re attacked. The fact that they’re played by familiar faces like Meagan Good, Diego Boneta, and T.I. doesn’t help to disguise their predictable exit.

That being said, the film does get better when it focuses on Artemis. The tense, largely silent moments where she is trying to formulate an escape plan is compelling and goes a long way in fleshing out her character. Seeing her shake with terror after a near-death experience tells us more about her mindset than all the clunky exposition in the world.

Milla Jovovich has staked her movie career on being a hardened badass, and Anderson (her husband) has played a big role in shaping that persona through his “Resident Evil” series. Here, she’s given a bit more nuance to play with, and it suits her. She taps into the video game character’s heroism while still making her feel like a real person who is struggling to survive.

The best stretch in “Monster Hunter” is when Artemis and the Hunter first meet and are provoked into a series of entertaining (albeit cartoonish) fights. The stuntwork is solid, and Jaa is such a physically adept performer that he brings personality to moves that would otherwise seem standard. The duo eventually calls a truce and join forces in an attempt to escape the monster dimension.

The film stumbles when Artemis and the Hunter go on the offensive against the monsters. The scenes themselves are fine, and the duo’s language barrier makes for some charming comedy (Jaa seems to be having a particularly good time), but this part of the film goes on for so long that it starts to feel stale. We can take so much killing and explosions before we start to become desensitized, and “Monster Hunters” doesn’t have enough going for it to overcome this one-dimensionality. (Ron Perlman makes random appearances in bizarre makeup, but he isn’t given enough screen time for his grizzled charm to leave an impression.)

Anderson does a fine job staging action, and he gets likable performances from his two leads, but one gets the sense that the script could have used a few more drafts. A movie like this doesn’t need exposition or additional subplots, but it desperately needs variety when it comes to the action and the set pieces. It may have ramped up tension to delay the monsters’ reveal, but instead, we’re shown the “Starship Troopers”-like design in the first act. Little miscalculations like this add up.

“Monster Hunter” is a competent action film with some creative death scenes and the trademark Paul W.S. Anderson sheen. There are entertaining stretches here, but they compete with repetitive and often predictable ones. If you’re willing to overlook these inconsistencies, then you might have a fun, forgettable time.