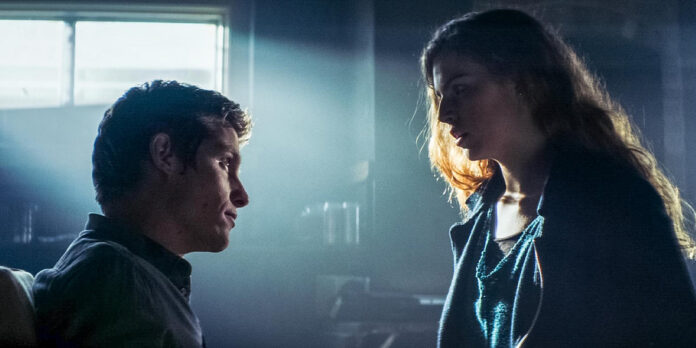 THE STORY – When a couple accidentally hit a man with their car, they put him in the backseat and go home to avoid the consequences.

​​The speechwriter for General Petraeus and The Secretary of Defense, and his brother, a long-time “The Walking Dead” director walk into a bar. It sounds like the punchline for a joke, but it instead it is the background for one of the year’s most surprising thrillers. Alston Ramsay, after years as a DC speechwriter, decided to collaborate with his brother Julius Ramsay (A veteran of directing television) to apply their experience and willpower to create a low-budget thriller. And it’s pretty good albeit flawed. All in all, Julius, Alston, and their brother Burke Ramsay put their minds together to write, direct, produce, edit, and location scout a low-budget modern-day fairy tale that manages to evoke shades of “Hostel” and “The Walking Dead” with influences of David Lynch and The Coen Brothers thrown in for good measure.

It’s New Years Eve. Lindsey (Alex Essoe) and Jeff (Dylan McTee) are in the midst of a marriage on the rocks. A few too many drinks into some strained holiday celebrations and the two manage to plow into a hitchhiker while driving home. Convinced that they’ll certainly do time, the two do what any rational human being would do: hide the body and grab the bleach. A few lies to the police deep into their cover-up, they discover that their ‘innocent’ victim was armed and carrying a piece of paper with their home address scrawled on it. Before long, the already strained couple (And Lindsey’s sister) are drawn headfirst into a noir-ish web of deceit, murder, and dirty money that will test the foundations of their marriage, their morality, and their sanity.

Ramsay’s project clearly shows signs of its low budget. The film is confined to just a few locations, the actors are unknown, and it’s small in scale. But the extent to which these three bothers apply their wits to making their money run is admirable. Alston not only wrote but also line produced, while Julius not only directed but also location scouted. Together, along with their effects supervisor, they created some gory effects work, sure to please Julius’s “The Walking Dead” fans. Note to the squeamish – there is a sequence involving fingernails that unflinchingly shows enough to scar you for life. Meanwhile, composer Chris Westlake (Who worked under John Williams on “Star Wars: The Force Awakens“) provides some eerie organ tunes, and cinematographer, Alexander Alexandrov (“The Wall“) lends the digital footage a grainy, film-like quality as he swathes the proceedings in moody darkness. There are only a few sets on display, but each one is striking, with a Victorian era bed and breakfast proving a standout. And most importantly, beyond the film’s technical prowess, the plot packs just enough twists to manage some genuine surprises along the way.

This is not to say the film is flawless. The performances vary in quality, although Ward Horton is a standout as Smith, evoking any number of David Lynch villains with his placid demeanor and unbroken stare. The film’s dialogue though often strong, no doubt influenced by Alston’s years of speechwriting, is occasionally flat, and the plot doesn’t tread much new ground. There is a lengthy torture sequence, that feels unnecessary in its brutality even if it lends some thematic depth to the protagonists. All in all, “Midnighters” is an impressive low-budget feature debut from the Ramsay brothers. It doesn’t reinvent the wheel but proves that the team can create a solid midnight movie that will please genre fans.