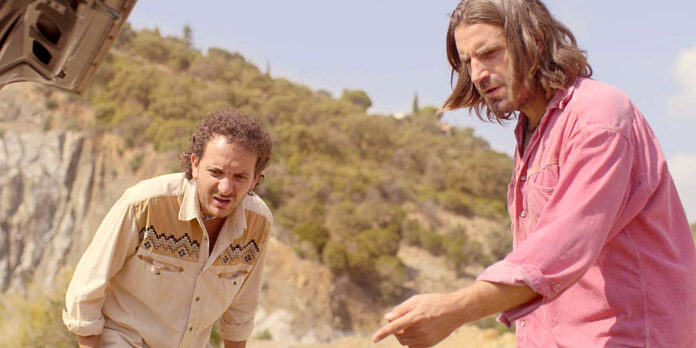 THE STORY – Two hapless losers discover a giant fly in the trunk of a stolen car and decide to domesticate it in a bizarre get-rich-quick scheme.

​​​There are some filmmakers whose works can be incredibly intriguing without being wholly accomplished. They have a particular vision that warrants discovery with every new venture, but the results can vary in success from project to project. Quentin Dupieux is undoubtedly a storyteller with a very particular sensibility that has made his oddity quite attractive. However, that anticipation comes with bated breath to see if the product itself is more than just a collection of offbeat gags and can actually be something one can relate to on some emotional level. When it comes to “Mandibles,” this is, unfortunately, another example that prioritizes a quirky presentation over more meaningful thematic explorations.

The film follows the adventures of two hapless friends with a strong bond. Manu (Grégoire Ludig), currently homeless and without much moveable skills, is given an assignment from an acquaintance to pick up an item for delivery and make some quick cash. After stealing a car, he recruits Jean-Gab (David Marsais), himself also possessing few ambitious prospects in life, to help him. Shortly after they get going, a significant discovery is made: a giant fly in the trunk of the stolen vehicle. Rather than be stricken with absolute confusion as to how a creature could even exist, they instead decide the best course of action is to domesticate it so they can earn money from trained services. This sends them down an absurd path where one unusual situation leads to another.

As stated, there is a quality to Dupieux’s methods as a storyteller that can make one interested, if not totally invested. There’s a charm to the nonsensical tale laid out, almost childlike in its efforts to simplify the rules and provide convenient events that propel the narrative forward. This is obviously a world in which the interaction with giant insects is not treated as an unusual phenomenon by the protagonists. However, so much of this indulgence ultimately comes across as shallow and dry, particularly with little initial setup. There’s a steady escalation of stupidity that struggles to create proper stakes for the characters and does not infuse any real tension for the plot to become more engaging. A familiar mark on many of Dupieux’s works seems to be a desire to portray a setting that is inhabited by weird characteristics, but further nuance is mainly absent. The excursion is mercifully short at less than eighty minutes, but a more captivating journey is elusive.

This cast operates in a similar register of the material, leading their performances to become infused with peculiar mannerisms without much substance attached. Truthfully, there is somewhat of an appealing chemistry that Ludig and Marsais share that is oddly endearing. It can become grating quite quickly to witness the sheer amount of idiocy on display. They also are playing men who are given no real incentive to grow from their misdeeds nor even recognize the pain they are causing others. Still, they are compelling in these roles, if not that extraordinary. The prop fly actually steals most of the focus away from them, as it is an excellent puppet whose actions mimic that of a devoted dog and makes it strangely bewitching.

Most of the ensemble makes little impact apart from Adèle Exarchopoulos, who plays a woman suspicious of the duo after attaching themselves to her group of vacationing friends. It’s another character marked by a quirk (she’s suffered a head injury that forces her to shout every word), yet there’s a command in her screen presence that makes her incredibly magnetic. In a script littered with half-developed motivations, she manages to make the absolute most of the little given and creates an entertaining portrayal. She delivers some of the more successful humorous bits and forges one of the only sympathetic personalities amongst the sea of narcissistic ignorance.

If there is an overall positive takeaway from “Mandibles,” it is that it doesn’t demand much from its audience. The presentation comes across as laissez-faire, with events unfolding in a bizarre yet natural rhythm. There is a specificity to the tone and filmmaking that is unfortunately not translated to the overarching story. The characterizations are not that fascinating, the narrative can be unbearably dull, and most of the performances unremarkable, save for very few exceptions. Despite all this, Dupieux is still a director whose style is wholly original. While this is another example of flawed execution, the persistence is admirable. However, the potential for a project to showcase his sensibilities with an enthralling story has yet to be fulfilled.