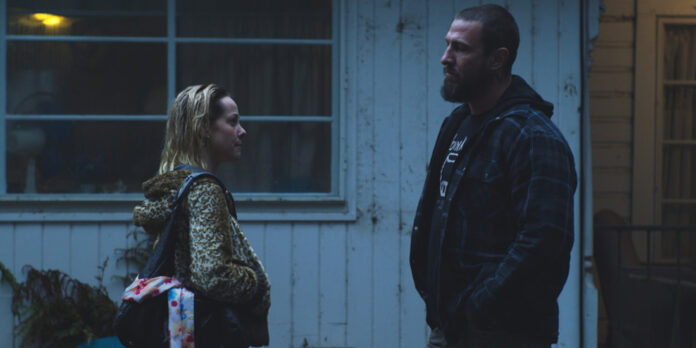 THE STORY – A man is released from prison after 15 years and reunites with his high school girlfriend, who is now a single mother of three.

​​​​​​​​​​​Early in Sabrina Doyle’s “Lorelei,” there is a moment when it becomes instantly clear that the audience is in good hands. Wayland (Pablo Schreiber) has just been released from prison after serving a fifteen-year sentence and is staying in a local church basement in exchange for help around the building while he looks for a job. That evening, the church hosts a single mothers support group, and Wayland recognizes one of the attendees: Dolores (Jena Malone), his high school sweetheart. She doesn’t see him until she sits down for the start of the meeting, and the sight of him stops her dead in her tracks. What plays out on her face, though, isn’t fear or surprise, but something else. It is as though the world has started moving in slow motion as all her memories of Wayland start rushing back to her, a mixture of warmth, longing, and maybe even a little relief. There is an instant recognition that her life has not been going well since they last saw each other and that this might just be the turning point she’s been hoping for.

It might just be the turning point Wayland has been looking for, too, if he can open himself up enough to Dolores and her three children (each of whom is named after a different shade of blue)… and if he can stay on the straight and narrow. It is entirely to Doyle’s credit that “Lorelei” mostly stays away from the convict attempting to go straight tropes, choosing instead to focus on Wayland and Dolores and their relationships to themselves as well as with each other. These are two people with complicated lives, both together and apart, and Doyle’s screenplay spends most of its time exploring their past mistakes, their hopes for the future, and their present-day fears. Wayland’s biker club makes plenty of appearances but remains very much a side story, just one thread of the fabric of the central characters’ lives.

Malone and Schreiber, two of our most interesting actors, are more than up to the task of carrying the film. Their white-hot chemistry goes a long way, but their own peculiarities as performers prove to be a perfect match as well. Malone’s prickly, live-wire energy bounces beautifully off of Schreiber’s stolid exterior, occasionally piercing through it to let out some of his carefully concealed inner light. Neither of them ever take the easy route towards building their characters, fully embracing and even emphasizing their worst personality traits. The result is a central romance that feels deep and lived-in, one that we want to succeed because we want the characters to become worthy of each other.

Doyle, writing and directing her first full-length feature, never takes the easy route either, having her characters make decisions that aren’t easy to watch but always feel true. The ensemble gives the almost-rural Pacific Northwest neighborhood real depth, and every scene hums with the type of specificity that brings you deeper into the film’s world. Doyle knows that still waters run deep, and while “Lorelei” looks simple on the surface, she trusts the audience to see what’s going on underneath without her pushing. It’s a skill that serves her well and marks her as one to watch in the years to come.