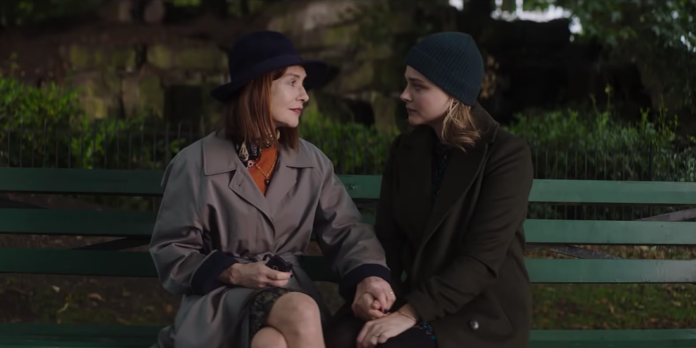 THE STORY – Frances finds a handbag on the New York subway and promptly returns it to Greta, an eccentric French piano teacher who loves tea and classical music. Having recently lost her mother, young Frances strikes up a seemingly harmless friendship with the lonely and kindly widow who enjoys her company. But when Greta’s behavior becomes increasingly erratic and obsessive, Frances does whatever it takes to end the toxic relationship before things spirals out of control.

​”Greta” knows exactly what it is. It doesn’t strive to be anything more than a B-level stalker film aided by some cheesy thriller filmmaking and two central performances from Isabelle Huppert and Chloë Grace Moretz. Writer/Director Neil Jordan is having fun with the horror/thriller genre in ways that makes “Greta” digestible without feeling too silly for its own good. There’s also an attempt at a deeper examination behind creating surrogate family members in the face of depression and loneliness. It may not be an awards film. It may not be a great film. But it’s certainly one you probably won’t regret seeing.

Frances (Chloë Grace Moretz) is a young woman from Boston who is living in New York City with her best friend (Maika Monroe) following the death of her mother. One day, she discovers a handbag on the subway and decides to return it to its owner. That person is Greta (Isabelle Huppert) a middle-aged French piano teacher who lives alone and loves classical music. The two form a brief bond over their loneliness until Frances discovers that Greta is a mentally ill stalker who has lured others into her life before with obsessive and dark desires. Frances tries to cut Greta off but the relentless widow refuses to leave her alone, resulting in a chain of events that begins to spiral out of control.

Neil Jordan’s latest film is not a subtle one. Nor does it overstay its welcome or try to reach beyond the limits of its genre. He’s telling a very simple story of a deranged woman who is stalking a young woman in New York City. On the surface, there really isn’t all that much there. However, it’s the performances by Isabelle Huppert and Chloë Grace Moretz which sells this campy thriller as an enjoyable good time at the cinema.

Huppert is delightfully manic, creepy and believable in all of the right ways. Seeing a legendary actress of her stature let loose and have fun here is the film’s number one most enjoyable aspect, which I’m sure will result in a ton of iconic memes and GIFs for the future. The filmmakers also go an extra length to add a layer of subtle makeup to her face to highlight the contrasts on her to give her a more spooky look which helps with the unease and tension her very presence causes. Chloë Grace Moretz continues to show us more range in her acting choices as a woman trying to move on from the death of her mother and coming to grips with a life of loneliness.

And that’s my favorite quality of “Greta” (besides the performances) is its look at loneliness. Frances is never truly alone for she lives with her best friend and has a father who loves her despite not being around due to having moved on from his wife’s death(It’s interesting that the only two male characters in the film are pretty much regulated to the sidelines, giving this female-led story a pro-feminist quality of somen supporting women). However, Frances cannot seem to reconcile her new reality and instead pushes those who love her the most away, until she meets Greta and gives this mentally unstable woman the attention and attachment that she herself is seeking. Jordan sets up a scenario where both women need each other. It’s no surprise that the scariest moments of this movie are when Frances is alone and we think Greta might emerge from the shadows at any moment. Loneliness is a real fear for some people in this world but it does not have to be. Jordan’s film puts forward the argument that even in our darkest time of complete hopelessness, we are never truly alone.

Frances tells Greta at one point that she “is like chewing gum. I tend to stick around.” While I don’t expect “Greta” to stick around for many years in our minds, it’s not a terrible time at the movie theater either. Both Isabelle Huppert and Chloë Grace Moretz give wonderful performances which help to elevate the material. Plus, Neil Jordan has some interesting commentary on depression and loneliness which helps to give “Greta” a heart in the face of some campy horror/thriller elements, which with a weaker script could’ve resulted in a laughing stock of a movie.