“LIGHT OF MY LIFE” 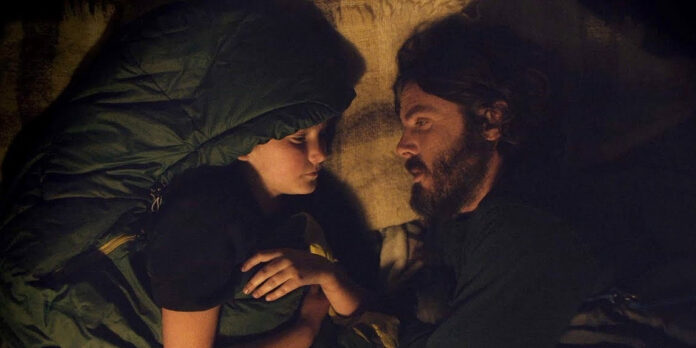 THE STORY – A father and his young daughter become trapped in the woods in a post-pandemic world.
​
THE CAST – Casey Affleck, Anna Pniowsky, Tom Bower & Elisabeth Moss
​
THE TEAM – Casey Affleck (Director/Writer)
​
THE RUNNING TIME – 119 Minutes

​​Casey Affleck’s debut film “Light Of My Life” opens with many similarities to Debra Granik’s “Leave No Trace,” with a daughter called Rag (Anna Pniowsky) and her father (Affleck) living in the wilderness, away from civilization, and any potential threat. Only there’s something odd about their situation, the girl is dressed like a boy, her hair is cut short and when an old man stumbles onto their camp, her father tells her to hide. There’s a sense of danger if Rag would reveal to others that she is, in fact, a girl, but is this just the father’s paranoia or is there a real threat to her life?

Slowly the reason for the father’s overprotectiveness is revealed as the reality of the situation is revealed through small snippets of information. After being told a story involving two foxes who are separated by Noah’s Ark, Rag replies back that she is the last of her species, and perhaps she is. Several years ago, a deadly virus spread across the globe only affecting women, and in a series of brief flashbacks, we discover that Rag’s mother (played by Elizabeth Moss) succumbed to the disease. Somehow, Rag is immune to the virus and left to survive in a nightmarish patriarchy.

The gravity of the situation is that with the loss of the female population, society has essentially broken down into sheer lawlessness and unrest. As Affleck’s character describes it, there has been a total loss of balance in the world. The threat is real, some men will hurt Rag in the foulest of ways. There are rumors of women living in underground bunkers to avoid being found and being brutally raped. Chillingly, it is revealed that baby girls are being farmed in laboratories to avoid the human population from dying out. The film evolves into a struggle to keep one step ahead and to survive at all costs

“Light Of My Life” feels like the faithful adaptation of a classic dystopian novel that never was. Its narrative and premise are very reminiscent of the likes of Margret Attwood’s “The Handmaid’s Tale,” or Cormac McCarthy’s “The Road,” or even P.D.James’ “Children of Men,” all of which have been adapted to the big screen. However, “Light Of My Life” is an original screenplay penned by Affleck, and while its story of a father trying to protect their offspring in a dystopian world has been explored before, Affleck does enough to keep the premise fresh and innovative, with the story focusing mostly on how a single father must cope with his daughter’s inevitable journey into womanhood.

One gets the sense that this is a very personal film for Affleck who apparently wrote the script at during his divorce. There’s a deep sense of sadness and loss that resonates throughout the film and at times it feels slightly too deary. However, it’s not all doom and gloom as there’s much to enjoy here. Affleck proves himself as a very capable director as well as delivering a stellar performance. It’s his co-star Anna Pniowsky, who really shines here, and her performance reminds the audience of Tatum O’Neal role in “Paper Moon.”

The film works best when we witness the intimate and very human interactions between the two leads. Affleck has clearly adopted David Lowery’s approach to storytelling by allowing long scenes to unfold in front of the camera, and avoid the reliance on editing and close-ups. Like Lowery’s “A Ghost Story” (in which Casey Affleck starred in), “Light Of My Life” is a slow, steady burner but we never feel frustrated by the lack of action. This is very much a character-driven story, and when the violence and action finally erupts on the screen it’s shocking and brutal, reminiscent of Lynne Ramsay’s “You Were Never Really Here.” However, the action feels a little disjointed, and it’s hard to follow in the dimly lit setting, with Affleck’s decision to use natural light sources.

Other highlights include Adam Arkapaw’s beautiful cinematography that manages to capture the vast natural beauty of the wilderness and the nightmarish dystopian urban setting when Rag and her father wander into town. Daniel Hart’s score is eerie and haunting, which suit the film’s scenario perfectly. Hart scored David Lowery’s “Ain’t Them Bodies Saints” (in which Affleck also starred in) as well as “A Ghost Story,” so it only seems natural that he would compose the music for Affleck’s debut.

Overall, Affleck has proven himself to be a more than capable director with this very fine debut film. Yes, at times the film’s pacing feels a little bit of a drag and some viewers may be frustrated by the lack of action, but this is a very beautiful and touching film with an astonishing and breathtaking performance from Anna Pniowsky. Personally speaking, I’m looking forward to seeing more from both Affleck as a director and Pniowsky as an actor.