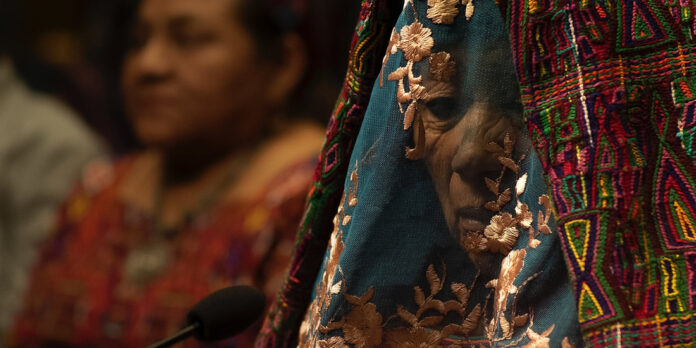 THE STORY –  In Guatemala, Alma is murdered with her children during a military attack. Thirty years later, the general who ordered the genocide is found not guilty, and Alma comes back to the world of the living to torment Gen. Enrique.

The best horror films serve two different functions. The first, of course, is to unnerve the audience and provide scares that linger in their psyche. Most horror films meet this function because it’s the selling point that puts viewers in seats (or, more recently, viewers on couches). The second is a bit more difficult, however. A horror film’s secondary function is to take a social issue or a tragic occurrence and use the tropes of the genre to communicate a real-world message. Some horror films collapse into a pretentious heap when they attempt said function, but others, like “La Llorona,” reach a sublime height.

“La Llorona” is modeled, in title and in story, after the Latin American folk legend of the same name. English-language audiences were subjected to a bland, unremarkable treatment of the legend with 2018’s “The Curse of La Llorona,” so it’s refreshing to see a more nuanced take from Guatemalan director Jayro Bustamante. Instead of relying on pop culture iconography to sell the film, Bustamante uses the “La Llorona” foundation as a jumping-off point to explore themes like racism, classism, and generational trauma.

The film details the public trial of Enrique Monteverde (Julio Diaz), a Guatemalan dictator who orchestrated the genocide of native Mayans in the 1980s. Now an older man, Montverde must rely on the support of his wife Carmen (Margarita Kenéfic), his daughter Natalia (Sabrina De La Hoz), and his granddaughter Sara (Ayla-Elea Hurtado); each of whom grow increasingly weary of his innocence as the trial wears on. Monteverde is ultimately acquitted, but the Kaqchikel community’s backlash leads most of his servants to resign. Pressed for help as protests form outside his home, Monteverde agrees to hire the mysterious Alma (María Mercedes Coroy).

It’s clear from the onset that Alma has a private agenda. Bustamante and cinematographer Nicolás Wong pose the character unlike any other in the film: center frame, static, often with her long, dark hair obscuring her face. There’s something otherworldly about her, and the filmmakers gleefully keep us off guard by embellishing this quality in one scene and downplaying it in another. There’s one masterful shot of Alma sitting on the floor, with her hair flowing in a ghostly, unnatural pattern. Seconds later, we realize that she’s merely getting her hair blow-dried by a playful Sara. Our suspicions remain maddeningly, fascinatingly, unconfirmed.

Flourishes like these may have felt cheap in lesser hands, but Bustamante displays surgeon-like precision regarding the film’s pacing. From the opening seconds onward, “La Llorona” moves at a purposely measured and mournful pace. It might try the patience of some viewers, but I think it works marvelously as a means of ratcheting up the suspense. Too many horror directors are eager to coast through the “lesser” bits to get to the scares, but they play their hand in doing so. They slow the pace only when a scare is coming, which effectively ruins the element of surprise. “La Llorona” takes its time, which hints at the possibility of horror in every scene. Bustamante understands that the suggestion of the supernatural is oftentimes more harrowing than the supernatural itself.

The film’s handling of social issues is done to support rather than detract from the chilling atmosphere. Monteverde is a predatory monster who spies on Alma and barely shows remorse for the genocide of her people. He’s not so much a character as he is an immovable object that the other characters must navigate. Natalia flip-flops between supporting her father and condemning him. Carmen copes by denying all of her husband’s misdeeds,  but a series of increasingly violent dreams force her to come to terms with the monster sleeping next to her. It’s fascinating to see each of the women find their own way of coping, and it’s a testament to Bustamante and co-writer Lisandro Sanchez that the characters’ paths feel organic rather than inevitable.

There are some traditional “scary moments” scattered throughout (Alma walking through the house in a white nightgown feels like an homage to classic gothic horror), but the film is at its best when it’s turning genre tropes on its head. Most of the film takes place during the day, contrary to most ghost stories, and the granddaughter, despite some close calls, is never placed in peril the way a cliched script would dictate. Perhaps most ingenious, however, is the way the film uses the protesters. Monteverde’s house is surrounded by protesters at all times, meaning the sounds of their chants break up even the quietest moments. Horror is often about isolation, and the decision to use an angry mob to further the isolated feelings of Montverde and his family is an inspired one.

The biggest issues with “La Llorona” occur in the film’s climax. I will do my best to avoid spoilers because the explanation behind Alma’s motives should be witnessed in all its harrowing power. I will instead say that the film does such a good job of building up the dissent between Monteverde and the women in his family that it feels unfulfilling when only one of them takes an active role in his fate. The other characters feel sidelined to an extent, especially Natalia, who feels the closest to being an audience surrogate. The very last shot also borders on supernatural camp, which is made all the more glaring because the film avoids camp for the rest of its runtime. These are relatively minor quibbles, but since they come near the end, they do impact my score.

Overall, I will say that “La Llorona” is a tightly paced and marvelously executed piece of horror. Bustamante steps his directorial game up from his already-impressive debut, “Ixcanul,” and his ability to weld genre appeal with poignant social commentary is not to be ignored. Whatever imperfections there are pale in comparison to the profound tension you feel as you watch the film. It’s the rare film that services horror fans and general audiences alike.