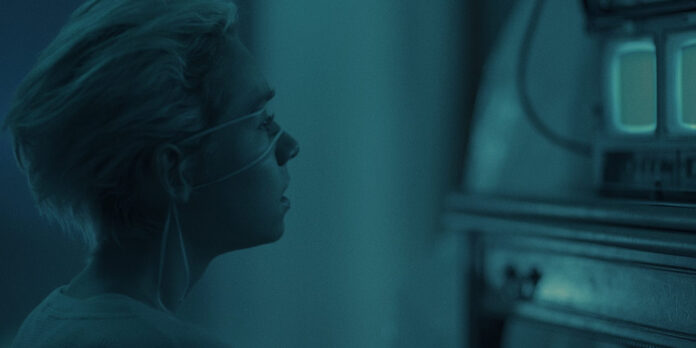 THE STORY – A teenage runaway takes part in a sleep study that becomes a nightmarish descent into the depths of her mind and a frightening examination of the power of dreams.​

There is no shortage of films that play on the horror and science-fiction genres that appeal to a very broad sensibility. It doesn’t necessarily make these movies bad, but it often means the impact they leave an audience is superficial. One can be greatly entertained by an excessive exercise in spectacle, even if it is attached to a more conventional piece of storytelling. However, when a film can fit neatly into this category’s expectations and manage to glimmer appreciation for the craft and emotional connection to the narrative, that becomes a notably wonderful thing to experience. “Come True” finds itself indulging in both of those aspects. While it succeeds in some places far greater than others, it’s an incredibly effective and genuinely haunting piece.

The story centers around a young woman named Sarah (Julia Sarah Stone), a high school senior who finds her broken home life even more troubled by the recurring nightmares that affect her sleep. One day, she notices a flyer looking for paid participants in a sleep study. As both an opportunity to earn income and have a consistent place to sleep for extended hours, she commits to the experiment. It doesn’t take long for her to realize that these scientists are working with ulterior motives, and she’s determined to find out their true intentions. Working with Jeffrey (Landon Liboiron), one of the scientists who has taken a keen interest in her, Sarah looks to uncover this organization’s dark secrets, which eventually leads to sinister revelations lurking in her own mind.

It’s quite difficult to create a film these days that can offer an authentically frightening ordeal, particularly one that can sustain that level of dread throughout its entire runtime. Fortunately, director Anthony Scott Burns can craft a moody atmosphere that’s entirely engaging. The aesthetics have a clinical nature to them that works well with the unsettling tone, employing a retro aura that harkens back to the works of early David Cronenberg, sans the explicit body horror. However, that doesn’t take away from some of the especially creepy and unnerving imagery that’s instantly memorable and immediately puts one on a nervous edge. The filmmaking is finely detailed, thanks to the stark cinematography and a gorgeous synth-heavy score – the results are highly captivating.

For as accomplished as Bruns’ direction is, it’s a shame that his screenplay isn’t nearly as enticing. The story is painted with rather broad strokes, which leaves the rules of this world undefined and the characters rather shallow. This makes the plot shockingly removed from an emotional standpoint, and it becomes difficult to be invested in these people’s plights. One certainly recognizes that the goal of the script is to enhance tone rather than deeply dive into nuanced motivation, but the flat characterizations still end up doing a disservice. The opaque mythology is also a frustrating element that uses ambiguity for disappointing conclusions. Unfortunately, the writing is so devoid of substance because it’s at great odds with the inventive and creative filmmaking.

This is also not a particularly strong showcase for performances either, though there are some good turns here. There’s a stoic relatability to Stone’s persona, which can be sincerely felt in the moments of paralyzing terror she must convey. Once again, what’s written on the page doesn’t allow for too many opportunities to plunge deep into a nuanced character, but her efforts are still appreciated. Similarly, Liboiron isn’t doing exceptional work and truthfully never strays beyond merely serviceable. Yet, he has his own oddly charming screen presence that plays in a subtle, offbeat register that can be appealing. They are the only notable players in a sea of dependable supporting actors that fill out this space nicely without ever doing anything remarkable.

“Come True” has so much that makes it a compelling work. The vivid imagery successfully creates a tone of horror that’s felt on such a profound level, utilizing the craft as a way of striking a powerful sense of unease in nearly every frame. Sadly, much of that impact is lessened by a hollow story that chooses not to texture this landscape with details that would have established a greater emotional resonance with the themes and characters. Even still, this is an often-disturbing meditation that slowly draws one into a state of tension that is terrifying to witness but mesmerizing enough to keep going. To that end, it is a fantastic example of the genre that won’t be quickly forgotten. Many similar films can’t boast that same claim.