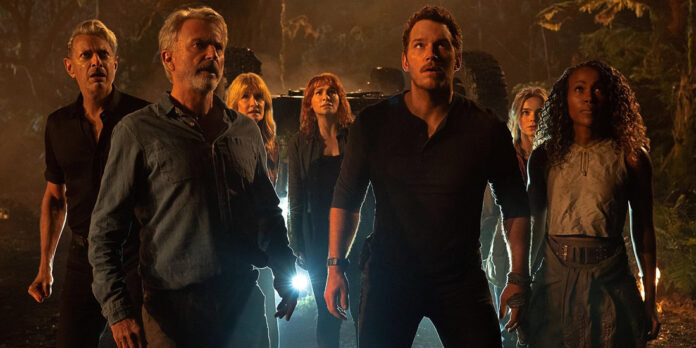 ​​​​The original “Jurassic Park” film, directed by Steven Spielberg, remains one of the most successful and influential blockbusters of all time. While two sequels followed a few years after the film’s release, it wasn’t until 2015 when the franchise was expanded with all-new characters to create a brand new trilogy that paid homage to the original films and expanded the dinosaur action from beyond the park and into the world with “Jurassic World.” While commercially successful, both “Jurassic World” and its 2018 sequel “Jurassic World: Fallen Kingdom” have received mixed to negative reviews and have been unable to recapture the magic of the original films, and certainly not the first. Now, seven years later since “Jurassic World” and nearly thirty years since the groundbreaking first film, the franchise is supposedly coming to a close with “Jurassic World: Dominion,” which attempts to fuse both trilogies with the old cast and new cast and answer a question which has been a throughline across all six films “Can humans and dinosaurs co-exist on this planet?”

The events of “Jurassic World: Dominion” takes place four years after “Jurassic World: Fallen Kingdom,” where dinosaurs are now living for the first time outside of any contained “park” and in the natural world alongside humans for good or bad. Dinosaur behavioral expert and ex-Navy soldier Owen Grady (Chris Pratt) is hiding out with former Jurassic World park manager and founder of the Dinosaur Protection Group Claire Dearing (Bryce Dallas Howard) and their adoptive (but really, stolen) daughter Maisie Lockwood (Isabella Sermon) in the snowy hills of Sierra Nevada. Eventually, Maisie and Owen’s trusted velociraptor friend Blue’s child Beta are captured by poachers who are striking a deal to hand them over to the mysterious and powerful biotech company known as Biosyn. The company is located in the Dolomite Mountains and is run by CEO Dr. Lewis Dodgson (Campbell Scott), a character we have not seen (although a different actor played him) since the 1993 original “Jurassic Park.” Meanwhile, paleobotanist Dr. Ellie Sattler (Laura Dern) elicits the help of paleontologist Dr. Alan Grant (Sam Neill) regarding the recent swarms of enlarged locusts which are destroying the world’s crops at an exceedingly effective rate. To everyone else, Biosyn and Dodgson are looking to make the world a better place by solving world hunger and other known diseases due to their breakthroughs in genetic modification led by Dr. Henry Wu (BD Wong). However, their true intent will intersect with both storylines bringing the old characters (including a returning Dr. Ian Malcolm, who is an “in-house philosopher” with Biosyn) and new characters together for the final chapter in the “Jurassic Era” story.

Despite the leaps in logic, lifeless characters, and dull storylines, the “Jurassic World” movies have managed to be financially successful as audiences still have a desire to see dinosaurs reek havoc on the biggest screen possible. The same will likely be true of “Jurassic World: Dominion,” which has the added benefit of bringing back the beloved characters from the original films for this (supposed) final film in the franchise. However, even the presence of the original trio is not enough to make up for the problems which have plagued this franchise since its re-launch in 2015.

Several subplots and characters make up this story, resulting in the longest runtime of the franchise at 146 minutes long. And even with that extra added length, there is an imbalanced emphasis on certain characters and a fumbling of certain character arcs, some of which we never cared much about, to begin with. Maybe now more than ever, Pratt’s charisma seems to have dwindled considerably as he takes a backseat to the other numerous characters in this particular movie. He still receives some action beats, which are particularly exhilarating, including a motorcycle ride through Malta as atrociraptors chase him and Claire through the city due to laser-targeting (a fascinating example of how humans are leveraging dinosaurs in the real world and on the black market, which is sadly left underdeveloped). Claire and Masie were never as interesting as the previous two films built them up to be, as they always found themselves in Pratt’s shadow, and not much has changed here, despite the story’s many attempts to get us to care about their relationship now and what Maisie’s grand purpose in this franchise actually is. Grant and Sattler are saddled with an unnecessarily forced romantic relationship now, which feels lazy compared to the platonic and subliminal friendship built on mutual respect the two shared in the 1993 film. Thanks to Jeff Goldblum’s dry humor, Dr. Ian Malcolm is still as charming and amusing as ever, but he too is not given much to do other than be present and bring some comedic relief when called upon. Campbell Scott has maybe the most perplexing performance in the movie as he plays Dodgson utterly straight with a certain detachment under his fake smile (at times, one begins to wonder if the filmmakers are deliberately trying to paint the hyper-modern company Biosyn and Dodgson, with his white hair and glasses as Apple and CEO Tim Cook) but is prone to sudden outbursts which improbably contrast against his previously displayed demeanor. By far, the best addition to the cast is the Netflix series “She’s Gotta Have It,” star DeWanda Wise. As a badass ex-Air force pilot who aids Owen and Claire in getting to Biosyn’s remote location, she displays a specific toughness and assured confidence in her physicality and overall screen presence. The takeaway from such a comment should not be to make a “Jurassic World” spin-off with this exciting new character but to give Wise her own franchise to lead because she indeed shows she has the goods to pull it off.

Most audience members won’t care about anything referenced above regarding the characters or the scattered plot, which should’ve focused on dinosaurs in the real world and instead places us right back into another tried and tired formulaic re-telling of dinosaurs in a remote sanctuary (instead of island) and the humans needing to escape. They just want to see some dinosaur action. Does “Jurassic World: Dominion” deliver on this front? Sometimes. The before-mentioned Malta motorcycle chase scene with Owen and the atrociraptors while other escaped dinosaurs from the black market ravage the streets is a lot of fun, fast-paced and thrilling. A sequence of Claire hiding underwater from a Therizinosaurus is tense. And the dilophosaurus makes a return from the 1993 film with its terrifying colored neck frill squirting out venom on its prey. However, as was the case with the last two films, these new movies’ reliance on CGI over practical effects drains the life out of what should be a rousing experience for audiences, just as the original films were. There’s also a distinct lack of a high body count in “Jurassic World: Dominion,” which seems to favor dinosaur on dinosaur action and dinosaurs attacking vehicles and other structures the characters seek safety in rather than dinosaurs eating and mauling humans. For a franchise that was so expertly able to blur blockbuster action with intense moments of horror, these new films seem more content with delivering more of the former rather than the latter.

“Jurassic World: Dominion’s” grand sound design remains as loud and dynamic as ever, but much like the visual effects, not much seems to have improved from 2015. And while Michael Giacchino does what he can with the score, it will never match the sound of John Williams’ iconic themes from the original “Jurassic Park.” And that’s something which needs to be addressed. After helming “Jurassic World” in 2015, director Colin Trevorrow returns to the franchise (after J. A. Bayona stepped in for “Jurassic World: Fallen Kingdom“) with this final chapter, and instead of embracing the elements these three films got right (which wasn’t many, but still) he and his co-screenwriter Emily Carmichael oddly find ways of reminding the audience how inferior these three new films are compared to the originals. Dr. Ian Malcolm even cracks at one point when Jurassic World is mentioned in conversation, “Jurassic World…not a fan.” While there will always be reverence for “Jurassic Park,” and even a nostalgic passion for its sequels “The Lost World” and “Jurassic Park III,” to so blatantly point out what the audience has known all along about this new trilogy is demeaning and embarrassing. Depending on your love for the franchise, “Jurassic World: Dominion” might be your favorite of the three new films, or it might be the worst. But one thing is for sure: after three middling attempts to recreate the entertainment and awe-inspiring epicness of “Jurassic Park,” it’s finally time for this franchise to go extinct.