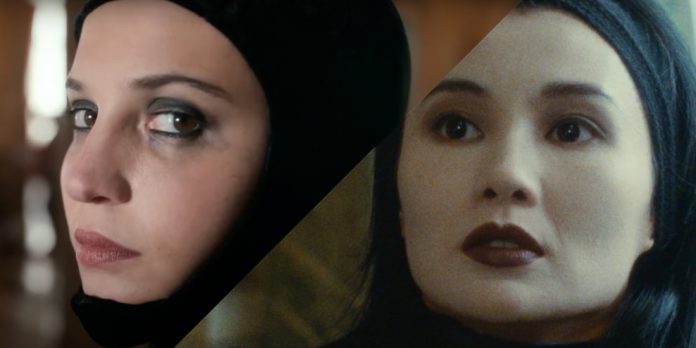 ​​The origin of Olivier Assayas’ new HBO television miniseries, “Irma Vep,” was born over a hundred years ago with Louis Feuillade, the writer and director of the 1915-16 crime serial “Les Vampires.” Consisting of ten episodes, the film follows a journalist’s attempts to uncover the goings-on of the titular Parisian criminal organization. “Les Vampires” was among several crime serials released at the time. Audiences had to return to the theater over the span of several months to see the story’s completion, comparable to the future medium of must-see television. One character managed to endure the following century with her cultural impact: The gang’s sole female member, Irma Vep, played by dancer, acrobat, filmmaker, and writer Musidora (née Jeanne Roques). Musidora was the prototypical vamp popular in the 1910s, akin to American actress Theda Bara. The vamp style would soon fall out of fashion by the end of the decade, as would film serials. Still, the influence of “Les Vampires” and Musidora would continue to be felt in the decades to come, as seen today with the positive reactions to “Irma Vep,” which had its premiere episode on June 6th.

Assayas first dipped his toe into the world of “Les Vampires” in 1996 with his film, “Irma Vep,” which had its world premiere at the Cannes Film Festival that same year. The film is metafiction, like Francois Truffaut’s “Day for Night,” in which the French director plays a version of himself directing an absurd romantic drama amid the constant onset of conflict. Assayas’ film follows a French film crew trying, despite many setbacks, to remake “Les Vampires,” with Assayas casting Hong Kong superstar Maggie Cheung as a fictionalized version of herself set to play the leading role originated by Musidora. Her director is René Vidal, an eccentric, rambling, unpredictable man played by French New Wave child star Jean-Pierre Léaud, who himself played a selfish young actor in “Day for Night.”

Now, Assayas has returned to the story of Irma Vep and “Les Vampires” with the HBO miniseries starring Alicia Vikander. Given that this series, still titled “Irma Vep,” is made by the same man who created the film on which it is based, this new rendition of the story could be best labeled a continuation rather than a remake; a continuation that attempts to further blur the line between fiction and reality, to somewhat confusing and unsatisfying results that just may have a stroke of brilliance.

For this new miniseries, it is a good idea to familiarize oneself with “Les Vampires” (even if you aren’t willing to sit through its seven-hour runtime) but watching the 1996 version of “Irma Vep” is essential. The concept and cultural knowledge required for viewing this miniseries may be cause enough to deter some viewers and positively delight others. Still, despite their similarities, there are differences that allow the two to exist as separate entities, beginning with the casting of their respective leading actresses.

In 1996, Maggie Cheung was a major star in Asia. Having already become a household name through both action and drama films, she arrives at the scene in “Irma Vep” completely as herself. Even those unfamiliar with Cheung’s work can tell just from her appearance and ease in front of the camera that they are viewing a woman with that particular “it” factor. Though scripted and a work of fiction, the film refers to Cheung’s real-life status as an action hero and comments on her fish-out-of-water position as an Asian woman working with a primarily white crew. Instantly, this is a massive difference from the character played by Alicia Vikander named Mira (in four episodes, no one has mentioned that her first name is an anagram for Irma). It’s clear early on in the miniseries that Assayas has taken away an aspect that made his 1996 film so special and unique. While the original film used scenes from Cheung’s past filmography to illustrate her career, Mira is shown attending the premiere of her latest action movie and doing a photoshoot in sci-fi drag, laser guns included. We see her sign autographs, take selfies with fans, and do press junkets. For Cheung, audiences were expected to believe, without needing overt evidence, that she was a famous star. In the case of Vikander, we need some convincing.

There is further confusion in the presentation of just what kind of star Mira is. Her character in “Doomsday” (the fictional film through which Mira has established her fame) is an overtly feminine, sexy, “strong female lead” android-esque character, with a mix between Darryl Hannah in “Blade Runner” and Mila Jovovich in “Resident Evil.” It’s hardly the basis for the making of a mega-star in 2022. Of course, there is also the question of language. Vikander does not hide her Swedish accent perfectly, making her seem much more comfortable around her French-speaking crew as a fellow European. On the other hand, Cheung often finds herself linguistically lost, as she does not speak French, and her crew does not speak Cantonese. Between her and the rest sits the liminal space of translation.

​Vikander does, however, possess a skill essential to the role of Irma Vep: She was trained as a ballet dancer in her childhood and teenage years. Because of this background, she brings a notable amount of physicality and grace to her roles. For example, her groundbreaking role in Alex Garland’s “Ex Machina,” in which she plays a highly sophisticated robot with A.I. technology, required Vikander to move in a manner unprecedented on film, and that same physical range is evident in “Irma Vep.” In her day-to-day life as Mira, she is relaxed, casual, and almost masculine in her presentation. When she slips on that black velvet catsuit, her whole form completely changes as she delicately walks on the tips of her toes without making a sound. She moves slyly against walls, hiding around corners and dashing through hallways like a black cat on the hunt.

As in all movies about movies, Assayas’ own voice is represented by director character René Vidal (one of a few characters who keeps their name from project to project). Léaud plays the mentally unstable René with quirks and a demanding personality, requiring his crew to bow to his every whim and walk around on eggshells. Like the miniseries’ version of René (played by Vincent Macaigne), he sees something in the original Feuillade film that others do not, even if they pretend to. He considers the work to be a masterpiece of mystery and suspense, one that ranks highly in film history. Maggie/Mira admires the man for his passion and dedication to the project but, like any modern viewer, finds themselves alienated (and frankly, bored) with the seven-hour venture. The conflict of the production corresponds with his mental deterioration. While Léaud’s René comments that it would have been “blasphemous” to cast a European woman as Irma Vep and that he chose Maggie due to her grace, magic, and power, Macaigne’s René reveals more personal reasoning behind his casting decision. This is another point where those unfamiliar with Irma Vep’s cinematic history may begin to feel left behind as Assayas comes

This René, as we eventually learn, has already made a film adaptation of “Irma Vep.” Though producers pressure René to cast a Chinese actress in the lead to appeal to their Asian market, he relays to his therapist that he is unable to work with a Chinese woman in this role due to the “ghosts” of his past relationship. The series uses footage of Cheung in the 1996 film as a stand-in for Jade, linking the series directly to its cinematic predecessor and making the line between reality and fiction even harder to see. In real life, Assayas married Maggie Cheung in 1998, two years after the premiere of their film, and divorced in 2001. Cheung, like Jade, has not acted in almost two decades.

​Through this relationship between René and Jade, Assayas explains to the audience why he made the decision to return to this story after twenty-six years; not to focus on a bustling television set or a woman’s feelings of isolation in a foreign country, but to re-evaluate and come to terms with his marriage to Maggie Cheung. Jade asks, “How does it feel making ‘Irma Vep’ without me?” As the series progresses, we will find out if it serves as a love letter, an apology, or a confession.

As with all remakes and reboots, it is impossible to critique the latter without considering the former. Naturally, one cannot watch the miniseries without comparing its strengths and weaknesses to the 1996 film. Assayas knows this and attempts to circumvent this comparison by outwardly acknowledging the former’s existence, asking the audience, and critics, to view them as a coexisting pair. Characters in the series even acknowledge how adapting “Les Vampires” into a T.V. show is more authentic to the story’s original medium than a film, reminding audiences that the medium is the message. Feuillade, Musidora, and “Les Vampires” have obviously had a profound, artistic influence on Assayas, and for his next trick, it would be welcome to see him actually take a stab at directing a film or television adaption of “Les Vampires” like the one he has dangled over our heads for the past 26 years.
​
“Irma Vep” îs currently airing on HBO and can be streamed weekly on HBO Max. The 1996 film can be purchased through the Criterion Collection here.

Have you seen either version of “Irma Vep” yet? If so, what do you think of each? Please let us know your thoughts in the comments section below or on our Twitter account.