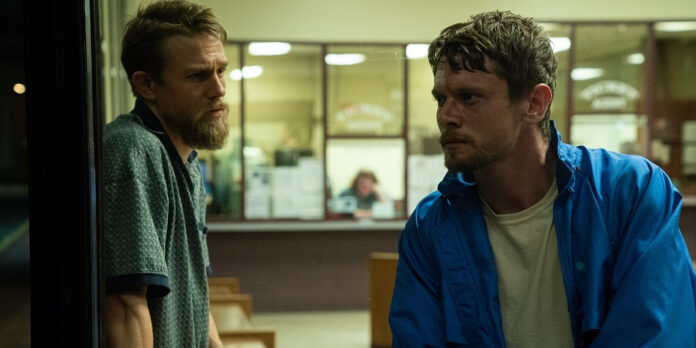 THE STORY – A reluctant bare-knuckle boxer and his manager brother must travel across the country for one last fight, but an unexpected travel companion exposes the cracks in their bond along the way.
​
THE CAST – Charlie Hunnam, Jack O’Connell, Jessica Barden, Jonathan Majors & John Cullum

​In a movie that recalls memories of “The Fighter” and “Warrior,” it may surprise people that “Jungleland” is less about the bare-knuckle fighting that the marketing has promoted and more about the sometimes tender and sometimes psychologically abusive (but always loving) relationship between two brothers. Director Max Winkler (“Flower”) is less concerned about making a genre film as he merges elements of the sports drama and the crime drama into his latest. But make no mistake, this is a pure drama. And although it has a few flaws here and there to prevent it from being the champion it thinks it is, the performances by the cast help to keep this one in the fight.

Lion Kaminski (Jack O’Connell) is a bare-knuckle boxer who is fighting in low-key fights for small amounts of money with his brother Stanley (Charlie Hunnam) at his side as his trainer and “business manager.” Through a series of poor decisions and misjudgments, Stanley and Lion are living in a repossessed house, with very little money (other than what they make from working a sweatshop), their dog and practically no options to make a future for themselves other than for Lion to keep winning fights. When a local crime boss comes to collect on money that Stanley owes him (Jonathan Majors), the brothers are faced with an ultimatum: deliver a girl (Jessica Barden) across the country for a chance to get placed on the fighting card for the $100,000.00 prized even, “Jungleland,” or get killed. Along the way, Lion and Stanley reflect on their current circumstances and their relationship with one another while Sky gets closer with Lion, opening his eyes to his brother’s manipulation and flaws.

As stated before, it often feels like Max Winkler is doing everything he can to make “Jungleland” defy genre conventions and instead focuses his narrative on his characters. In order for this to be effective, he needs a good cast of actors and while it makes sense to cast Jack O’Connell in the role of Lion (he previously showed us his physical toughness in the under-seen British film “Starred Up”), the casting of Charlie Hunnam as his mentally stressed and irresponsible brother Stanley is a complete surprise. Hunnam delivers one of his greatest performances, slimming down a few pounds and baring his soul in a performance that has no movie star qualities and reminds us that when paired with solid material, he can be quite a powerful character actor (also see his work in “The Lost City Of Z“). Both deliver strong and nuanced performances and the two have very believable chemistry as brothers making up the bulk of what makes this a solid movie.

Unfortunately, recent star Jonathan Majors (“The Last Black Man In San Francisco“) does not have a lot to do, but he oozes charisma in his limited screen time, while Tony Award-winning 90-year-old actor John Cullum shows up for one scene as the despicable crime boss, Colonel Yates. Meanwhile, Jessica Barden is given a ton of screen time with Hunnam and O’Connell to deliver a character who has a unique relationship with both brothers. Unfortunately, where Winkler takes her character and how she gets there is a bit dramatically unsatisfying and that goes for everyone else throughout the story.

Although the performances are good, “Jungleland” is filled with cliches you can see coming a mile away, thus making this film unmemorable and not susceptible to repeat viewings. It’s very well shot by cinematographer Damian Garcia with a humane eye that evokes an emotional response from the viewer, while Lorne Balfe’s somber score gives the film a serene yet melancholy feeling that feels grounded. All of it is in service to a human story of brotherly love, and overcoming poverty and misfortune in hopes of achieving success. it may not be a knockout but it packs a stiff jab.