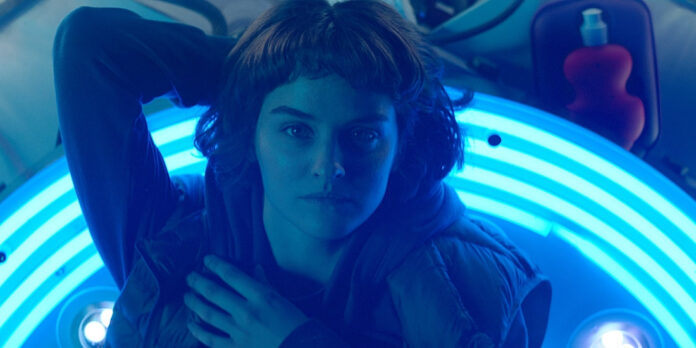 THE STORY – Jeanne, a shy young woman, lives at home with her uninhibited bartender mother and works the graveyard shift as a cleaner at an amusement park. Her mother wants her to meet a man, but Jeanne prefers tinkering in her bedroom with wires, light bulbs, and spare parts, creating miniature versions of theme park rides. During her late-night shifts she begins spending intimate time with the alluring new Tilt-A-Whirl ride that she decides to call Jumbo. Finding herself seduced by “his” red lights, smooth chrome, and oily hydraulics, Jeanne concludes that the thrilling new relationship she wants to pursue is with Jumbo.

​Objectophilia is a condition where an individual is romantically and sexually attracted to an inanimate object. The main character of Zoé Wittock’s debut film, “Jumbo,” just so happens to have objectophilia. With “Jumbo,” Wittock has weaved together a compelling and heartwarming coming-of-age drama/comedy that just so happens to center around a young woman falling in love with a Tilt-A-Whirl. Jumbo (the literal “object” of desire) is a character in itself, and the way in which it’s presented to us makes it easier for us to understand how and why Jeanne (Noémie Merlant) has become so infatuated. The film works because Merlant manages to bring so much compassion and empathy to the role, and as a result, we become fully invested in this rather peculiar romance and we’re rooting for her.

Jeanne is a socially awkward young woman who still lives at home with her mother, Margarette (Emmanuelle Bercot), and makes mechanical models of fairground rides in her spare time. It’s the summer, and Jeanne has landed a job working in the local theme park. Her mother drives her to work every day blaring out old pop songs and singing along. At work, Jeanne has attracted the unwanted attention of a colleague (Bastien Bouillon), but she only has eyes for Jumbo. The ride seems to be alive and communicates to Jeanne through flashing lights, playing around with her portable radio, and during one cleaning session, Jumbo actually saves Jeanne from falling.

Soon, a relationship blossoms between this extremely unlikely couple with a strange, alien-like love scene that wouldn’t look out of place in “Under the Skin”. As sex scenes go, it’s perhaps one of the most beautiful and surreal. There’s even a morning-after scene that follows, where Jeanne must travel back home on the bus with her face and clothes smeared in Jumbo’s oil. She imagines all the fellow passengers glaring at her and passing their judgment. Soon it all becomes too much to keep secret and she’s compelled to tell her mother the truth and introduce her lover, but will her open-minded mother be so accepting?

Merlant is simply wonderful as Jeanne in what must have been a very challenging role. She seems fully committed to the character and her motivations. Jeanne and her sexuality are presented to us in a sensitive manner, and at the very beginning, we’re told that the film is based on true events. There have been a few documentaries on the topic of objectophilia, and some of the documentaries seem to be exploiting individuals for entertainment purposes. Here, Jeanne is shown to be an intelligent and creative young woman who’s simply trying to understand her sexuality. We never get the impression that Wittock is making fun of Jeanne and this isn’t a deep film about psychoanalysis, but rather, a simple and slightly unconventional love story.

The real crux of the film is the mother/daughter relationship between Jeanne and Margarette. Jeanne seeks guidance and wisdom from her mother, but Margarette is more concerned with being a friend rather than a motherly figure. It’s not only Jeanne who’s struggling to contain her sexual desires: Margarette begins dating a man from out of town. Both women are going through an identity crisis and see a sexual partner as a way to fulfill their lives. As Jeanne begins to outgrow the nest and find her own identity, her mother begins to lash out and resent her. Their relationship is just as fascinating to watch as the relationship between Jeanne and Jumbo.

Aside from the performance by Merlant, and the well-written screenplay by Wittock, there are also other aspects such as Thomas Roussel’s foreboding, electronic score, and cinematography by Thomas Buelens. There’s a good use of high angle shots which create the sense that Jumbo is indeed alive and peering down at Jeanne as well as showing just how isolated she is. It’s also worth mentioning the brilliant use of color which helps make the film feel so alive that it almost vibrates off the screen.

It may be the case that “Jumbo” will be too much for some viewers to handle, what with its nudity and its sexual content. It’s certainly a film for mature audiences and may make for uncomfortable viewing with your parents. And, at just over 90 minutes long, the film feels a little short, with an ending that’s over far too quickly. However, for Wittock’s first feature-length debut, she has certainly made quite an impact, and Merlant continues to impress with an extraordinary performance. “Jumbo” is certainly one hell of a ride.