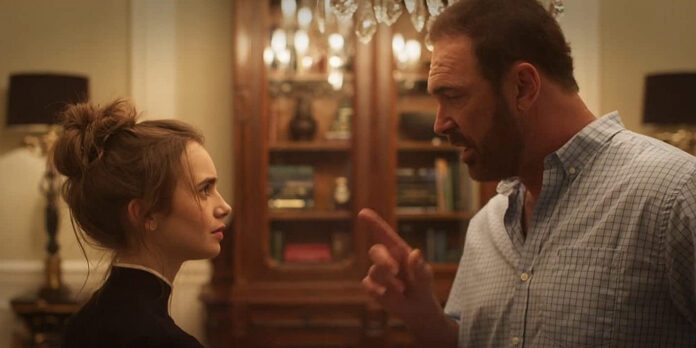 THE STORY – A patriarch of a wealthy and powerful family suddenly passes away, leaving his wife and daughter with a shocking secret inheritance that threatens to unravel and destroy their lives.
​
THE CAST – Lily Collins, Simon Pegg, Connie Nielsen, Chace Crawford & Patrick Warburton
​
THE TEAM – Vaughn Stein (Director) & Matthew Kennedy (Writer)
​
THE RUNNING TIME – 111 Minutes

​​​A good thriller is often a difficult thing to come by. The quantity is never an issue but the search to find one that is appealing with its story and characters can be fraught. The potential is always there to find something that keeps you invested as the tension winds up as things start to unravel, but most of the time the result is a more middling affair. There is no doubt that “Inheritance” aims to be a film that successfully creates a suspenseful aura where the audience is captivated by an intriguing premise. Sadly, it never reaches those heights despite some talent on display.

In the film, Lilly Collins stars as Lauren Monroe, a member of an important and wealthy New York family with deep political influence. The death of her father has just occurred in the midst of a whirlwind of events, which include a high-profile court case she is prosecuting as District Attorney, and her brother’s controversial re-election campaign. When the will is read, Lauren finds herself inheriting a secret that leads her to the discovery of an undisclosed bunker on their estate hidden underground. Inside is a man calling himself Morgan (Simon Pegg). He is chained up in a tiny room for what appears to have been decades. What starts is an uneasy bond between the two as she investigates why he’s been locked away for all these years and the twisted discoveries she will find along the way.

The elements that go into crafting this story to keep it compelling are unfortunately not really present throughout this film. Director Vaughn Stein does a competent job to create a moody atmosphere that builds upon the tension between these characters interacting with one another. However, most of the directorial efforts come across as rather flat. Even as it tries to keep up the suspenseful tone as a thriller, the exploration of this mystery never feels that stimulating. It should be noted that the skills on display are certainly polished, but the efforts lead to something that is unremarkable. Even when the film succeeds most at being engaging, it’s difficult to say if it’s truly the work of the filmmaking or just the effectively creepy score.

While the direction may be solid but lackluster, the screenplay by Matthew Kennedy actively creates hindrances. The story feels poorly constructed with how it unravels, particularly in regards to its characters that seem inconsistent in their motivations from scene to scene. The overall plot doesn’t have a great sense of momentum which ultimately contributes to a languid pace. Even the moral question at the core is ill-defined and ultimately does not provide any interesting layers of complexity. All of these issues are particularly felt by the finale, an overwrought and histrionic indulgence that loses all sense of logic and makes everything fall apart. The ending completely goes off the rails and leaves one with great dissatisfaction.

The central dynamic between Collins and Pegg is what contributes to most of the provocative elements of the story, and while their performances are not extraordinary, they do their best to inhabit these characters. Collins actually captures some depth and nuance in a conflicted character that seems to be more than what’s in the material. It’s quite a commendable effort from her. While it seems like Pegg could often dig deeper into his portrayal, there is an uneasy presence he brings that is quite different from the sillier roles we’ve seen from him before. The mixture of sympathy and menace reach a nice balance, despite that characterization feeling less defined by the end. The rest of the cast is populated by well-known faces like Connie Nielsen, Chace Crawford, and Patrick Warburton, but they don’t provide much of an impact overall.

In all honesty, most of “Inheritance” comes across as a film that is capable in its filmmaking and performances but doesn’t quite have the ingredients to be anything unique. There is particular value in watching the interplay between the two leads, and there are times when one is drawn into this unfolding mystery. Still, the story as a whole never becomes that alluring and it leads to weak characterizations, shallow themes, and an ending that values shocking reveals and tiresome exposition. It isn’t the worst that this genre has to offer, but it is nowhere near the best either.