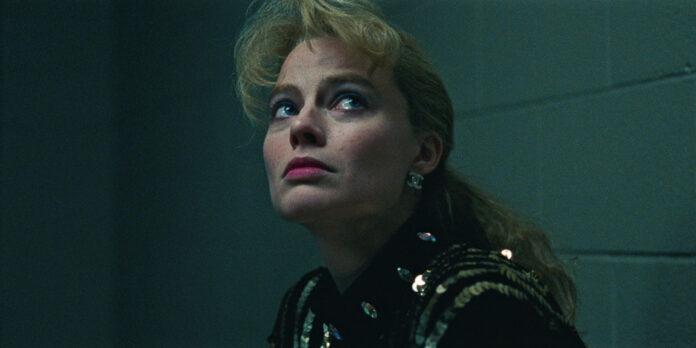 THE STORY – Tonya Harding rises through the ranks of competitive figure skating only to find disgrace when her husband tries to eliminate her rival.
​
THE CAST – Margot Robbie, Sebastian Stan, Julianne Nicholson, Bobby Cannavale & Allison Janney

​Tonya Harding was vilified by America after the news broke that she, her husband and their bone-headed accomplices hatched a plan to assault rival figure skater Nancy Kerrigan at the 1994 Olympic Games. In a fake interview where Tonya is attempting to tell the audience the true story behind what really happened, she even tells us that we are just as bad as those who abused her, her entire life. That is the power of Craig Gillespie’s “so bizarre it has to be true” biopic on the life of Tonya Harding. It’s not so much about the famous “incident” that made her the second most popular person in the world after Bill Clinton during the early 90’s. Instead, it is a brutal, hard and unrelenting look at both physical and psychological abuse that gives the audience a window into who this woman was and how she got caught up in one of the biggest media coverage stories of all time. Who would have ever thought figure skating could be this interesting?

All throughout her life, Tonya Harding (Played at a young age by Mckenna Grace and then as an adult by Margot Robbie) has been coached and trained by her vulgar, abusive mother LaVona Fay Golden (Allison Janney) who pulled her from school and devoted all the money she ever made to make her daughter into a world class figure skating champion. Her tumultuous relationship with her mother and later with her husband Jeff Gillooly (Sebastian Stan), leads her down a path from competing in the Olympic Games, to the focus of a 24/7 media news cycle centered around a bizarre hit attempt that left her competition (Nancy Kerrigan played by Caitlin Carver) with a broken knee and Tonya’s whole entire existence in jeopardy.

Harding is a strong character who is given energy, spunk, vulnerability, and life by Margot Robbie in what is easily her best performance to date. She has the difficult task of getting American audiences to re-think their perceptions of Tonya Harding by understanding her ambitions and hopefully, sympathizing with her by the end of the film. For what Tonya represents is a beacon of hope for anyone suffering from abuse. At first, she believes it’s her fault for constantly getting hit by those in her life who are supposed to love her the most and yet, through it all, she continues on, fights back and sticks a middle finger up to anyone who dares to come at her next. Starting at an early age, from her own mother, with constant verbal assaults, smacks along the side of the head and heartbreak after heartbreak that would only get worse as she got older, Tonya’s mother is and was as she says in the film “a monster.” That monster is played by Allison Janney who spews venom with every zinger the screenplay affords her. That level of abuse, however, continues into Harding’s adult life (Or a young adult. She is only in her early twenties after all), with her boyfriend and later on, husband, Jeff Gillooly, played with a quiet yet frightening presence by Sebastian Stan (Also a career best). And then finally, as stated before, the final stage of her life (Post incident) she has had to deal with abuse from the press, the public, and the history books. Craig Gillespie attempts to contextualize history with “I, Tonya” by presenting a series of contradictory testimonies told with flashbacks and voiceover and it all works to tremendous stylistic effect.

“I, Tonya” is a film about abuse and Gillespie uses all of the tools at his disposal to translate that feeling of getting pummeled as Tonya Harding is through life with his constantly moving camera, vigorous editing and take no prisoners soundtrack featuring various rock hits that keep the film’s energy and momentum up at all times. Relentless and effective, “I, Tonya” is a film that like the lead character herself, just wants to be loved. For some, it may be difficult but Robbie, Gillespie, Janney, Stan and everyone else associated with the movie eventually earns it through their sheer tenacity, talent and “fuck you” attitude. Special shout out to Paul Walter Hauser who may not be as recognizable a name within the cast, but is equally hilarious in his show-stealing scenes as the “criminal mastermind” behind the Nancy Kerrigan hit, with tons of CIA espionage experience (wink wink). With an insightful and non-judgmental look into the life of the lower American class whose dreams are all they have to hold on to, Craig Gillespie provides us with his best firested film yet, backed by a solid screenplay by Steven Rogers that never loses steam or its ability to make us laugh and/or gasp. The true story was fascinating in 1994 and now through the talents of those involved, the story can be fascinating once again, in this high-octane, frantic, darkly comedic and brutal look at the life of one of the most misunderstood figures in figure skating.​

The Next Best Picture Podcast · "I, Tonya"
Powered by JustWatch
Share
Facebook
Twitter
Copy URL
Previous article
The 2017 Sight & Sound List Of The Best Films Of The Year
Next article
Predict The 2017 Golden Globe/SAG Awards Contest