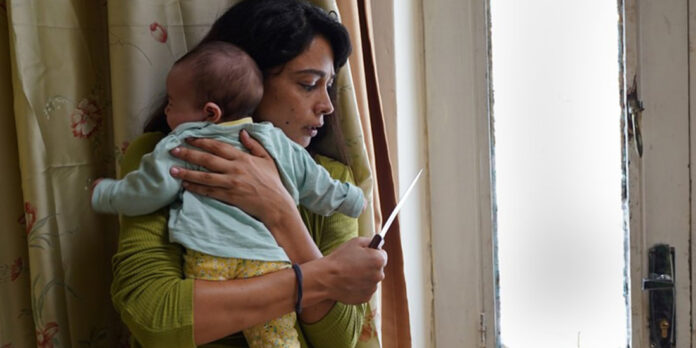 THE STORY – A young mother who is married to a jealous man goes to Huda’s salon in Bethlehem. However, this ordinary visit turns sour when Huda blackmails the mother to have her work for the secret service of the occupiers, thus betraying her people.
​
THE CAST – Maisa Abd Elhadi, Manal Awad, Samer Bisharat, Ali Suliman, Omar Abu Amer

​It’s a natural human desire to want easy conclusions, whether in real life or in the stories we consume. However, straightforward answers to complex problems are so rarely found in the world. While it may seem to go against an audience’s natural inclinations and desires, some of the most compelling films are those that live in and explore the uncertain valley between the start and finish of a dilemma. “Huda’s Salon,” the latest film from director-writer Hany Abu-Assad, dives headlong into this gray area by telling one small story situated in the middle of perhaps the most complicated and contentious struggle of the modern age: the Israeli-Palestinian conflict.

The film begins in the titular hair salon in Bethlehem, where we meet two women: Huda (Manal Awad), the salon’s owner, and Reem (Maisa Abd Elhadi), a local resident and the beauty parlor’s latest customer. But what starts out as a simple hair appointment quickly turns into something horrifying and sinister when one of the women betrays the other with an invasive, life-ruining act. The events of this one fateful day put the lives of both women in danger.

This opening scene is directed and performed with extreme specificity and attention, and it’s enough to make any audience member sit up and take notice. Shot in one long continuous take, it starts typical and expected with Huda and Reem making the kind of simple conversation usually found in a salon. However, things take a turn quickly and unceremoniously, effectively showing how lives can change through the misdeeds of others in a way that appears almost banal in their execution. And the impressive set pieces don’t end there; the film has several scenes that play out in long takes, with a good deal of impactful blocking and sudden bursts of energy simply occurring right in front of the characters – and thus the audience’s – eyes. These shocking twists that occur within scenes mirror the way that seismic world-changing events can often happen before those involved can even fully process what exactly is occurring.

Reem is tossed right into the heart of the conflict against her will and quickly finds that the way out of her situation is difficult, if not impossible, to find. And much like many international disputes, it’s tricky to pinpoint precisely the troubled beginning or foresee a potential end. She’s stuck in a kind of purgatory, where even those who could or should help her won’t do so without a price, monetarily or otherwise.

As the film’s central focus, Elhadi is assured in her presence while portraying, conversely, a woman who is uncertain in every regard as to her path forward through her dilemma. She constantly finds new levels of distress to play, never settling into a one-note frightened performance. And just when you think she can’t possibly appear anymore stressed or terrified, she continues to raise the bar by showing just how panicked a person in absolute peril can become. On the other hand, Awad is deliciously even-toned in her portrayal of the jaded salon owner. She’s clearly seen it all and is so blunted by the unlikely and undesirable direction her life has taken. Her focused lack of emotion only makes the brief moments where her tumultuous inner life pokes through her hardened exterior all the more surprising.

The tense, subtly inventive direction and top-of-the-line performances help to make “Huda’s Salon” a captivating, thrilling ride through rocky terrain. There is no easy solution to the situation at the film’s center and, almost certainly, nobody will come out of it better.