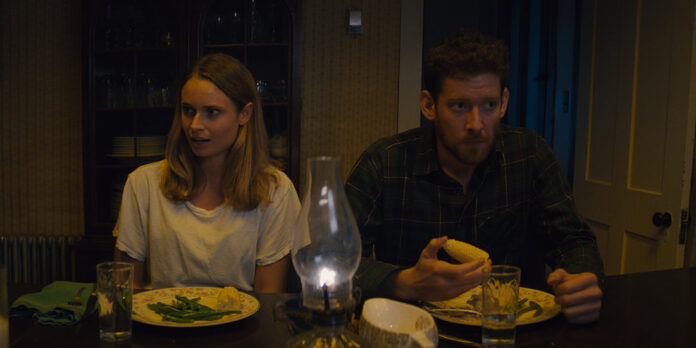 THE STORY – Strange cravings and hallucinations befall a young couple after seeking shelter in the home of an aging farmer and her peculiar son.
​
THE CAST – Sawyer Spielberg, Malin Barr, Barbara Kingsley, Stephen D’Ambrose & Jamie Bradley

​​​I’ve become used to the trends of modern horror that seek to rise above typical blockbuster fare. “Honeydew” fits right into the kinds of high-minded horror films that trade in jump scares and cheap thrills for an emphasis on a dread-filled atmosphere and unexpected turns. Unfortunately, once “Honeydew” departs from its tense, eerie first act, it becomes a parade of predictable plot points and depressingly nihilistic moments that don’t seem to indicate a substantive purpose.

Our main characters are Sam (Sawyer Spielberg) and Rylie (Malin Barr), a young couple on a research expedition to help Rylie pursue a doctorate in botany. After getting kicked out of their camping spot by the property’s mysterious owner, the pair makes their way to Karen’s home (Barbara Kingsley). She’s a local farmer who seems friendly enough if a little vacant. As Sam and Rylie settle in for the night, their surroundings go from somewhat strange to downright creepy.

This film is clearly indebted to the horror classic “The Texas Chain Saw Massacre” in many ways, most notably in the almost oblivious manner in which our main couple just enters a suspicious-looking house without question. And this film, just like the 70s original, has an affection for humanity’s nastier tendencies. There is an abundance of close-up shots of mouths chewing food and slurping down drinks, turning the every day into the grotesque. Add to that a general feeling of grime and despair, and it’s enough to want to go outside and take a walk rather than bathe in this film’s atmosphere. I would hope that the film’s writer-director, Devereux Milburn, would take that as a compliment. The film evokes such a feeling of unease and disgust that one has to admire the filmmaker’s dedication in creating an off-putting movie like this.

But while the film sets the table for its nauseating meal of a story very well, once the more apparent horror elements kick in and revelations are made, the film loses momentum. Once we get where we’re inevitably going, the story feels a bit deflated in just how hopeless and ultimately pointless the whole endeavor is. It doesn’t help matters that the audience never has any doubt about the peril in which the characters find themselves in. It’s not a bad thing for a film to not give its audience a semblance of hope, but “Honeydew” doesn’t seek to bring anything to its inevitable final act that isn’t somewhat expected for a movie like this. One element that does its best to elevate this dreary film is its score by John Mehrmann. It makes excellent use of vocalizations and vague mouth sounds, which perfectly ties into the film’s fascination with how humans consume food.

“Honeydew” is a nasty little movie that starts as an unnerving throwback to foundational horror filmmaking but ends up devolving into a bleak pile of nothing. I won’t be needing a take-home container at the end of this meal; I’ve had my fill.