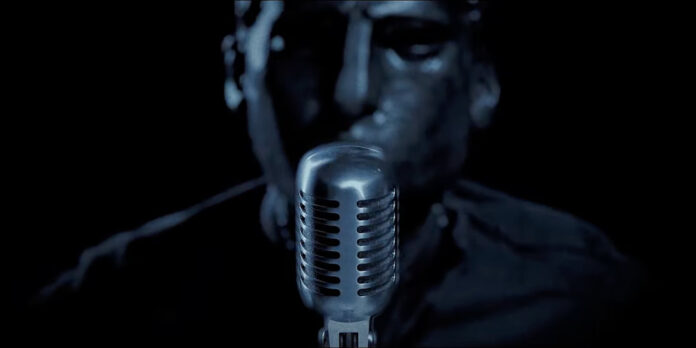 THE STORY – A couple’s ailing marriage gets put to the test when they are held hostage in an isolated vacation rental by an unseen voice that commands their every move and threatens harm if they don’t obey.

​​​​​​​​​​​There’s likely to be a surplus of ultra-low-budget, small-cast, one-location films being released throughout 2021-2022 as post-production finishes on movies conceived and filmed during the pandemic that swallowed most of 2020 whole. We may never know if such films were actually influenced by the pandemic at all. Still, when looking at something like Travis Cluff and Chris Lofing’s “Held,” it’s hard to imagine that it wasn’t. The film is mostly just two people in one house. A few other cast members mostly appear either in separate video footage or appropriately socially distanced from our central couple. The film’s set-up and execution are sometimes clever and often effective and make a strong case for how effective this directing team can be with little-to-no budget, but unfortunately, this relationship drama/thriller fails to give us compelling characters to care about, which is a necessity for what is essentially a two-hander.

The plot is simple and almost cliché: Emma and Henry Barrett (writer Jill Awbrey and Bart Johnson) are celebrating their anniversary with a weekend getaway at a remote house. It’s clear that there is some tension between them, but there is still love underneath it. After passing out from drinking some seemingly drugged alcohol, the couple realizes that a sinister someone has trapped them in the house and implanted a device near their ears which causes them great pain if they disobey the orders of the disembodied voice coming through the house’s speakers. A voice that says things like, “obedience is the root of all happiness,” and orders Henry to always hold the door open for Emma, after which she is ordered to thank him. And so, Emma and Henry are forced to play along until they can either survive or figure out how to stop the voice and escape. Secrets are revealed, and a nefarious plot is uncovered along the way.

All the elements are there to make a compelling thriller from this premise, and the directors (no strangers to ultra-low-budget horror after “The Gallows” and its sequel) do muscular work in building tension and creating some unsettling moments. It’s edited and shot very well, and even features some intense sound work; a scene where Emma prepares dinner while Henry reads some files curated for him by their captors on a laptop is emblematic of this – the sounds of Emma chopping vegetables slice through the scene and add intensity with each cut. However, the film’s screenplay leaves a lot to be desired, most notably characters we can care about.

This is Awbrey’s first feature-length screenplay, and she has clearly thought through the story’s premise and plot construction. A film like this depends on the slow parceling-out of information to gradually reveal the ultimate driving force of everything, and “Held” does this very well. The final reveal does indeed make everything odd or nonsensical that happened previously make more sense and gives more shape to the film’s themes. Unfortunately, the characters suffer for this, spending much of the first act as near-blank slates before the slow backstory reveal complicates them to the point that it’s hard to root for either of them. It’s easy to joke that by the end, you’re rooting for the disembodied voice to do away with both of them, but the voice sounds so much like a petulant teenager trying to force their unhappy parents back together that it’s hard to do that.

​The actors don’t rise to the occasion of filling in the blanks of the script, either. Awbrey plays Emma as a drip with a surprising lack of backbone, while Johnson comes across as a sentient slab of granite. The two aren’t given much to do in the first act, partly because critical things about them and their relationship need to remain hidden because of plot mechanics. This makes sense, but with Awbrey and Johnson doing so little to make either character engaging, there’s very little for the audience to grab on to. We want to see them escape because they’re the protagonists, but the film is too beholden to genre conventions to play out any other way than the way it does, so we rarely ever worry about the characters.

This protagonist problem ends up dooming the film. While it moves at a good pace, it wears out its welcome surprisingly quickly without characters to care about. The final reveal is well-done enough to recapture that interest, but the film is too far gone by that point. All of the credit must be paid to Cluff and Lofing, who make the most of what they have at their disposal. They make “Held” stylish and slick enough that the film looks far more expensive than it is, which can’t have been easy. But until they get better with actors, their films will, unfortunately, remain interesting coulda-beens.