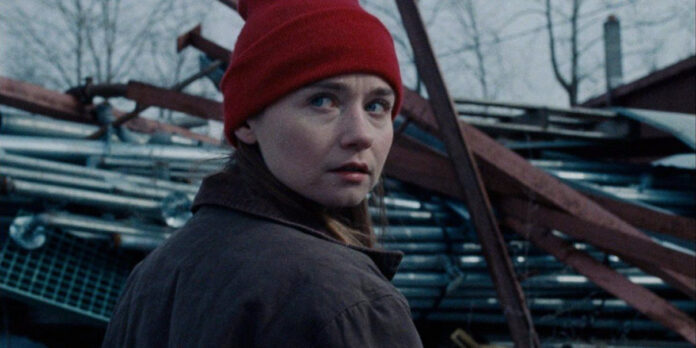 THE STORY – Hoping to pay for college, a determined young woman lands a dangerous job working in a scrap metal yard during a brutal winter. With her goal in sight, she soon finds herself torn between a promising future and the family she would leave behind.

​​There’s something about how the grey, cold, sleepiness of Jackson, Ohio, looks in “Holler” that affects audiences. You can feel the harsh winter on your skin, feel the economic impacts of factories and businesses shutting down, and the exhaustion on people’s faces has a way of taking over you. It seems as if the town is reaching for you, hoping to never let you out of its grips, but Ruth Avery (Jessica Barden) knows it’s time for her to leave.

The high schooler, almost ready to graduate, has the potential to excel in college, but there’s no way she could afford it – any time she comes home, there’s a new eviction notice on the door, bills aren’t paid, and she has to rely on discarded dinners from the local frozen food factory for food. Many people don’t support the idea of her leaving, including her mother (Pamela Adlon), who’s in county jail for drug addiction. She claims they’re not college people. Her older brother Blaze (Gus Halper), though, goes ahead and completes her college application without her knowing, and lo and behold, the coveted acceptance letter comes in the mail.

The only way to pay for her education is for Ruth and Blaze to join a scrap metal crew led by Hank (Austin Amelio) that doesn’t do things by the books. The group steals scrap metal from factories around town at night and sells it to a junkyard. As the film goes on, money doesn’t become the only problem Ruth has to face – going to college means leaving her brother behind, and she’s not sure if it’s worth it.

What Nicole Riegel’s film does very well is throw you into this reality and make you understand what the characters are feeling. And she doesn’t sugarcoat feelings of dread or of being trapped, either. College isn’t a possibility for a lot of people. Money, lack of support, and being a first-generation student can all impact someone’s chances of going to school, and they’re all factors in Ruth’s life. But looking around her, seeing people lose their jobs, or resorting to illegal activities, she knows she can achieve a lot more if she goes away. Although she has the will to do it, her love and dedication to her brother stop her from entirely going all in. They’re always together and looking out for each other. Ruth doesn’t like Blaze’s girlfriend, while Blaze is always protective of his little sister. At the end of the day, they’re all they’ve got. These constant plays of inner conflict help you understand what Ruth’s grappling with, which a lot of movies don’t present. But through all of these tough moments, we also see her let loose and shine her extraordinary smile, which again paints a real image of this character. Ruth is a character many of us can relate to, and Barden does a great job of bringing her to life. The score by Gene Back also beautifully complements scenes and expresses so many emotions. Moments of hope, longing, and revenge are all captured brilliantly, thanks to a stunning string section.

The film does start to lose a bit of energy as it goes on. Once Ruth and Blaze join the crew, things begin to feel monotonous: collect metal, fight here and there, weird dynamic forms between the group, repeat. There’s a lot of drama in what they’re doing – it’s illegal, after all – but no one seems to care, not even Ruth, whose entire future depends on this job going smoothly. Even moments visiting her mother in jail all feel the same. But maybe it’s all intentional. Perhaps the effect of small-town Jackson, Ohio, has made a lot of these characters numb to what’s going on in their lives.

“Holler” has a lot of immersive storytelling elements in it, but there are times when the script could have used a little bit more excitement to keep the story going. But as far as giving us a glimpse into real life and all the good and bad parts of it, Riegel’s film pulls us in and makes us feel what her characters are experiencing.