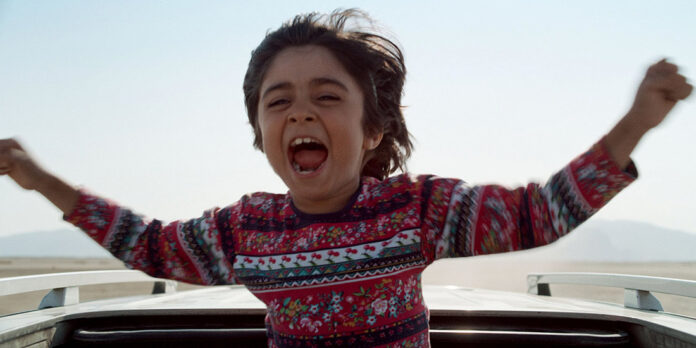 THE STORY – A chaotic family is on a road trip across a rugged landscape. In the back seat, Dad has a broken leg, Mom tries to laugh when she’s not holding back tears, and the youngest keeps exploding into car karaoke. Only the older brother is quiet.

Films about dysfunctional families are nothing new – “The Royal Tenenbaums,” “August: Osage County,” and so on – and neither are road trip comedies – “Vacation” and “Planes, Trains & Automobiles.” We’ve even had comedies about dysfunctional families on road trips (“Little Miss Sunshine,” anyone?). So, when surveying the synopsis for Panah Panahi’s “Hit the Road,” it’s easy to see why one might think his take on this subgenre-of-sorts is a bit of a “been there, done that” situation.

However, in his directorial debut, Panahi – son of famed filmmaker Jafar Panahi, best known for “The White Balloon” and “Taxi” – sets his story apart by focusing far less on the destination of this road trip (which is never revealed) and far more on the journey and the characters at the core of this chaotic escapade. Characters who, like Panahi himself, are Iranian, additionally providing audiences with a compelling new cultural perspective on the tropes present in these films and showcasing the similarities and differences in American and Iranian family dynamics. And though the movie itself may sometimes prove to be a bit too elusive for its own good, the commendable cast – and Panahi’s witty, winsome writing – make it a mightily rewarding watch.

We first meet our family in their (borrowed) car on the side of the road, taking a pit stop before setting off to continue their cross-country crusade. Though we know no one’s names, their roles are clearly defined from the start. At the front, there’s the mother (Pantea Panahiha), keeping her cool thanks to her sunny disposition but shouldering some sort of sorrow, with signs of this internal suffering showing on her face in fleeting moments. The driver she’s seated next to is her oldest son (Amin Simiar), the quietest of this otherwise bawdy bunch and the reason for their recent travels, though exactly where he’s headed isn’t ever disclosed. The patriarch (Hasan Majuni) is perched in the back, his injured leg sitting in a cast between the two front seats, while the riotous younger son (Rayan Sarlak) is almost impossible to reign in, keeping the troupe on their toes as they embark into the unknown. Simultaneously, they confront their conflicted emotions about leaving home and trying to maintain a light mood despite the mayhem around them.

For the first half of the film, “Hit the Road” is able to get by almost solely on the raucous repartee between these colorful characters, with Panahi so skillfully sketching out their personalities and making each member of the family instantly recognizable and relatable. The dialogue he writes is likewise delightfully diverting, alternating between playful pop culture references to “Batman Begins” and “2001: A Space Odyssey” to deeper discussions about the family’s fears and faults that are never addressed directly, but instead via muted means, with their truest feelings camouflaged simply to assure the continuation of a “comforting” aura. It’s stunning to see just how much Panahi – and his protagonists – can say without actually speaking their honesty aloud, but that’s a testament to how terrifically layered these lines are; not only do they hold our attention as most of the family’s “adventure” takes place in/around a car or at various pit stops, but they’re also rich in emotional resonance that subtly reveals itself the moment the audience decides to look a little closer. Seemingly innocuous statements can make the world shake.

“Hit the Road” slightly loses its way in the second act, becoming a bit more meandering and arriving at a rather abrupt resolution. Even though it runs for a relatively swift 93 minutes, this is the rare movie that might have benefitted from more time to reach a more fitting finale. Still, the one thing that is consistent throughout the entire film is the authentic acting from the excellent ensemble cast assembled here, with Panahiha and the young Sarlak serving as standouts. Panahiha has to handle most of the hardest emotional beats. Still, she does so with such stark honesty, free of any artificial artifice, and, at a moment’s notice, she’s able to switch from this sadness to spirited levity, doing her best to conceal her genuine concern about her oldest son’s upcoming “migration.” On the opposite end of the dramatic spectrum is the spunky Sarlak, suffusing the film with some much-needed sass and soulfulness to continually remind his family of what really matters most at the end of the day – the fact that they’re all together in this moment, no matter how mad things get later on. Simiar is also quite affecting as the family’s stoic older son – unable to entirely give in to his anguish at risk of ruining his family’s remaining tranquility – while Majuni primarily acts as a playful scene partner for Sarlak, reining in his wacky whims, but he too gets a beat of pensive poignancy near the effective ending, sharing in his wife’s suffering after previously playing it cool.

Honestly, it’s the characters who make this movie and draw us into their daring drive, as the loose structure can sometimes challenge audience engagement. But Panahi knows where to direct our attention, and when he puts his central focus on the core family, the story sings. “Hit the Road” may not answer all our questions by the end or serve as a fully complete story, but it’s a tremendously entertaining and engrossing time and a fantastic debut as a writer-director for Panah Panahi.