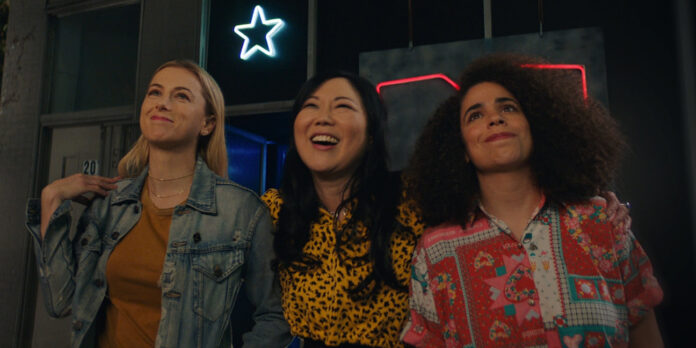 THE STORY – After years of putting her career ahead of love, stand-up comic Andrea Singer stumbles upon the perfect guy. On paper, Dennis checks all the boxes, but Andrea’s friend, Margot, is convinced he’s not all he appears to be.

​While Iliza Shlesinger has headlined several successful Netflix comedy specials and taken on quite a few sidesplitting supporting parts in films like “Instant Family” and “Spenser Confidential” over the past few years, the comedienne has yet to find a breakout role that will finally make her a known name amongst mainstream audiences. Case in point, Kristen Wiig and Melissa McCarthy got their big break with “Bridesmaids,” Amy Schumer struck gold with “Trainwreck,” Tiffany Haddish took off after “Girls Trip,” and so on. However, Shlesinger set out to change that narrative all on her own, scripting a riotous romcom – primarily based on a personal love story (of sorts) that seemed too crazy to be true – and teaming up with Universal Pictures, who were set to distribute her feature film screenwriting debut. Unfortunately, when the pandemic hit, plans changed slightly, and “Good on Paper” now finds itself premiering on streaming, courtesy of Netflix. Regardless, don’t let this change in distribution models make you question the quality of Shlesinger’s stellar comedy, as it’s sure to be one of the funniest films you’ll see all summer long.

“Good on Paper” opens at a stand-up comedy show anchored by Andrea (Shlesinger), who is killing it with the crowd as usual but still can’t seem to get the rest of her life in order, especially when competing for roles in film and television against the likes of the self-involved (and uber-successful) Serena (Rebecca Rittenhouse). Because Andrea is almost always concentrated on advancing her career, she leaves little time for “love,” hoping that one-night-stands can scratch that itch in the meantime. That is until she meets Dennis (Ryan Hansen), a hedge fund manager and Yale graduate with a put-together life, pockets of money, and the perfect answer for everything. It doesn’t take long for Andrea to be swept off her feet, falling quickly for Dennis’s charm and the control he brings to her chaotic world. Sadly, it doesn’t look like this lovefest is meant to last, as Andrea’s best friend Margot (Margaret Cho) starts to catch on to several inconsistencies in the stories Dennis spins up. Andrea subsequently begins to pay attention to the more suspicious parts of his past as well. Is her dream man a plain-old phony? And if so, what does he want with her?

First and foremost, “Good on Paper” stands out from today’s crop of female-led studio comedies thanks to the unfiltered voice and perspective of its leading lady, Iliza Shlesinger. Much Kristin Wiig’s work on the aforementioned “Bridesmaids” or Amy Schumer’s script for “Trainwreck,” these films are exponentially more entertaining when the comedienne at the center is given free rein to shape the story (and its humor) as she sees fit, with the project soon becoming indistinguishable from the star’s personality. Knowing that stand-up has been her strength in her career so far, Shlesinger smartly structures “Good on Paper” as if it were another routine of hers, intermittently interjecting raucous recaps of the events taking place in the film throughout her troubles with Dennis. This style contributes significantly to the story’s ability to set itself apart from the pack while also providing Shlesinger with another opportunity to showcase her comedic skill set. Her self-deprecating digs at her relational struggles are wondrously witty, and they help “Good on Paper” feel like a more personal piece as opposed to another dull streaming diversion.

The rest of Shlesinger’s script is equally sharp, as she peppers almost every one of Andrea’s personal interactions with distinctively hysterical dialogue and rarely takes the easy route to deliver a joke we’ve heard a million times before. Her back-and-forth with Cho’s Margaret – especially after they team up to take this trickster down – is blisteringly brilliant and always amusing. While Shlesinger’s observations on the state of modern dating are nothing new per se, she packages them in such a humorous way that we can’t help but be captivated by the conversations she’s starting. The film does take one too many twists and turns in its third act, resulting in a finale that feels a bit out of place with the more plausible story beats present in the first two thirds, but this thankfully doesn’t tank “Good on Paper” as a whole, as Shlesinger manages to wrap up the movie in a fitting manner and remind you of what you enjoyed before the story took on more “sillier” satire.

Across the board, the cast of “Good on Paper” is entirely commendable, with each actor playing their part with convincing comedic credibility and commitment. Shlesinger proves that she can indeed carry a film on her own with a priceless lead performance that promotes her talents as well as any one of her comedy specials. It’s a shame she won’t receive as much attention on streaming as she would’ve otherwise, as this is the kind of role that genuinely takes a comedienne’s career to new heights. Cho is as engaging as ever, elevating a stereotypical best friend/”sidekick” part with her personal brand of humor, while Rittenhouse is real fun as Andrea’s main foil in the industry, contextualizing the character in unexpected ways. Finally, after being saddled with subpar material in films like “Fantasy Island” or “Like a Boss” last year, Ryan Hansen is able to redeem himself here, expertly eschewing the audience’s expectations left and right as the deceitful Dennis and jugging his jokes just as effortlessly.

“Good on Paper” may have a standard set-up, but writer-star Iliza Shlesinger quickly reinvigorates this regular romcom plot with her signature style and comedy savvy. Thanks to a stellar script and a capable cast, “Good on Paper” is far better than the basic “bargain bin” comedic content we see from streamers nowadays, and Shleslinger’s work is well worth a watch for any moviegoer looking for a lively mid-summer laugh riot.