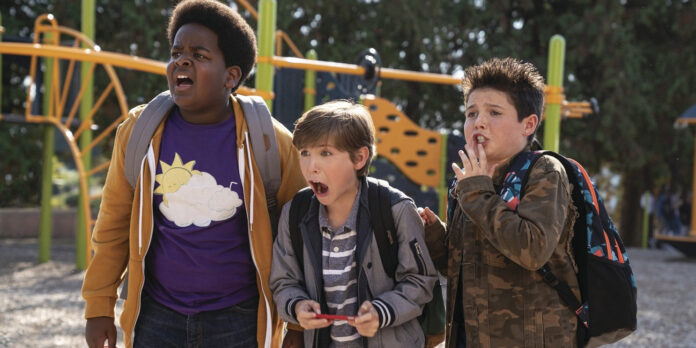 THE STORY – Invited to his first kissing party, 12-year-old Max asks his best friends Lucas and Thor for some much-needed help on how to pucker up. When they hit a dead end, Max decides to use his father’s drone to spy on the teenage girls next door. When the boys lose the drone, they skip school and hatch a plan to retrieve it before Max’s dad can figure out what happened.
​
THE CAST – Jacob Tremblay, Keith L. Williams, Brady Noon, Molly Gordon, Lil Rel Howery, Will Forte & Midori Francis

Straddling a fine line between taste and distastefulness can be extraordinarily tough, especially in the world of comedy. Many of the funniest films nowadays (especially from the minds of Seth Rogen and Evan Goldberg) are sprinkled with outrageous laughs throughout. Sometimes the jokes are clever and sometimes they’re crude as they try to tell a story about friendship, with enough genuine moments of tenderness and heartbreak, so that the audience feels the debaucherous journey was worth it. We’ve seen this formula displayed in “Superbad,” “The Hangover,” “Pineapple Express” and countless others. Now, imagine if you took these adults characters and you replaced them with sixth graders. That is how you get “Good Boys.”

Max (Jacob Tremblay) is a 12-year-old kid who is going through some changes. He is starting to become curious about women and his friendship with Thor (Brady Noon) and Lucas (Keith L. Williams) is also evolving as he gets invited to his first kissing party, while his friends do not. Wanting to impress the girl of his dreams, Brixley (Millie Davis), he decides to use his dad’s (Will Forte, is a brief but hysterical role) drone to spy on the girls next door, so he can learn how to kiss in time for the party. Max loses the drone but comes into possession of the girls’ drugs (molly). Not wanting to disappoint his father, Max is determined to get the drone back, but things become complicated as the adventure takes him and his friends across highways, into college fraternity houses and beyond.

“Good Boys” has a lot of similar tropes that we’ve seen before. The characters are trying to get to a party. They have to go on an epic journey along the way, filled with bizarre shenanigans, setpieces, and hysterical reoccurring gags. There are laughs had, lessons learned and through it all, the characters grow from where they started at the beginning of the film. “Good Boys” packs its film with the usual ingredients for a raunchy R-rated comedy: humor, drugs, sex, and booze. However, they aren’t necessarily partaking in drug or sexual activities. Instead, they are repulsed by it and condemning it for others. These are still kids at the end of the day and part of the fun with “Good Boys” is witnessing their reactions to all of the usual tropes in the genre we take for granted. Often screaming, sometimes crying, these are good kids at heart, trying to act tough for the older people around them, and still finding their way in the world. It produces some genuine honesty in their performances as experiences are shared,  truths are revealed and growth is had with some well-earned emotion by the end.

Obviously, we’ve never seen Jacob Tremblay like this before. He might still be that cute kid from “Room” and “The Book Of Henry,” but here he is foul-mouthed and put into situations that will surely make your jaw drop. He is perfectly complemented by his newcomer co-stars Brady Noon and Keith L. Williams, each who have their own unique traits they bring to the movie to create highly funny exchanges between the three. Lucas is exceedingly tall for his age and loves the card playing game Ascension, while Thor is a good singer who wants a part in the school’s production of “Rock of Ages.” However, just as Max is going through changes, his friends are as well. Lucas’ parents are in the middle of a divorce while Thor is constantly being bullied by the kids at school for not drinking more than three sips of a bottle of beer. Each is going through their own journeys but together, they formulate a terrific team and I would not be surprised to see a sequel from in the not too distant future with them. They’re that fun, relatable, cute and irresistible.

Just when you think the gimmick of “Good Boys” is starting to wear thin, or the jokes are beginning to get stale, the actors pull us back in with their camaraderie and genuine honesty towards one another. They provide an emotional reminder that the friends we had when we were young were the ones worth holding on to as we got older. The story of “Good Boys” may only span a short period of time and a small distance (literally, only 4 miles), but the journey feels every bit as epic as the year’s biggest blockbuster because, through the eyes of a child, that’s exactly what it is…just with more molly, sex toys, CPR dolls and sex jokes.