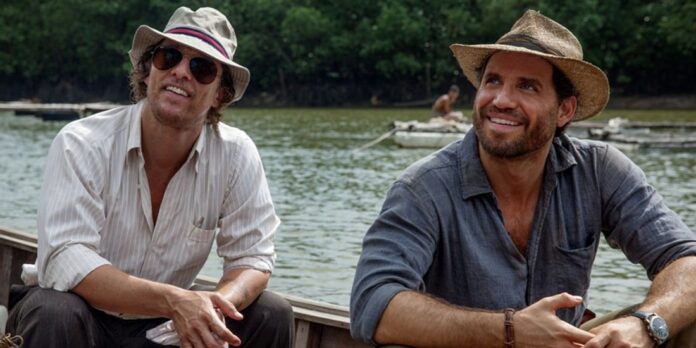 THE STORY – Kenny Wells, a prospector desperate for a lucky break, teams up with a similarly eager geologist and sets off on an amazing journey to find gold in the uncharted jungle of Indonesia. Getting the gold was hard but keeping it is even more difficult, sparking an adventure through the most powerful boardrooms of Wall Street.

If you think “Gold” is suffering from unfair comparisons to “The Wolf Of Wall Street” due to its marketing campaign and trailer, well think again because those criticisms are completely justified. The film’s subject matter is very similar in a lot of ways. It follows a driven businessman who hits the big time and the inevitable fall which happens after is all completely based on an unbelievably true story. However, director Stephen Gaghan (“Syriana”) does not know how to bring the same level of energy, wit, and excitement to the story, resulting in a movie that is completely hollow and only saved by Matthew McConaughey’s committed performance.

Loosely based on a true story which took place during the late 80’s and early 90’s, Kenny Wells (Matthew McConaughey) is an unlucky prospector who is the son of a well-respected miner. He is driven to succeed but is having trouble getting backers to find his expeditions in search of gold. His only support is his girlfriend Kay (Bryce Dallas Howard) and a geologist named Mike (Edgar Ramirez). Mike and Kenny set out to Indonesia, deep within the jungle through the skin of their teeth to set up a mining field and after months of waiting, eventually find themselves sitting upon one of the biggest gold findings in history. Looking to live life to the fullest, Kenny, Kay, Mike and their new business partners all look to cash out and profit in a big way when suddenly the findings turn out to be significantly a lot less than what they hoped for.

I feel quite bad for Matthew McConaughey. Here, he put on a substantial amount of weight and is sporting a terrible haircut much like Christian Bale did for “American Hustle” which is another film that “Gold” is trying to be in many ways. No matter how hard McConaughey tries (And believe me, he truly does try) he cannot rescue “Gold” from being a total misfire. The film is played way too seriously when it should be fast and loose with the material allowing for more moments of humor and possibly improvisation to lighten up the proceedings. Instead, we get a story about greed and betrayal which McConaughey is able to sell effectively but Gaghan’s hold on the material is never as secure as it should be for a story and a character this rich (literally and figuratively). You could even tell from the film’s shaky opening that “Gold” was not going to flow well in terms of its editing and even though it does pick up a bit as it goes along, it never quite finds its footing.

Edgard Ramirez does a competent job as Kenny’s partner, Mike. However, it does feel like he is sleepwalking through the role at times while other supporting characters (Which there are many) such as Bryce Dallas Howard, Bruce Greenwood, Corey Stoll, Toby Kebbell and others all turn in the same competent performances that scream “We wish this were a better movie.” Stephen Gaghan has not directed a film since 2005 and his rustiness shows here in a big way not allowing us to take anything away from this story where it would have worked just fine as a documentary. We would not have gotten McConaughey’s fun performance, but in a few weeks, no one will probably care anyway.

At one point in the film, Kenny Wells is referred to as “Fool’s Gold” which non-coincidentally shares the same name as a notorious romantic comedy film that Matthew McConaughey starred in during his less acclaimed time within the industry. While “Gold” is not as terrible as that film, it’s quite close. The difference is McConaughey who holds our attention throughout the film’s two hour running time, which manages to feel almost like two and a half hours due to the film’s poor pacing and non-crackling screenplay. All of the ingredients were there to turn “Gold” into gold but much like the story itself, what we end up with is a fraud.

The Next Best Picture Podcast · "Gold"