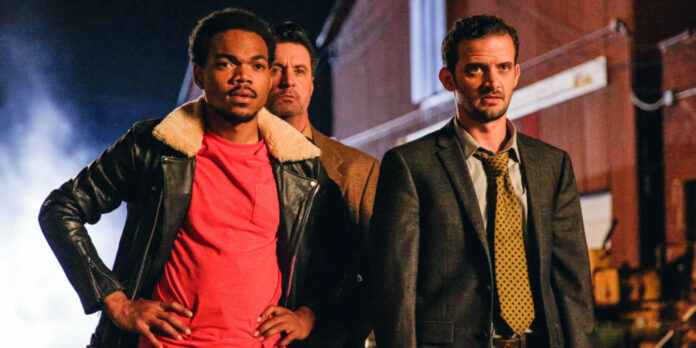 THE STORY – When a pizza delivery driver is murdered on the job, the city searches for someone to blame: ghosts? drug dealers? a disgraced werewolf?

​”Slice” is a fun homage to the straight to video horror films that were incredibly popular during the 1980’s and 1990’s. The film does not take itself too seriously and has an attitude and a style dedicated to the time period it is clearly obsessed with. While on the surface it may seem to just be another ridiculous comedy-horror film, it does handle its homage with a ton of respect. From the visual style to the retro soundtrack, costumes, and production design, “Slice” is oozing with inspiration and dedication. “Slice” is meant to be taken as pure enjoyment, a drive-in style comedy-horror film that you would have watched on a Friday night will all your friends while scrounging down some candy, some pizza, and two-liters of cola.

In the town of Kingfisher where ghosts and werewolves are apart of everyday life, trouble is afoot. After delivering a pizza to Ghost Town, the subsection of Kingfisher where the ghosts live, a pizza boy by the name of Sean (Austin Vesely) is murdered. An investigation into his murder is launched by the police, an investigative journalist named Sadie (Rae Gray), and Sean’s girlfriend, Astrid (Zazie Beetz). The most obvious suspect is a former Chinese food delivery man, Dax (Chance the Rapper) who the townsfolk claim is a werewolf. But things aren’t as they seem in the mysterious town of Kingfisher. The town is desperately trying to figure out who is behind the murder of Sean as well as other pizza delivery workers before the body count gets too high.

“Slice” is the directorial debut from Austin Vesely, who directed the Sunday Candy and Angels music videos for Chance the Rapper, who also stars in this film. Vesely does a good job for his first directing gig. Not only does he handle the technical side of his project with nuance and care but he directs the ensemble to some pretty good performances. The comedic timing of the dialogue and how the actors play off one another has the appearance of a seasoned comedic director. The ensemble might be the best part of the film as they all get their own particular moments where they are allowed to shine.

“Slice” really digs deep when it comes to honoring everything that has come before it. Taking on certain tropes in full stride and wearing these elements as a badge of honor, there is still a tendency to make fun of these tropes. There is a form of passion that can be seen in every violent murder and line of dialogue. While the film is more comedic than horrific at times, it still relishes in these aspects of filmmaking. The creepy basement, the use of unlikely people having to step up and save their town, it re-creates the popular plot devices that were seen countless times during the films that inspired this one.

While this film is funny, light-hearted, and ridiculously entertaining, it definitely will not be some people’s cup of tea. It’s rather straightforward, incredibly simple, and is not a necessarily what one would consider “challenging viewing.” It plays its card close to its chest and sticks to what it does best. It doesn’t attempt to break new ground or even re-define the genre it finds itself in. For some, this will simply not hit them the right way, but for others, this will be right up their alley. It will be a perfect nostalgia trip that will have them laughing and of course, craving some delicious pizza.

“Slice” is a simple film and another solid release from studio A24. Complementing and honoring the style of the comedy horror films that came before it, “Slice” is an inspired film that hits a certain sweet spot for horror fans. Though there is nothing to really dig from it besides what is presented, it still is a hell of a good time and insanely enjoyable. Austin Vesely does a stellar job with his directorial debut and I hope to see him continue to work within the feature film format.