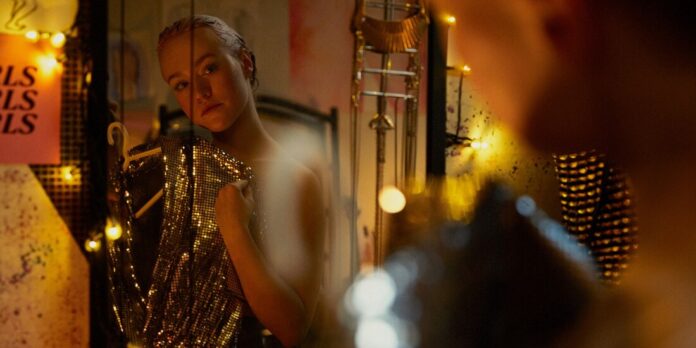 THE STORY – Best friends Mimmi and Rönkkö work after school at a food court smoothie kiosk, frankly swapping stories of their frustrations and expectations regarding love and sex. Volatile misfit Mimmi, unexpectedly swept up in the thrill of a new romance with Emma (a driven skater training for the European championships), struggles to adjust to the trust and compromise required by a lasting relationship. Meanwhile, the offbeat, indefatigable Rönkkö hits the teen party scene, stumbling through a series of awkward encounters with members of the opposite sex while hoping to find her own version of satisfaction.

​​​At first, it may be hard to connect with leading characters Mimmi (Aamu Milonoff) and Rönkkö (Eleonoora Kauhanen) in Alli Haapasalo’s “Girl Picture.” With the opening scenes portraying the two characters in a negative light by hitting a fellow student with a hockey stick and being rude to their other classmates during shifts at work, you may be wondering why the film would focus on these two as the protagonists of the story. However, it is down to Daniela Hakulinen and Ilona Ahti’s screenplay that these two characters develop throughout the 100-minute runtime and create a narrative that not only feels authentic but that the audience can relate to.

“Girl Picture” weaves through two main stories, both of which deal with the themes of discovering sexuality and identity. These themes are explored through the perspective of both Mimmi and Rönkkö as they have different experiences but have many of the same issues to grapple with. For example, Mimmi finds herself swept up in a relationship with Emma (Linnea Leino), a figure skater in the process of training for the European championships. This storyline sees Mimmi and Emma both discover what is most important to them and what sacrifices they must make to keep the relationship going. The use of contrast from Haapasalo’s direction, cutting between intense and dark scenes within a nightclub to the white and sterile ice rank scenes, creates a stark difference between the two settings, showing the different sides to Mimmi and Emma’s relationship.

Mimmi and Emma’s storyline is linear and focused, only having a few select characters and locations in which their story is told and focusing on their developing relationship. In contrast, Rönkkö’s storyline sees her trying to find her sexuality by hopping from party to party and experiencing numerous awkward situations in the process. The audience can place themselves in Rönkkö’s shoes as she attempts to find a man who can give her pleasure, and this narrative is one that many people may find either empowering or relatable by the end of the film. It is also Rönkkö who takes over the leading friendship in the final act of the film and is a guiding light for Mimmi when she is struggling to commit to a long-term relationship. Hakulinen and Ahti manage to focus the screenplay on the strengths of the first half and continually develop this beautiful friendship that Mimmi and Rönkkö have.

“Girl Picture” takes a while to get going and to connect with the characters but tells a beautiful story once the main characters have been established. The film is small and intimate, giving the audience a look into every major and minor juncture these characters experience on their journeys. With the passion that oozes out of the actors’ performances and is captured on screen, a youthful energy runs from the personalities of the three leads and comes through from start to finish. With a runtime of less than two hours long, you will somehow already feel like you’ve known these characters for years and yet still want to continue this journey with them.