First Reactions To “The Favourite” & “Roma” From The Venice Film Festival 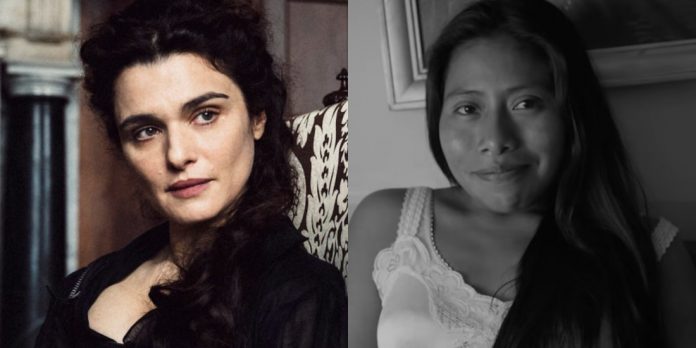 Another day at Venice and the anticipated Oscar contenders keep coming through. After yesterday’s world premiere of Damien Chazelle’s “First Man,” audiences were treated to the new Yorgos Lanthimos film “The Favourite” and the black and white historical drama from Academy Award winning director Alfonso Cuarón titled “Roma.”

How did everyone react to their world premieres at Venice?

The answer is enthusiastically!

John Bleasdale from CineVue writes about the ladies from “The Favourite”…

“The three female leads likewise jockey for our affections, as Emma Stone – as she did in La La Land – first fake cries her way into our hearts before revealing herself to be made of flintier metal. Weisz gives her Lady Sarah an inverted trajectory of the high brought low, and perhaps finding a heart in the process. While Olivia Colman is simply stupendous as the Queen of unhappiness, who is at once comic grotesque, puking, lecherous and mad, but also a desperately lonely woman surrounded by lackeys and rabbits. The reason she has the latter is in itself heartbreaking.”

“Olivia Colman’s queen is a really funny creation – perhaps funnier and more sympathetic than her Queen Elizabeth II is going to be for Netflix, but who knows how she will reinvent that role? Her Anne is like something between the QEI that Quentin Crisp created in Sally Potter’s Orlando and a weird blend of Nursey and QEI in Blackadder. But that doesn’t do justice to the sadness of her Queen Anne: someone who has been infantilised by a lifetime of emotional manipulation. She is transported everywhere by wheelchair or sedan chair but can walk just as well. She sometimes flies into something between an anxiety attack and a rage at the sound of music or the spectacle of people enjoying themselves because of a self-hating inability to participate in pleasure. There is a private tragedy in her life which means that her emotional energies have been displaced into her large menagerie of house rabbits and she shows a keen interest in racing ducks and lobsters. Again: in the hands of an actor who wasn’t funny this could have been awful, but Colman sells all of it.”

“Lanthimos’ career trajectory up to this point has been genuinely remarkable, going from Greek Weird Wave standard-bearer with his breakout “Dogtooth” to Best Original Screenplay nominee within the span of a few short years. Crucially, this wider exposure hasn’t come at the cost of his unique sensibility: The mainstream has come to Lanthimos, not the other way around. His comedy remains pitch black, his characters still speak of grave matters in monotone, and sudden outbursts of violence are never far away.
​
“The Killing of a Sacred Deer” was something of a lateral move after “The Lobster,” exhibiting a familiar deadpan absurdity in its dialogue even as Lanthimos and frequent collaborator Efthimis Filippou wrote themselves into a corner they never fully managed to work their way out of. Though its stunning, candlelit interiors and setting invite comparisons to “Barry Lyndon,” “The Favourite” is more akin to a film like “Jackie Brown” for the way it represents both an expansion of and slight departure from its director’s established sensibility. Notably, it’s also the first film that he didn’t have a hand in writing: Deborah Davis and Tony McNamara are responsible for the script, which feels so in keeping with Lanthimos’ style that it must have been written with him in mind or refined by the filmmaker as he brought it to screen.”

Moving on to Alfonso Cuarón’s “Roma,” the reactions are so positive that it’s looking likely that not only can Netflix have their first Oscar nominated film for Best Picture this year…but possibly even their first win!

“Going out to the movies figures majorly in “Roma.” At one point, we’re startled to see a Mexican outer-space film, with primitive special effects and two floating astronauts in conversation, that looks like it could have been a study for “Gravity,” the 2013 sci-fi landmark that was Cuarón’s last film before this one. “Roma” is the sort of movie an ambitious director summons the power to make after a smash hit like “Gravity”: searingly personal, without movie stars, more “Amarcord” than space opera. Yet “Roma” too, in a different way, carries shades of a God’s-eye view. On some level, Cuarón, in “Roma,” floats above the action he’s showing us. He’s become the filmmaker as neorealist deity.”

“Thanks to Cuarón’s own remarkable 65mm cinematography, it feels as if the filmmaker is writing his memoirs with moving images, yielding a hypnotic effect closer in style to the muted aesthetic of Argentine auteur Lucrecia Martel, or Chantal Akerman’s “Jeanne Dielman.” Cuarón’s “Roma” is by far the most experimental storytelling in a career filled with audacious (and frequently excessive) gimmicks. Here, he tables the showiness of “Children of Men” and “Gravity” in favor of ongoing restraint, creating a fresh kind of intimacy. Like a grand showman working overtime to tone things down, he lures viewers into an apparently straightforward scene, only to catch them off guard with new information.”

Todd McCarthy from The Hollywood Reporter writes more about Cuarón stepping in as cinematographer over longtime collaborator Emmanuel Lubezki….

“It becomes clear soon enough that Cuaron’s stance here is that of a poetic curator of memories. The shimmering, silvery monochromatic images summon up moments and experiences with crystalline vividness. Taking over as cinematographer himself and working without the incomparable DP Emmanuel Lubezki for only the second time in his career, the director here relies upon the use of slow lateral pans to move from one event to another. This creates the opposite effect of quick cutaways and reaction shots, producing instead a feeling of the continuity of life, an indication of one experience or encounter leading to another, of everything being related, an establishment of certain events that will ultimately lead to a repository of permanent memories as opposed to evanescent ones.”

This is all very positive to hear and bodes well for both filmmaker’s chances with the Oscars this year in multiple categories. “Roma” will stop next at the Telluride Film Festival this weekend, while “The Favourite” will be coming to the Toronto International Film Festival next week. We expect the reaction to be just as rapturous as it was today. These are certainly exciting days and there are more to come!