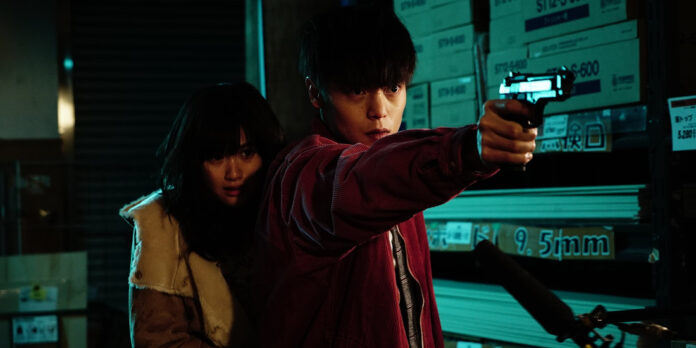 ​​​​Jean-Luc Goddard famously once said that all you need for a movie is a gun and a girl. For prolific Japanese auteur Takashi Miike’s latest film, he’s taken that maxim and added, in his typical maximalist fashion, a boxer, a corrupt cop, a yakuza, some Chinese gang members and hitmen, some VERY well-made cars, and a whole case full of drugs. And of course, he’s decided to call it “First Love.”

Miike has generally been one to go for the wild and crazy when the normal would do, and that has usually served him well. “First Love” walks that line much more cautiously than most of his previous work, resulting in a film that somehow doesn’t feel as crazy as it should, despite moments of complete batshit insanity. The story is completely straightforward: Leo is an up-and-coming boxer who has just found out that he most likely has a brain condition that could end his life very soon. Monica is a drug addict who is basically being held hostage as a prostitute to pay off her father’s debts to some drug dealers. A local yakuza has decided to use Monica as a pawn in his plan to steal a big drug shipment, with the aid of a corrupt cup. Only Monica, desperate for drugs herself, makes a break for it and runs past Leo, who helps her by punching her pursuer in the face. They run off together and attempt to extricate themselves from the situation as best they can be pursued by the drug dealers, the yakuza, the cop, and some Chinese gang members and hitmen who also have a stake in the drug deal, including the menacing “One-Armed Wang.”

If this all sounds like something out of the fantasies of a young Quentin Tarantino, it pretty much feels that way, too, cross-cutting between various members of this criminal underworld and using some killer pop music cuts on the soundtrack. What really makes it sing is Miike’s signature off-kilter humor, which gives the movie some much-needed zing whenever it threatens to go slack for longer than… oh, a couple of minutes. There’s nearly always something interesting or funny happening, but the film never feels overstuffed. This is probably because whenever the film focuses on Leo and Monica together, the film becomes genuinely sweet. Their relationship blossoms very slowly, and there’s never any doubt where it’s headed, but watching these two slightly broken people awaken something in each other amidst all the chaos surrounding them is quite lovely. But even then, Monica is having withdrawal-induced visions of her father in his underwear, and he keeps showing up at the most inconvenient times, so there’s always the threat of wackiness lurking in the background whenever she’s on screen.

There’s a lot to love in “First Love,” and in moments, it can feel quite unpredictable. I say “in moments,” because the full narrative arc is pretty generic and the film never deviates from it even in the slightest. Every time Miike could go completely off the rails, he reins himself in, pulling back where barging ahead would make this an even more memorable (if messier) experience. This screened as part of the Midnight Madness program at the 2019 Toronto International Film Festival, and while it has some shout-at-the-screen crazy moments, it never quite feels like the type of film that will gain true “cult status” among even Miike’s most hardcore devotees. It feels at times like Miike has sanded down the sharper edges of the film in an effort to focus more on the filmmaking craft instead of the craziness that has made him such a beloved provocateur. Not that there’s anything wrong with that, and “First Love” is still a blast to watch, but after it’s all over, you can’t help but wish it had gone even further. For example, you can imagine what Tarantino would do with a character named “One-Armed Wang”, but he’s ultimately barely even a presence in “First Love,” mostly only present for a final battle that hits the right gory notes, but never really sings because it’s between two people we barely know.

And maybe that’s why “First Love” doesn’t feel like a great film: It’s ultimately more interested in what’s happening with Leo and Monica than with the yakuza storyline, and the latter is where all the fun stuff is happening. The cast, mostly playing stock characters, really relish the moments when they get to break out into crazy mode, and it’s those moments that really stick with you after the film is over. The love story has its moments too, even some really funny ones, but you can’t help but wish Miike would have really pushed the pedal to the metal and given us the all-out, balls-to-the-wall violent crazy work of pulp fiction we know he has in him.