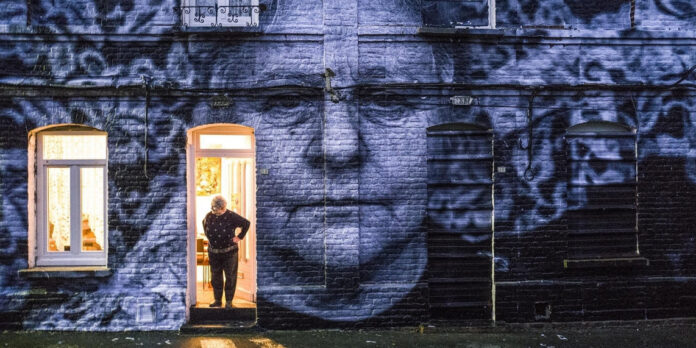 THE STORYDirector Agnès Varda and photographer and muralist JR journey through rural France and form an unlikely friendship.

“Faces Places” exemplifies the raw power of interpersonal connection and the compassion and education that can come from simply meeting new people and listening to their stories. The film simultaneously pays tribute to the democratic ethos of our social media culture – the belief that there is value in presenting routine lives to a public audience – and laments the culture’s perpetuation of digital detachment instead of in-person conversation. As a film grounded in the conversational exchange between, and the artistic display of, real people, “Faces Places” is also an ode to the importance of documentary storytelling.

The documentary tracks the collaboration of 93-year-old filmmaker Agnes Varda and 34-year-old photographer JR (The two serve as co-directors here) as they visit various villages and towns in France. During each of their stops, Varda and JR speak with the locals, learn about their day-to-day lives, and take their photos. What follows is truly remarkable and moving, and an extension of JR’s work as a muralist: Varda and JR print a larger-than-life version of the photo of their subject and then affix the photo to a physical structure for the whole town to see. For example, the two filmmakers visit a dilapidated mining town and meet an elderly woman who is the last remaining resident of a row of houses once reserved for miners and their families. After their conversation with the woman, they take her picture and display it on the front of her house. On paper, this idea may sound trivial and perhaps even a little tacky – living in a home with a giant photo of yourself on the front of the house? In practice, though, the gesture is lovely, a testament to the strength and endurance of a woman determined to keep the memories of her deceased neighbors and loved ones alive. All of these moments in “Faces Places” – from the portrait of industrial workers displayed on a wall located at the company’s plant, to the image of an umbrella-clad waitress that adorns the side of a building in her neighborhood – provoke a similarly profound reaction.

“Faces Places” pairs this collection of art and conversations with a touching examination of the friendship between Varda and JR. Born nearly six decades apart, the two artists bond over their mutual admiration of each other’s work and for their shared sense of spontaneity. The film also plays with the motif of sight. Varda chides JR for always keeping his eyes disguised underneath his sunglasses, while he accompanies her to the hospital for a surgery meant to ameliorate her poor vision. Meanwhile, their art urges community members to see their neighbors in a more thoughtful way.

Varda and JR are a delightful team. Their adventures might not carry broad appeal, and “Faces Places” may test the patience of some viewers due to its numerous variations on the same situation, namely, meet-and-greets in local towns followed by photos and then the big reveal of the murals. Nonetheless, “Faces Places” is a moving and transcendent experience. Varda and JR encourage us to view art as a vehicle through which human understanding can be achieved.

THE GOOD – Agnes Varda and JR serve as an entertaining duo, and the art and conversations that they produce are deeply moving.

THE BAD – The film may test the patience of viewers due to its recurrence of similar situations.
​
THE OSCARS – Best Documentary Feature (Nominated)