“ETERNAL SUNSHINE OF THE SPOTLESS MIND” 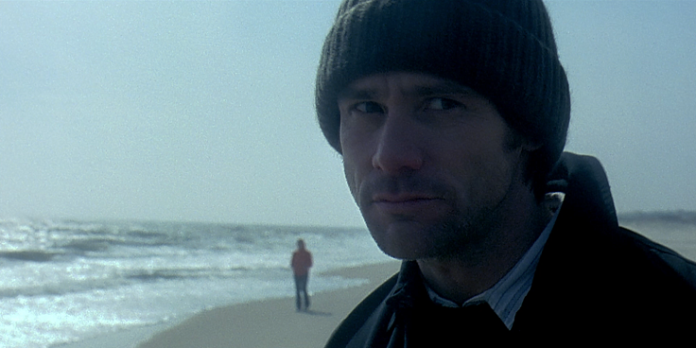 THE STORY – After a painful breakup, Clementine (Kate Winslet) undergoes a procedure to erase memories of her former boyfriend Joel (Jim Carrey) from her mind. When Joel discovers that Clementine is going to extremes to forget their relationship, he undergoes the same procedure and slowly begins to forget the woman that he loved. Directed by former music video director Michel Gondry, the visually arresting film explores the intricacy of relationships and the pain of loss.
​
THE CAST – Jim Carrey, Kate Winslet, Kirsten Dunst, Mark Ruffalo, Elijah Wood & Tom Wilkinson

We’ve all been there. We’ve all fallen in love with someone and have had rough patches where we wished that we could erase that person from our memories. In “Eternal Sunshine of the Spotless Mind” that wish becomes a reality, resulting in one of the most poignant and originally written/conceived films of all time. Directed with a plethora of filmmaking techniques by Michel Gondry and written to evoke a profound insight into how relationships start, transform and come undone by the gifted Charlie Kaufman, “Eternal Sunshine of the Spotless Mind” is a masterpiece that deserves to never be erased from your memory.

Joel Barish (A vulnerable Jim Carrey) is uninteresting, lonely and insecure. He’s having a rough day as he awakes all confused, finds out his car is wrecked and has an impulse to skip work on Valentine’s Day in Long Island New York, and takes a trip to Montauk. Along the trip, he meets Clementine (Kate Winslet) who is as loud and outgoing as much as the color of her own hair. They are instantly drawn to each other until the film flashes back to reveal that Clementine and Joel had previously been together. One night after a fight between the two, Clementine brashly decided to have Joel erased from her memories through a company called “Lacuna Inc.” Not being able to take the heartbreak, Joel decides to undergo the procedure as well. It’s not until his memory of the woman that he loves is being erased that Joel decides to try and preserve whatever memory he can of her before she is completely gone.

If the premise of this movie sounds downright insane, it completely is. However, there is an honest quality through which Charlie Kaufman constructs the screenplay, resulting in an insightful look at the connection established between two people when they fall in love. Kaufman is fully aware that the “honeymoon” phase is the best phase of any relationship and that they will inevitably go downhill. Are relationships fully sustainable? If we lose the person we love, are we destined to find them again? These are all questions that Kaufman is exploring through his writing and the answers are whatever the viewer makes of them. The film can either be seen as a hopeful or cynical look at relationships depending on the experiences that the viewer brings to the film, and that is where the true greatness and timelessness of this film lies.

Jim Carrey, who is known for his wild and crazy roles plays a version of himself that his loyal fanbase might be taken aback by. He is awkward, reserved, and warm in his role of the heartbroken Joel Barish who “seems to fall in love with every woman who gives him the least bit of attention.” Kate Winslet is playing the type of role that Jim Carrey is used to doing. She is wild, eccentric and impulsive in her thoughts, delivery, and actions. Both are at their very best here as they form a unique chemistry that is instantly relatable and engaging. They are complete opposites of one another and even though that is where the rut in their relationship lies, it’s also why they are so good together.

“Constantly talking isn’t necessarily communicating,” Joel says to Clementine in one scene of the film. And this is a film that doesn’t just feature a lot of (brilliant) dialogue. Director Michel Gondry employs creative filmmaking techniques from the excellent editing of Valdis Oskarsdottir, to the unique cinematography by Ellen Kuras, and the subtle visual effects to accurately show how Joel’s memory is collapsing throughout the film. Gondry strikes the right balance between realism and surrealism, as he takes the audience on a wild ride through Joel’s brain, which results in one memorable scene after another.

The screenplay is truly a wondrous labyrinth as it starts at the end and works its way backward until we end up right back where we started. Each repeated viewing gives a different perspective to the film’s message and its characters depending on your own life experiences. This is not only achieved through the film’s two leads but also through its supporting characters. Tom Wilkinson, Mark Ruffalo, and Kirsten Dunst each have their own backstories and relationships between one another that reach their own thoughtful conclusions by the end of the film.

“Eternal Sunshine of the Spotless Mind” is bizarre and intellectual in its exploration of the human heart and how that clashes with the human brain. Love cannot be fully defined, but Kaufman and Gondry come pretty close to communicating universally how we are drawn to people, how we grow to love someone, and how that love stumbles. It rightfully won the Academy Award in 2005 for Best Original Screenplay for its whacky yet ingenious look at these themes and has rightfully earned its place on the list of one of the greatest romantic films of all time.