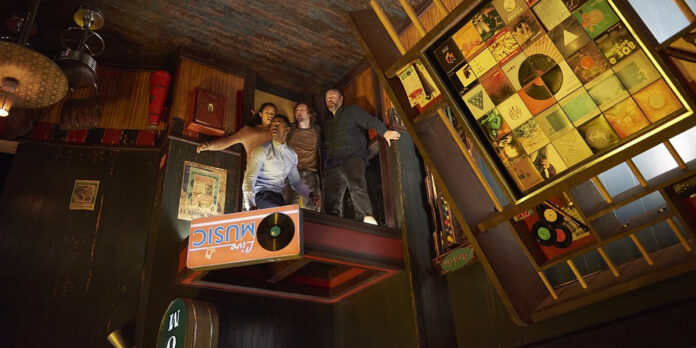 THE STORY – Six adventurous strangers travel to a mysterious building to experience the escape room — a game where players compete to solve a series of puzzles to win $10,000. What starts out as seemingly innocent fun soon turns into a living nightmare as the four men and two women discover each room is an elaborate trap that’s part of a sadistic game of life or death.

​Typically January is a month filled with lackluster releases but every now and again there are some surprises. There are some solid releases within this month, some mediocre releases, some bad releases, and then there’s “Escape Room.” This film transcends the word disappointing and shifts into its entirely own category of terrible. The script is awful, the acting is laughable, the direction is completely confused and all over the place. The film tries to gain momentum through its mystery but the mystery is hollow and feels way too fabricated to be as interesting as it claims to be. The twists and turns aren’t justified, thus making the reveals within the story feel sudden and pointless. “Escape Room” is a travesty that is better to just avoid or if you can’t manage to do that and you find yourself watching it…you should at least try to escape.

Six completely different individuals all receive the same mysterious invitation from a trusted person in their life that offers them a chance to win $10,000. All they have to do is escape the most immersive escape room known to man. But shortly after beginning the competition, they figure out that the game they are participating in is deadly real and they must escape each ingenious and terrifying trap before they are killed.

You can tell that the film is clearly trying to capture the vicious magic that the “Saw” franchise managed to a few years ago. The issue is that “Escape Room” falls completely flat on its face. While the concept is similar to that of the “Saw” films, it feels lackluster for several reasons. While the situations the characters get put in feel clever, they don’t really have the same stakes or tension that films of the same caliber do. “Escape Room” is just an empty bag of tricks that can never fully get a hold of its own concept.

While there are plenty of holes to poke in the filmmaking, “Escape Room’s” biggest enemy is actually itself. It has the ability to be really inventive and unique but it can’t seem to get any further off the ground than the surface level. It falls flat on its face and causes a cascade of different disappointments. While it seems the film may be cheesy and ridiculous in its approach, it takes itself just a bit too seriously, asking us to take it seriously, which is what sets itself up for failure.

The story is so over the top and ridiculous that the film either purposefully will poke fun at the situations or try and make you think that what they’re showing on screen has some form of integrity but it does not. They sprinkle several twists and turns into the story in an attempt to craft some form of mystery that will keep you interested but each twist is more ridiculous than the last. The scope of the lackluster story becomes grander as the story moves along, forcing the filmmakers to scramble and struggle. It becomes a balancing act that is so preposterous that it gives the viewer a headache.

I could go all day with how many flaws are contained within “Escape Room.” The script is god awful, the acting from everyone involved is laughable, the direction can never choose which path it wants to follow, the scares are predictable and useless. It just is a complete and total bore from start to finish. The film never fully finds its footing and just constantly drags along until it thinks that it arrives at some form of a resolution but it does not. Events happen for no rhyme or reason and everything just kind of gets thrown at you in an odd way that feels like you’re being beaten over the head with a cinder block of useless information.

“Escape Room” is a lousy beginning of the year release that is just a straight up pile of garbage. A terrible script, horrendous acting, unfocused directing, pointless scares, everything completely falls apart. While it tries to mimic what made the “Saw” franchise popular, it simply does not succeed. The film had some room for momentum but is completely dead on arrival which is disappointing. Escape this one if you can.