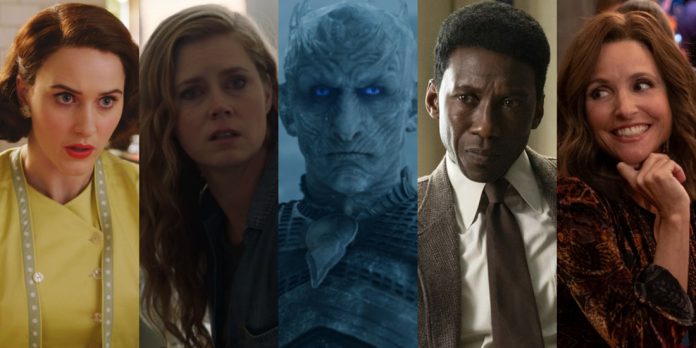 ​It’s that time of year: Television is on fire right now.

​Much like the way the films released in October, November, and December curve upward in quality, giving them prime release dates for award-season consideration, the television universe gets bombarded with the best the industry has to offer about this time of year, in the months of April and May. Each Emmy consideration period begins and ends every June, therefore companies prioritize their best bets for consideration from the Television Academy during this time of the year. This adheres to the long-respected tradition that awards-seeking media are best served when fresh in the minds of voters.

After taking a year hiatus, “Veep” is now two episodes into its final season. The one-and-only Julia Louis-Dreyfus and the brilliant writing have returned in top form. During the Golden Globes, SAG, and Critics Choice award shows this past January, the mood in the air was such that “The Marvelous Mrs. Maisel” will be the new unbeatable Emmy champion. However, now that “Veep” is back it’s clear as day to me: the HBO political satire will reclaim the titles of Best Comedy Series and Best Actress in a Comedy Series from Amazon Prime’s golden child. There are institutional benefits that make “Veep” incredibly difficult to surmount in its final season. It’s most analogous to “The Handmaid’s Tale” used its cultural zeitgeist status to win Best Drama Series at the Emmys the year another HBO giant, “Game of Thrones,” was off the air. As we all know, “Game of Thrones” returned to the Emmy race and beat “The Handmaid’s Tale’s” second season. The parallels between those shows and “Veep” and “The Marvelous Mrs. Maisel” are uncanny.

While we’re on the topic, “Game of Thrones” final season begins its final rollout this weekend. Next Best Picture’s own, Matt Neglia, attended the world premiere of “Game of Thrones” in New York last week. He said the premiere has “epic moments, intriguing politics, shocking reveals, and exciting reunions.” This show will no doubt deliver. Like “Veep,” it’s difficult to imagine Emmy voters would reject the iconic series unlike any other for its swan song. HBO has won three trophies for each of “Game of Thrones” and “Veep” for best series in their respective category, and this will be the final year of HBO’s (arguably justified) monopoly over Emmy voters with these two titans.

“Killing Eve,” BBC’s sleeper hit from last year, returned for its second season this past weekend with comparable reviews from the most prestigious critics. Though it only factored into the Best Drama Actress and Best Drama Writing categories at the Emmys last year, there’s no doubt its heightened profile (thanks to Sandra Oh’s star power) will propel it into the conversation. I was not crazy about the tepid, dragged-out premiere and the handling of an already-shaky season one cliffhanger, but that seems to be the minority opinion. I sincerely hope Jodie Comer gets acknowledgment along with Oh in Best Drama Actress this year. Another show which premiered this week is “Fosse/Verdon,” with Hollywood heavyweights Sam Rockwell and Michelle Williams. The reviews have been more divisive than I expected, with only a Metacritic score of 68. The eight-episode miniseries will likely rival “Sharp Objects,” (which I consider a masterpiece), and “Escape at Dannemora” for above and below the line limited/movie categories.

Although the Emmy voters are still probably going to give it a pass, CBS All Access has emerged as the go-to place for smart entertainment that feels the pulse of the 2019 culture like no other network. “The Good Fight” returned a month ago and, with season three, has perfected the ideas they implemented in their dizzyingly superb second season. I do not know how Robert and Michelle King continue to outperform themselves. The more they lean into President Donald Trump and issues of race and gender, the higher they boldly fly. Thus far, “The Good Fight” season three is outstanding – it’s the best show on television. The woke, resistance-focused spinoff deserves to be on the Emmy’s radar for Drama Series, Writing, Christine Baranski, and especially Audra McDonald, who has emerged as the MVP of the third season. CBS All Access has also introduced a revival of “The Twilight Zone,” with Jordan Peele at the creative helm. How much more relevant can you get than that? Will Peele’s signature visual and atmospheric style from “Us” and “Get Out” translate seamlessly to a television format in “The Twilight Zone?” I would argue the first anthropology chapter with Kumail Nanjiani was bit stiff, but the second episode with Adam Scott was a tightly-wound thrilling ride.

While these are not the only contenders for the upcoming Emmy season (I have high hopes for a show I loved from earlier this year “Homecoming,” which features some of the best work Julia Roberts has ever done), many of these shows will likely be leading the pack and forming the conversation.

Stay tuned for more Emmys coverage and for more podcast episodes on Next Best Series. Let us know your thoughts on this year’s Emmy season in the comments section below or on our Twitter account.