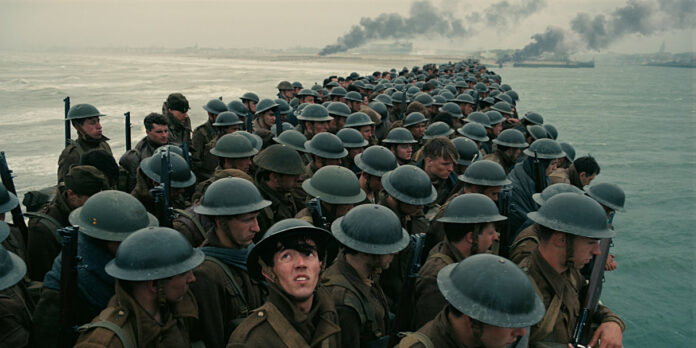 THE STORY – In May 1940, Germany advanced into France, trapping Allied troops on the beaches of Dunkirk. Under air and ground cover from British and French forces, troops were slowly and methodically evacuated from the beach using every serviceable naval and civilian vessel that could be found. At the end of this heroic mission, 330,000 French, British, Belgian and Dutch soldiers were safely evacuated.

​I cannot believe I am about to say this. I may take a lot of flack for saying it. But here it goes, I am going to say it. “Dunkirk” is Christopher Nolan’s best film. There, I said it. It may not be his most accessible film nor his most entertaining. However, it is the most important film he has ever made as well as the most technical. In the early stages of his career, Christopher Nolan played around with nonlinear structure to give us crime dramas such as “Following” and “Memento” which were high on character. He then became one of the biggest blockbuster directors in the world with films such as “Inception” and “The Dark Knight.” More recently his filmmaking has pushed the boundaries of the medium with epic and ambitious films such as “The Dark Knight Rises” and “Interstellar.” Now with “Dunkirk” he still utilizes nonlinear structure, makes the film furiously as gripping as his blockbuster films and provides it with the same level of scale that he has brought to his most recent films. In short, “Dunkirk” might just be Nolan’s masterpiece.

“Dunkirk” follows three separate timelines during the legendary evacuation of 330,000 men from the beaches of Dunkirk France, while the French and British soldiers were surrounded with their backs to the beach. It follows a British Army Private named Tommy (Fionn Whitehead) by land, on the beach for a week. Meanwhile, we also track a civilian boat manned by a mariner named Mr. Dawson (Mark Rylance) along with his son Peter and his son’s friend George. We follow them for a single day as the trio ride to the beaches of Dunkirk to rescue as many men as they can after a distress call has been put out. And finally, we follow a Royal Air Force pilot named Farrier (Tom Hardy) as he and another pilot do the best that they can to protect their countrymen from the air. With hope slowly fading away, the men all race against time to stay alive for as long as they can until help arrives.

“Dunkirk” is unlike any other film I have ever seen. Nolan found a way to take a genre we know a lot about, the war film, and turn it on its head to give us something original and breathtaking. “Dunkirk” uses its three timelines to maximum effect to tell a complete overview of the Dunkirk evacuation from three different perspectives and finds a way to weave them all together towards the end, providing some of the most powerful moments on screen this year. The film is also unique in that, we the audience never see the enemy. We never see the German troops shooting on the ground. We never see the commanders in their submarines. We’re never seeing anything from their point of view from within the cockpit of a plane. I cannot remember a time where I have ever seen that before in a film. Utilizing the largest film camera possible (IMAX) and projecting it as such all over the world, “Dunkirk” begs to be seen on the largest screen possible. Why may you ask? Simply because the level of immersion which Nolan creates through this film is simply extraordinary.

Nolan is a storyteller in full command of his craft as he transports us to the land, sea, and air. We experience the film through the eyes of the brave soldiers and civilians who were involved in the evacuation. We never get to fully know any of the characters. For the first time in his career, Nolan is not interested in characterization. Instead, “Dunkirk” is an impressionist film that utilizes camera angles, editing, music, sound and realistic performances to engage us within the viewing experience. There are no dialogue scenes where the characters get a breather to talk about their lives back home nor is there a direct mission the soldiers must embark on in an effort to win the war. In fact, there are long stretches of time where there is barely any dialogue at all. It feels though as if we are a fly on the wall (or on the beach as it were), witnessing history unfold before our very eyes. These are real men, trying to survive and by surviving, they win. It’s in the final moments of “Dunkirk” where Nolan truly knocks it out of the park thematically and really sells the emotion of how survival is its own form of victory.

“Dunkirk” is not a personal film in any way. We never truly get to know any of the characters. Despite having actors such as Mark Rylance, Tom Hardy, Cillian Murphy, Kenneth Branagh and yes, One Direction’s Harry Styles in the film, no one truly stands out. Everyone is in service to Nolan’s vision for what it must have been like for the men that were trapped on that beach. It’s often terrifying and never once lets up during its extraordinarily brief 106 minutes running time. Technically, “Dunkirk” rivals anything that Nolan has put out before. The cinematography by Hoyte van Hoytema is grand in scale and utilizes the IMAX cameras brilliantly. Lee Smith’s editing is effortless and creates a tremendous amount of anxiety for the viewer as it cross-cuts back and forth between the three timelines. Hans Zimmer’s score made me grip my chair for dear life as it and the sound designed continued to get louder and louder. The experience of tension and release reminded me very much of how I felt watching “Gravity,” another technical wonder that was relentless in its tension.

“Dunkirk” is unlike any other Christopher Nolan film that has come before it and as a result, it may be regarded by many as his best film.  It’s certainly his most artful and mature in terms of its storytelling and filmmaking techniques. The respect he pays towards the event itself by making that the focus of the film instead of manufacturing fabricated characters with a Hollywood-ized story might be the bravest decision I see a mainstream director such as Nolan make all year. While I recognize that he has made other films which are more conventionally entertaining, I admire “Dunkirk” because it dares to be unconventional. It’s a singular vision from a filmmaker who is operating at the peak of his career and it’s a vision which I will never forget.