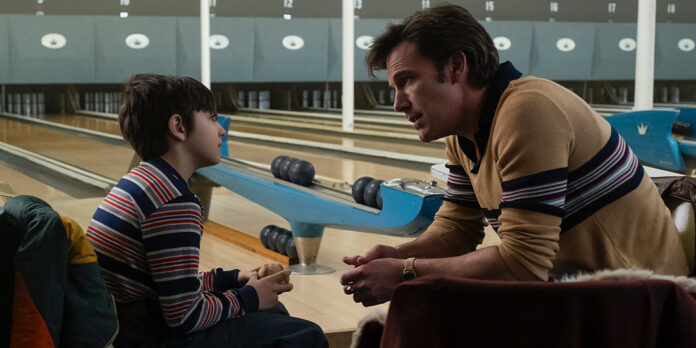 THE STORY – In 1972, 9-year-old J.R. Maguire moves into his grandfather’s dilapidated house in Long Island, N.Y. Searching for a father figure, he falls under the unconventional tutelage of his uncle Charlie, a charismatic, self-educated bartender who introduces him to a handful of the bar’s colorful regulars. As the years pass and J.R. grows into a young man, he tries to fulfill his dream of becoming a writer.

Tracking the career of George Clooney as a director has been one fraught with inconsistencies, to put it mildly. The first entries promised an auspicious path with intriguing works, particularly with celebrated Oscar nominees such as “Good Night, and Good Luck” and “The Ides of March.” However, his more recent output has struggled to achieve the heights of those earlier projects. One would hope that after traversing a diverse set of topics and genres, Clooney would finally be able to present a story that matches the intimate perspective and the engaging narrative he previously managed to capture. Unfortunately, “The Tender Bar” only continues this trend of lackluster directorial efforts, despite some charming moments occasionally at play.

“The Tender Bar” is a coming-of-age tale based on the memoir by J.R Moehringer. His story begins in 1970s Long Island, where he (Daniel Ranieri) and his mother (Lily Rabe) have moved back to the family home during a time of hardship, where they are constantly on the receiving end of his curmudgeonly grandfather (Christopher Lloyd). J.R. is attempting to learn valuable life lessons, and none come from a more trustworthy source than his Uncle Charlie (Ben Affleck). While running the local bar, Uncle Charlie imparts all the wisdom he can onto his nephew in his own idiosyncratic style while also nurturing his needs and interests. When an older J.R. (Tye Sheridan) goes off to college, he finds more trials and tribulations to navigate as he forges his own path ahead.

As stated, this is another entry into the erratic filmography of Clooney’s offerings as a director. While one is tempted to praise the diversity of his portfolio, it often leads one to suspect a lack of coherent vision. This may be his blandest and most pedestrian endeavor to date, with the filmmaking rarely obtaining any inventiveness to make it compelling. There is something to be said for the way Clooney is able to get warm performances from his actors, a skill that is often unsung in terms of directing. However, he also doesn’t create a sense of investment within the story and permits scenes to play out with little sense of momentum. Nothing presented is downright terrible, but it commits the possibly greater sin of being mundane. The direction is straightforward but not in any way that hones in on an intimate perspective in a meaningful attempt and instead comes across as glossy and hollow.

Additionally, William Monahan’s screenplay doesn’t fare much better. The foundational elements of the story are plainly presented in a manner that rarely endears one to this setting and characters, and the emotional stakes embedded within are quite shallow. There is a lack of drama that propels things forward, and the motivations that are present tend to be familiar tropes that do not find creative methods in their development or resolution. The main problem isn’t necessarily that the material trades on well-known archetypes, but rather that it does not invest any depth of characterizations to make them captivating. This is felt most sharply in a care-less half-hearted romance that’s developed in the second half. Monahan’s career has also been marred with inconsistency, and despite winning an Oscar for the snappy script to “The Departed,” this piece feels lethargic in every beat it uncovers.

However, a nicely assembled group of actors manages to provide appealing performances, even though they are given less-than-stellar material. Both Ranieri and Sheridan do serviceable work carrying the film, embodying the spirit of a young man well enough while never offering anything extraordinary in their portrayals. Rabe does have some lovely moments that showcase her comedic delivery and authentic emotion. The same being said for Lloyd in a more background role. The real standout is Affleck delivering an infectious charm in every moment. The writing never really gives him a satisfying arc to make the most impact, but he shares a lovely rapport with every screen partner. He exudes an effective earnestness that exposes a gruff yet compassionate persona that easily makes him the most exciting figure to follow.

Much of what underscores “The Tender Bar” is, sadly, a lot of overly recognizable aspects that have appeared in much better films. While there is some appeal in the ensemble, particularly from Ben Affleck, what surrounds these performances is a flaccid plot littered with flat characters who occupy dull motivations. In all honesty, one could say this is not the worst film that George Clooney has directed, but it might be his most aimless and trite. There is a persistent optimism that the provocative spirit of his earlier filmography can once again be crafted. Sadly, such notions are evaded once again.