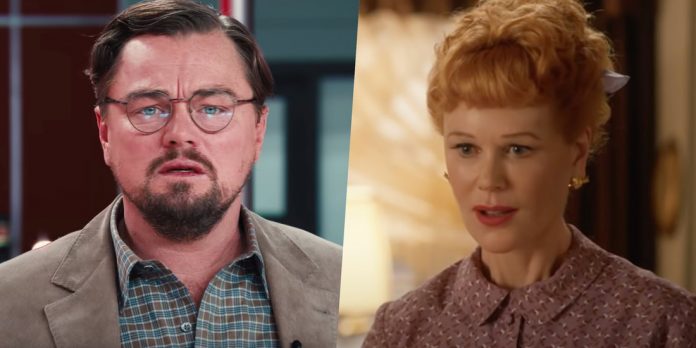 At the beginning of November, “Don’t Look Up” and “Being The Ricardos” were at precarious places in the Oscar pecking order, thanks to poorly received trailers and their always controversial writer/directors. Yet, according to pundits and early critics who saw their first screenings in the last week, those questionable early looks were quite deceiving. Now, this sets the stage for both of them to go from potential bombs to the most hotly debated awards season films.

Unlike “The Trial of the Chicago 7” all last season, Aaron Sorkin’s entry this year was considered an Oscars afterthought until recently. Otherwise, it drew some considerable fire for the offensively inaccurate casting of Spanish actor Javier Bardem as Cuban icon Desi Arnez, the first teaser’s puzzling concealment of Nicole Kidman as Lucille Ball, and a Hollywood Reporter interview where Sorkin appeared more tone-deaf than ever to his critics. It painted an ugly picture for the movie before it ever screened – at least until it screened.

In contrast, “Don’t Look Up” had high expectations from the very start. With Netflix’s backing and Adam McKay writing and directing for countless A-listers in the most topical movie of the season, it might have made a comet-like impact with or without positive reviews. Yet after its own opening trailers underwhelmed, and after other movies got a head start in buzz while “Don’t Look Up” skipped the fall festivals, it garnered justified skepticism before its first look on November 18th.

After all that, “Being The Ricardos” and “Don’t Look Up” have become late-breaking threats in the race, at least according to the initial reactions. Of course, once more critics and different types of audiences watch it, responses may be and probably will be far more polarizing. Considering Sorkin and McKay’s track record, there’s pretty much nothing else that they could be. Yet thanks to these far better than anticipated first reviews, they still appear set to barge their way into another Oscar race regardless.

Since his unanimous praise and Oscar win for “The Social Network” a decade ago, Sorkin has come nowhere close to winning such unity again, thanks to the highs and extreme lows of “The Newsroom,” “Molly’s Game,” and “The Trial of the Chicago 7.” A seemingly lighter story and subject like “Being The Ricardos” might have gotten him in less trouble, if not for the casting and his less than stellar defense of it so far. As for McKay, his near-unanimous praise and Oscar win for “The Big Short” faded fast after the far more divisive “Vice,” with “Don’t Look Up” poised to get him in more hot water, both for his attacks on the right and his over-the-top comedy and messaging on behalf of the left. Perhaps that makes him the new Sorkin, especially with his own love of monologues and grandiose political statements, yet he’s become more like the new 80s/90s Oliver Stone – for good and ill.

As much as many on Film Twitter and the left and right may hate Sorkin and McKay for different reasons, Academy voters are a different story. They have given both Sorkin and McKay screenplay Oscars, nominated multiple movies of theirs for Best Picture, and are perhaps the target audiences for their hyperverbal monologues, political grandstanding, and star-studded casts. As such, if Oscar pundits are bullish over their latest efforts after their mixed expectations beforehand, then one can only imagine how voters will react in the next several weeks and months. These perceptions have already shifted the look of a few significant races, at least in terms of the nomination stage. Not only are “Being The Ricardos” and “Don’t Look Up” right on target for Best Picture nominations if this early momentum continues, but each of them could also have a potential nominee in every single acting field, pose a threat in Best Original Screenplay and perhaps lead the way at the SAG Awards. And while both Sorkin and McKay are probably still longshots as director nominees, anything could happen if their films hit big enough with voters.

For “Being The Ricardos,” the biggest beneficiary of its early raves may not be Sorkin, but Kidman. She didn’t get the level of backlash that Bardem’s casting did, yet a lot of skeptics and Debra Messing fans weren’t convinced she was the right Lucy, especially when the first teaser hid her for the most part. But if the high praise now and praises to come keep drowning those skeptics out, Kidman could not only reach the Best Actress field but pose the biggest threat to Kristen Stewart, for what would be her first Oscar in almost 20 years. Meanwhile, fellow cast members Bardem, J.K. Simmons, and Nina Arianda are merely on the bubble in their respective categories at best, yet one, two, or all three of them could sneak in with some breaks.

For “Don’t Look Up,” its massive all-star cast could also threaten to crack every acting field. Like in “The Wolf of Wall Street” and “Once Upon a Time in Hollywood,” a comedically unhinged Leonardo DiCaprio may find his way into Best Actor, though critics cite a thunderous “Network” style speech as his likely Oscar clip. Best Actress might be too crowded for Jennifer Lawrence to find her way back in, yet someone who got an Oscar win and four nominations in her early-to-mid 20s can’t be counted out with the Academy. And among “Don’t Look Up’s” massive supporting cast, Jonah Hill and Mark Rylance are cited as its best hopes for Supporting Actor nominations, while multi Oscar-winning icons Meryl Streep and Cate Blanchett are lurking around in Supporting Actress.

As for Best Original Screenplay, it’s pretty possible that Sorkin and McKay might have a showdown ahead for the final spot, if not the win later on. The likes of “Belfast,” “Licorice Pizza,” “King Richard,” and “C’mon C’mon” already made this category crowded enough before Sorkin and McKay barged back in, so there might only be room for one of them. Assuming they both get in, defeating Best Picture frontrunners “Belfast” and “King Richard” as well as the overdue Paul Thomas Anderson for “Licorice Pizza” might be too tall an order for even Sorkin or McKay – or so it would seem so far. Yet if “Being The Ricardos” or “Don’t Look Up” rise high enough, voters may well use it as an excuse to award Sorkin or McKay again, regardless of whether everyone is happy about it.

It might well be too much to imagine “Being The Ricardos” or “Don’t Look Up” as a threat for Best Picture itself, considering the crowd-pleasing advantages of “Belfast” and “King Richard” and the critical embrace for “Licorice Pizza” and “The Power of the Dog.” At this point, the most they can do in Best Picture is get nominated, which is probably an easier task for “Don’t Look Up” than “Being The Ricardos” right now. Yet the odds are probably in favor of both getting in, depending on the remaining reactions and the rest of the bubble films. Things will get slightly clearer when their full review embargoes break on December 7th, when they each reach theaters on December 10th, and when “Being The Ricardos” hits Amazon on December 21st before “Don’t Look Up” crashes into Netflix on Christmas Eve. By then, enough people will have weighed in to show if these enthusiastic first responses were premature – just as the trailer responses seem to have been premature.

It is somewhat ominous to think about Film Twitter fighting over Sorkin and McKay in the same season, especially if both their films and several of their stars are on the bubble. But considering how there’s been little fighting so far over “Belfast” and “King Richard” being frontrunners over the more acclaimed “The Power of the Dog” and “Licorice Pizza,” maybe controversy over Sorkin, McKay, “Being The Ricardos” and “Don’t Look Up” instead is the tradeoff. Whatever happens, it appears both will factor into this race in some capacity, regardless of how their first looks made them look. Depending on how much louder their fans and eventual critics get and how much Sorkin and McKay inevitably shoot their mouths off in the meantime, they will likely go far from quietly.

How do you feel “Don’t Look Up” and “Being The Ricardos” are going to play in thus year’s awards race. Do you feel they are the last two films to join the party or will Steven Spielberg’s “West Side Story” and Guillermo del Toro’s “Nightmare Alley” be joining them in a few days? Check out the NBP team’s latest Oscar predictions here. Let us know your thoughts in the comments section below or on our Twitter account.