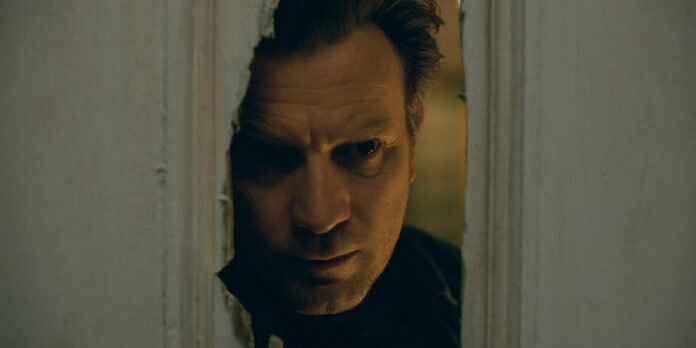 THE STORY – Struggling with alcoholism, Dan Torrance remains traumatized by the sinister events that occurred at the Overlook Hotel when he was a child. His hope for a peaceful existence soon becomes shattered when he meets Abra, a teen who shares his extrasensory gift of the “shine.” Together, they form an unlikely alliance to battle the True Knot, a cult whose members try to feed off the shine of innocents to become immortal.
​
THE CAST – Ewan McGregor, Rebecca Ferguson, Kyliegh Curran & Cliff Curtis
​
THE TEAM – Mike Flanagan (Director/Writer)
​
THE RUNNING TIME – 153 Minutes

​​”The Shining” is one of the most fascinating and endlessly debatable films ever made. Whether author Stephen King likes Stanley Kubrick’s 1980 version or not (he mostly doesn’t), there’s no denying the imprint it has left on the horror genre and for cinema in general. Director Mike Flanagan (Netflix’s “The Haunting of Hill House”), has the tough task of not only adapting Stephen King’s sequel novel “Doctor Sleep” to the screen, but he also has to contend with the legion of Kubrick supporters who hold “The Shining” near and dear to their hearts. Surprisingly, he succeeds, even though “Doctor Sleep” itself never matches the cinematic highs of Stanley Kubrick’s 1980 horror masterpiece.

Danny Torrance (Ewan McGregor) has been struggling with alcoholism, much like his father did years prior before he met his demise at the Overlook Hotel while trying to murder Danny and his mother. Traumatized by the events of his childhood, he lives a quiet life of seclusion, until one day his “shining” abilities force him to come into contact with Abra (newcomer Kyliegh Curran), a gifted young girl with shining powers stronger than his. Currently being hunted by a cult known as the True Knot, run by Rose the Hat (Rebecca Ferguson), Abra turns to Danny for help and guidance as the two make their stand, which leads Danny to confront his past.

Mike Flanagan takes his time with this story. At over two and a half hours long, it’s actually longer than “The Shining” itself. However, one thing that its predecessor has that this new chapter doesn’t is that it lacks its density and multitude of fan theories, which has led to the enduring legacy of “The Shining.” Flanagan’s film is more straight-forward and in line with conventional studio horror films of today. Never once does it dare to push boundaries or break new ground as Stanley Kubrick’s film did. It doesn’t skimp out on giving the character Danny Torrance a ton to do and it certainly pays homage to “The Shining” in all of the right ways that make sense. This allows Danny the closure he seeks and in doing so, ties together the themes of both of Stephen King’s books. However, I never found anything about “Doctor Sleep” to be worthwhile enough to discover on a second viewing. I feel I got everything I needed to get out of it, which was a bit of a disappointment for me.

Also, in terms of the “horror” aspects, Flanagan does create some good jumpscare moments and his command over the style and tone of the film can be felt throughout. However, and I understand this is a highly subjective statement, barely anything scared me on a thematic level when it came to “Doctor Sleep.” Its ideas were more fantasy based and didn’t resonate with me the same way “The Shining” did. I love Rebecca Ferguson’s campy performance as Rose the Hat, though; she’s wickedly seductive and dangerous. However, The True Knot’s desire to gain long life by feeding off of the pain and fear of those with “steam” (or shining) abilities, was too out there for me at times to take seriously. And this isn’t even taking into account that she starts nearly every scene by saying “Well, hi there,” which I’m sure will become a running meme on the internet at some point. There is a brief, horrifying scene featuring Jacob Tremblay that made my skin crawl, but that was one moment in a two and a half-hour film that should’ve filled me with the same amount of dread and horror – It didn’t.

Even though there are moments which drag, and moments of clunky dialogue or unclear exposition – you’re in a state of mystery for at least the first hour as to what the hell the plot actually is – everything culminates in a final showdown at the Overlook Hotel, with Danny having to confront his past trauma, which results in what is easily the film’s best scene. Featuring shot-for-shot re-creations of Stanley Kubrick’s iconic film, identical production design and some re-casting that is incredibly spot-on despite the near 40 years since “The Shining’s” original release, Flanagan’s dedication and passion for this story reaches incredible heights here.

A commentary on death, alcoholism, abuse, and trauma, “Doctor Sleep” brings Stephen King’s ideas and themes to the forefront in a clever way, while not totally disregarding Stanley Kubrick’s film. Ewan McGregor gives a solid performance as a grown-up Danny Torrance, with Rebecca Ferguson chewing up the scenery and standing out as the film’s antagonist. I find horror films to be scarier when the antagonist can’t be seen, but there’s still something enjoyable in the devilish ways Ferguson plays Rose, which I’m sure will make her a popular figure come next year’s Halloween. Outside of that, I’m not entirely sure what the long-term legacy of “Doctor Sleep” will be. Perhaps it warrants another viewing from me, but my initial reading is that it’s a well-crafted studio horror film that manages to respect the work of both Stephen King and Stanley Kubrick, while not breaking any new ground itself. So while “Doctor Sleep” didn’t fully put me to sleep, it also didn’t make me stand up with enthusiasm, either. A reminder that “We’re all dying. The world’s just a hospice with fresh air.”

Powered by JustWatch
Share
Facebook
Twitter
Copy URL
Previous article
How Best supporting Actress Could Go At Each Award Show
Next article
Who’s In The Hunt For Best Director This Year?