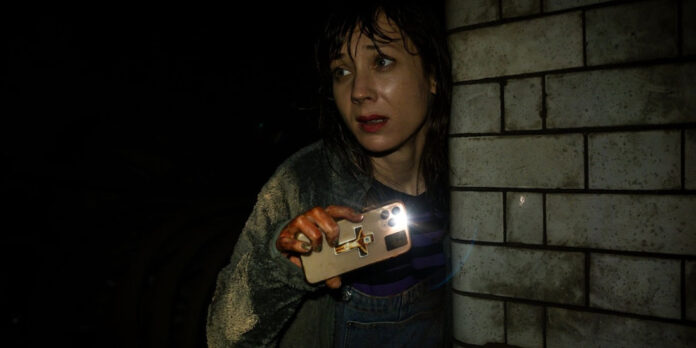 THE STORY – At the start of the pandemic, an indulgent and self-deluded livestreaming improv musician abandons L.A. for London, steals her ex-band mate’s car, and makes the wrong decision to give a ride to an elderly woman who is not what she seems.

Horror is often one of those genres that can serve multiple functions. Most people simply take to the immediate gratification of being filled with terror and dread from the on-screen events, which can result in a thoroughly enjoyable spectacle. There is also a layer of social commentary often embedded underneath the surface, waiting to be analyzed for a grander framework about the surrounding world. The latter can be a method to transform the storytelling into something much more profound and engaging. One could argue that parts of “Dashcam” aim to indulge in this greater discussion while providing a more broadly entertaining experience. The results are inconsistently effective, with the victories being few and far between.

The protagonist here is Annie (Annie Hardy), who is seen here streaming videos where she freestyles disjointed rap songs while driving around her for a captive audience of dozens. She’s also an abrasive personality that fights back against COVID lockdown protocols and maintains a staunchly conservative view. She is currently on a trip to England, visiting old friend Stretch (Amar Chadha-Patel), who was once her bandmate years ago. Tensions rise between the pair, propelling Annie out into the night in a stolen car. It’s here where she gets roped into a scheme to transport what appears to be a sickly older woman to another establishment. So begins an evening of carnage where the supernatural monsters are waiting to be revealed.

Director Rob Savage’s previous film “Host” also took place in the immediate setting of the pandemic but felt more like a brief yet engrossing exercise with a runtime that barely reached an hour. He returns to that space here, but with much weaker material. The film’s start is quite unbearable to tolerate, as the intentionally grating main character is so thoroughly unpleasant to pull the central focus. It is not just the off-putting political views being voiced, as there is a way for even that element to be executed in a manner that fits a more satirical edge. The larger issue is that this perspective is painted with such a broad brush that it’s just a tedious and aggravating ordeal. With a set-up that feels somewhat familiar in the “found footage” subgenre, including the nauseating camera handling, one finds a great distance from getting invested in this narrative.

Still, credit should be paid to the film for becoming much more compelling once it leaves its first act. There is actually an impressive display of atmospheric tension in the quiet moments that showcases a successful creepiness. When things become more bombastic near the end, the jumpscares are decently employed, and the mayhem is an alluring exhibition. Here the tone is much more celebratory of the basic tenets of the genre, also helped by shifting away from the toxic personality of the lead. There are still persistent issues, as some of this conflict feels a bit forced under the circumstances, and one is also subjected to an extended credit sequence that is simply excruciating. However, an effort is made to create a more captivating piece of exhilarating fright, which is accomplished as the story progresses.

The whole thing really belongs to Hardy from a performance standpoint, and as noted, a little of her goes a long way. There is a sense of blending her actual personality with this role, given the name of the character, and that Hardy, in real life, does have a streaming channel. One supposes that gives her portrayal an air of authenticity, yet her screen presence is still polarizing. Even when spewing rather hateful rhetoric, there isn’t much charm to her that could potentially endear an audience to her plight. It’s a frustrating character to generate an emotional connection with, and as none of the other performers make that much of an impact either, the acting leaves a lot to be desired.

“Dashcam” doesn’t revel too much in a political observation attributed to this genre, but its half-measures in this arena contribute to its faults. The initial presentation is a relatively shallow depiction that introduces an audience to characters that are at best bland and at worst grossly irritating. It’s a pretty rough start that admittedly does improve once the film fully commits to the escalating frenzy. Unfortunately, it’s too little too late by that point, with that goodwill also undermined severely by the final moments. This film can be an amusing undertaking but never consistently enough to warrant the endurance to watch it in totality.