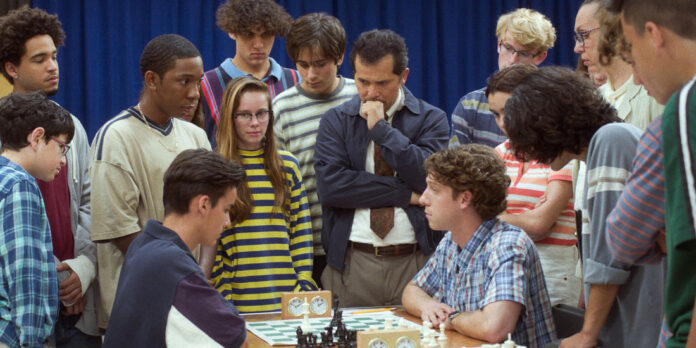 THE STORY – It’s 1998 in Miami. Rampant poverty, broken families, and a prejudiced system push underprivileged youth to the fringes of society. But for a magnetic group of teens, there’s a reprieve. A game where it’s not about where you come from, but how you play. That equalizer is chess. Mr. “T” Martinez, a chess militant and passionate coach, leads them to a completely foreign field of battle: the National Chess Championship. With an underfunded school district, Martinez and his team can’t just waltz into the arena. They have to fight for it. Chess runs parallel to their own experiences as Martinez teaches them that the power of Critical Thinking can not only save their kings, but also their lives.

​​​There are plenty of films that set out to tell very familiar stories that have been seen countless times before. Sometimes it results in fatigue as a little is done to make these tales feel inventive or unique. Other times, the charms of the characters and the creativity of the filmmaking can go a long way towards compensating for these shortcomings. There’s a lot in “Critical Thinking” that falls in the former camp, but there’s admittedly enough good-natured appeal to be won over by it.

This uplifting, fact-based story centers on a group of students in an impoverished Miami high school in the late 1990s. These kids all take part in an elective to participate on the school’s chess team. Mr. Martinez (John Leguizamo) is the dedicated teacher trying to lead the team to a never before seen victory in the national competition, as well as inspire these teenagers to believe in their abilities and strive for something greater than what’s immediately around them. These young people all carry their own adversities, which include Sedrick (Corwin C. Tuggles) coping with the death of his mother and emotionally abusive father, Ito (Jorge Lendeborg Jr.) and his attempts to avoid a life of crime, and Marcel (Jeffry Batista) as a Cuban immigrant and genius at the game.

Truthfully, there isn’t a lot here that many haven’t seen before. This film exists in a long line of inspirational stories about teenagers in struggling circumstances that come together in some sort of academic competition headed by a steadfast educator. The script by Dito Montiel doesn’t veer too far from this path, and it does indulge in overwrought clichés and often a meandering sense of direction. However, there’s still a great appreciation for what it tries to accomplish at its core: to focus on a group of underrepresented minorities that take pride in their intellectual skills. Even though this theme has been seen in countless other media, the specificity of chess makes it unique. It’s difficult to not become invested in a light-hearted story with good intentions, even when the storytelling feels scattershot at times.

Many of the issues with the script are not improved by Leguizamo’s direction. Making his feature film debut, and his first directorial project in well over a decade, his efforts behind the camera come across as mostly mediocre. The filmmaking isn’t particularly flashy, and it’s a detriment when the stakes need to be established within the story. There’s already an issue with the emotional impact from the characters feeling diffused because of the minimal set-up they receive at the beginning, and while the direction tries its best to focus on them and their activities, it never makes up for this deficiency. However, things do improve as the film reaches its climax and some notable directorial flourishes help invigorate the story. Overall, the work still doesn’t amount to much, but the added effort at the end is appreciated.

While Leguizamo may not bring that much as a director, his performance is the best asset on display. There’s such a warm and inviting screen presence he gives off, and his commitment to this role as a teacher wanting to give his students the confidence they may not always receive is one that’s quite touching. He finds the right comedic and dramatic notes to play that are effective in all the right ways, and he gives by far the best performance in the film. It’s not that surprising given he’s one of the few seniority actors amongst the group, but he manages to have a delightful charm in every scene he’s in.

Most of the young cast do an admirable job with varying degrees of impact. Tuggles has some strong moments, particularly with the tense interactions with his father, played by Michael Kenneth Williams. Both of them are compelling in their moments together. Lendeborg not only has some friendly chemistry with Tuggles but also provides more emotional weight that’s effective even when his story gets lost a bit in the shuffle. Batista, along with Angel Bismark Curiel and Will Hochman, fill out the rest of the team, and while their performances are fine, their characters aren’t given that much to do. They are delightful whenever they appear, but it’s in spite of the screenplay giving them shallow roles to work with.

As noted, there’s plenty here that other films have done before in terms of not only this type of story but the trajectory of where the plot and characters eventually lead. “Critical Thinking” is not a film that will surprise, and that lack of inventiveness takes away from it becoming a truly great work. At the same time, there’s an undeniable charm that’s abundant from the stirring message it provides concerning the education of an undervalued group of kids. The performances are all endearing, with Leguizamo being a real standout. You won’t ever be surprised by what you see here, but you’ll have a nice time with what is delivered.

Powered by JustWatch
Share
Facebook
Twitter
Copy URL
Previous article
The Next Best Picture Podcast: Episode 185 – How Coronavirus Is Impacting Entertainment & Movies To Watch During Self-Quarantine
Next article
Musicals To Look Forward To For This Year’s Tonys