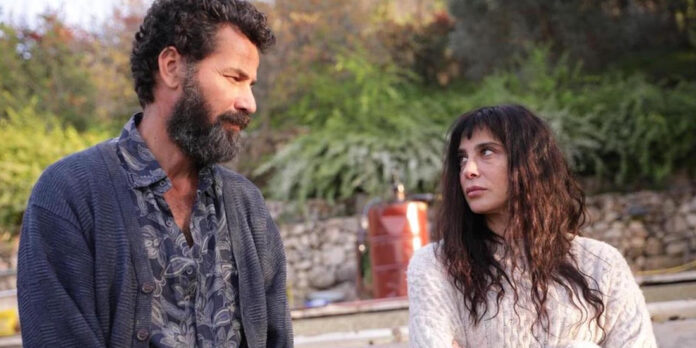 THE STORY – A couple decides to leave the toxic pollution of their home city of Beirut, hoping to build a utopian existence in a pristine home in the mountains.

​​The Badri family just wants to be left alone.

Eight years ago, political activist Walid Badri (Saleh Bakri) decided to uproot his family — his wife and celebrated singer Soraya (Nadine Labaki) and their daughters Tala (Nadia Charbel) and Rim (played jointly by Ceana and Geana Restom) — from their home in polluted war-torn Beirut to an isolated forest where they can peacefully live off the grid in an idyllic setting. But now, the grid has come calling for them. In response to its 2015 crisis of overwhelming trash in the city, the Beirut government announces an environmentally “green” landfill which will be situated next door to the Badris. Walid quickly realizes that the “green” claim is bogus. Soon, dangerous fumes from the burning garbage nearby begin to waft into the Badris’ house, making the family’s bucolic life unlivable.

You have to admit that “A family deals with the garbage dump next door” is not the most compelling logline for a feature film. Still, first-time narrative director Mounia Akl merely uses this premise of “Costa Brava, Lebanon” as a jumping-off point to take her story in unexpected directions. At first, you might guess that Aki’s take on the material is political, as the film’s opening images are of a giant statue of Lebanon’s president being motored around Beirut to the jeers of onlookers en route to its final resting place at the landfill dumpsite. With activist Walid chronicling every last environmental violation committed by the government, the stage seems to be set for a classic “little-guy-vs-the man” scenario.

But the political angle seems half-hearted at best and is soon jettisoned in favor of a much more productive theme: the family. Though Bakri is fine as the gruff Walid, playing him as a poster child for toxic masculinity, the heart of the film lies within the women of “Costa Brava, Lebanon.” Oldest daughter Tala is 17 (“going on 18” as she always insists) and is experiencing her first romantic pangs with government official Tarek (François Nour). At the same time, her precocious younger sister Rim, aged 9, is concerned about the threat to the only home she’s ever known, a worry she shares with her outspoken grandmother Zeina (Liliane Chacar Khoury). The Restom twins are particularly delightful as Rim, reminding me of no one so much as Margaret O’Brien’s Tootie from “Meet Me in St. Louis,” a young girl with a sense of curiosity and a wisdom far beyond her years.

However, it is Labaki’s soulful performance as Soraya who’s the beating heart of the film. The actress, who in her spare time wrote and directed the 2018 Oscar-nominated “Capernaum,” skillfully embodies Soraya’s torment, a wife who loves her husband and gave up her celebrated career to raise a family but still misses her job and social activist life in Beirut. Soraya knows that the family’s current crisis will force her hand to decide whether to leave the family or stay, and Labaki communicates that dilemma movingly.

Though the film’s initial attempt to offer expansive political commentary falters the film at the start, “Costa Brava, Lebanon” stands on much more fertile ground when Aki wisely begins to narrow her focus to the members of the family. The result creates a memorable portrait of an unusual family that is forced to stand up to an ever-expanding civilization that just won’t let it live in peace.