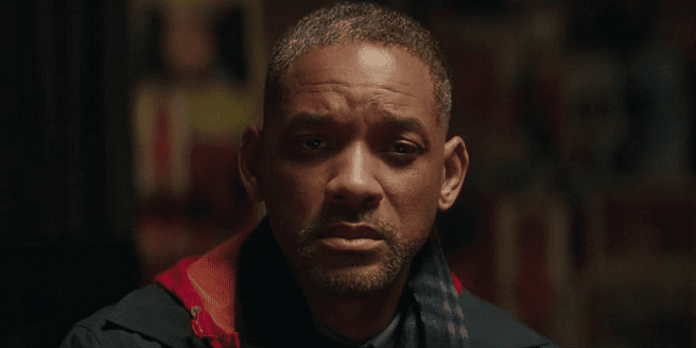 THE STORY – When a successful New York advertising executive (Will Smith) suffers a great tragedy, he retreats from life. While his concerned friends try desperately to reconnect with him, he seeks answers from the universe by writing letters to Love, Time and Death. When his notes bring unexpected personal responses, he begins to understand how these constants interlock in a life fully lived and how even the deepest loss can reveal moments of meaning and beauty.

​I almost made it all the way until the end of the year. I thought I could survive 2016 without seeing a film that offended, baffled and disgusted me so much that I would be forced to call it the worst film I’ve seen all year. Well, I’m here to report that “Collateral Beauty” is that film. Mean spirited, nonsensical and completely misguided in every way imaginable, this wanna be Christmas Tale is a disgrace to every person that managed to put their name on this movie and in the case of the actors, there’s shockingly quite a bit of them. I don’t know what witchcraft, voodoo or six figure salary persuaded them to work on this screenplay but the results are some of the most baffling you are guaranteed to see in your entire life.

A successful owner of a New York ad agency named Howard (Will Smith), has a tragedy strike his life when he loses his six-year-old daughter. Now, three years later, he is completely detached from everyone and everything in his life. Instead of motivating his employees and running his company, he would rather build elaborate domino set ups and knock them down at the end of his day. The co-founder of the company and recently divorced friend of Howard’s, Whit (Edward Norton), along with Claire (Kate Winslet) and Simon (Michael Pena) decide that they need to do something to help Howard and save their company. They hire a private investigator (Ann Dowd) and discover that Howard has been writing letters to Love (Keira Knightly), Death (Helen Mirren) and Time (Jacob Latimore). Howard cannot bring himself to do much of anything in his life and even regulates himself to the outside window looking in on a local self-help group run by Madeline (Naomie Harris). When all seems lost, he unexpectedly receives a personal response from the the very three abstracts he has been writing to…love, death and time.

It’s not enough that “Collateral Beauty” deals with the death of a child and the emotional torment that inflicts on a parent, but this nasty film has the audacity to actually make its characters unlikeable and self-centered. To get into the specifics would ultimately ruin the surprise of the movie, which I’m not going to do here except to say that this film’s marketing has been completely misleading as to what the actual plot of the film is and it’s just as mad as Will Smith’s character is becoming. Here’s a guy who is grieving and the people that are supposed to be supporting him are the very ones who are turning their backs on him, during the holidays of all times! It completely sends out the wrong message to audiences everywhere that have gone through the pain which Will Smith is going through and this is just in dealing with the film’s basic plot (As vague as I’m coming off). The film’s twists (Of which there are far too many for a film such as this) make absolutely no sense and do not manage to get you to feel good about the events which you have just seen. Confusion and anger were the feelings I experienced. Maybe it will be different for you, but when you’re dealing with such traumatic subject matter it deserves far more respect.

The one saving grace of this film is actually Will Smith who is giving it his all here, despite being failed by a screenplay that has no clear idea of what message it is trying to say or even how to convey it. Smith does not talk for nearly the first thirty minutes of the movie and the film instead shifts to the perspective of his “friends” and colleagues who we discover have their own individual issues as well. Now, I don’t know if these issues are implemented to make these characters more relatable or not, but I can tell you that the manner in which how love, death and time each factor into their own lives is the most contrived and forced writing I have experienced in any film this year. Any form of enlightenment or profound moment of discovery which these characters are supposed to feel is immediately squashed by how dimwitted and bewildering the actual premise is.

I’ve already gone on longer than I should have in regards to “Collateral Beauty.” I’m not even sure I fully understand what that title means anyway after watching this monstrosity of a film. I assume it means we are supposed to see the beauty in life despite great trauma? If that’s the case, the film does a horrendous job of exemplifying that by instead provoking our antagonist to sink him already lower than he is, all so that the ones who are supposed to love and care about him the most end up better in the end in regards to their own issues. I cannot believe nor understand what compelled actors of this caliber to sign on to a project that is this terrible. Whatever the reason was and whatever ramifications this film has on either one of their careers, I’ll be sure to say “Just be sure to notice the collateral beauty.”