Claire Foy Plays The ‘Traditional Wife’ Role In “First Man” But Is That Enough In 2018? 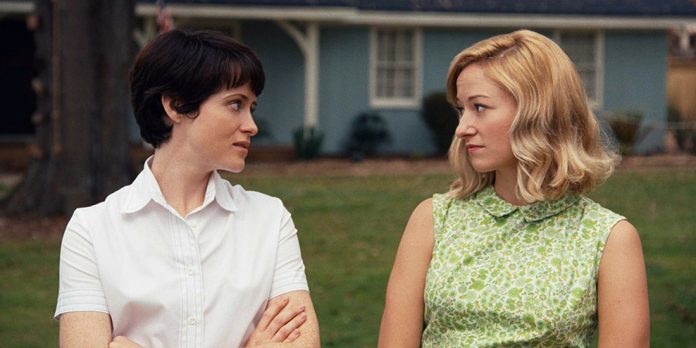 ​Claire Foy’s performance in “First Man” will likely be nominated for Best Supporting Actress at the Oscars this year. Her momentum is off the ground and, I’d guess, she’s unstoppable. She was the victim of a detestable gender pay inequity for her illustrious work “The Crown,” revealed earlier this year. She emerged victorious in an upset at the Emmys winning Outstanding Actress in a Drama Series for playing Queen Elizabeth in the same show. She has led two commercial films this year, “Unsane” and “The Girl In The Spider’s Web.” Foy has had nothing but positive public relations this year, and the narrative is, an Oscar nomination for “First Man” is going to welcome her to the club of Hollywood acceptance after acquiring such success the past two years.

Most would say Foy deserves a nomination for “elevating a role” that isn’t given much original material in “First Man.” I found her performance to be adequate and suitable. But before the buzz for this performance swells any more, I would argue the sideline-regulated “traditional wife” role is not an acceptable type of character that should align an actress with a nomination for an Academy Award in 2018.

​In real life, Janet Armstrong may have been a cheerleader to her husband’s space mission. I understand we cannot change the facts of history for a film to have a more progressive female character. However, the film goes wrong by flattening Janet, by disregarding that she may have any personal conflicts of her own. Janet’s arc is about her husband’s intimate struggles, justifying his problematic behavior and reviewing his delicate emotions. She is an object in the plot rather than a character we believe could exist in the narrative world of the movie separate from her husband. The problem isn’t that Janet Armstrong is a character who happens to be a wife; it’s that she’s only a wife, who has no identity of her own outside of her husband’s personal and professional struggles. If we weren’t talking about rewarding the actress playing this role an Oscar nomination, this would be negligible. But we are, so the character deserves to be scrutinized for its damaging social implications.

I don’t take issue with Foy; her performance is fine. I take issue with normalizing and celebrating the frustrating archetype in this day and age, especially when there are better options of female roles and performances from which to choose.

Another problem I have is how Foy’s buzz came to be through pundits, despite the critics clearly marking the parameters of the character in reviews. There’s a distinction we should be clear about: pundits who saw “First Man” reacted to the film by propelling Foy to the top of the Best Supporting Actress conversation. “Amazing,” “winning,” and “monstrous.” If you were looking at Film Twitter, you’d have thought people were watching Mo’Nique in “Precious.” But if you read the actual reviews written by major film critic publications, the consensus response to Foy’s performance and Janet as a character in “FFirst Man” was consistent as follows: “Claire Foy is very good but is limited by a traditional wife role.” After seeing the film, I feel confident in agreeing with the critics. Foy is serviceable, but there’s nothing she does that hasn’t been done in more creative ways a dozen times over. The overreaction of the pundits and Film Twitter to her performance is curious to me. And that’s what all of this is: an overreaction.

And I can’t help but wonder about the bigger picture here: Is rewarding a merely good performance in a “traditional wife” role the best way to summarize where we are culturally in 2018? After the devastating Hillary Clinton/Donald Trump election? After #MeToo? After Harvey Weinstein? After two years of #OscarsSoWhite? After Frances McDormand dedicated her Best Actress speech to the topic of “inclusion riders?” In 2018, we should not reward paper-thin roles that minimize a female actor to the role of the wife or girlfriend, especially if the stereotype isn’t constructed in a novel way. In addition, here’s some irony: in the year people want Glenn Close to win Best Actress for “The Wife,” a film that criticizes such institutional sexism and the trapping women in the role of an influential man’s wife, the same people are pushing for a character that abides by those patriarchal principles in “First Man” to the top of Best Supporting Actress.

Many actresses have been nominated, won, or had performances in the mix for a Best Supporting Actress recently (more performances than there should be) for playing a version of the male protagonist’s girlfriend or wife. Roles like Marion Cotillard and Penelope Cruz in “Nine,” Amy Adams in “The Fighter,” Michelle Williams in “Manchester By The Sea,” Maggie Gyllenhaal in “Crazy Heart,” and the best example, which is not an exactly fair comparison since she was competing in Best Actress, Felicity Jones in “The Theory Of Everything” show a clear contrast to Claire Foy in “First Man.” Most of these roles exist only to aid the arc of the man at the center of the film, and some of these characters wouldn’t even pass the Bechdel Test. Many of them do not have scenes in their films without the man, to whom they are dating or married. But these actresses utilized ways to think outside the box of the stereotype. They used creativity to fill in the blanks of their characters’ stories and found unique ways to expand on them so the audience believed they could exist apart from their male leads.

Many people believe Foy did bring that vibrant artistry to the role that elevated it and allowed her to capture her character more fully. I would argue that Janet Armstrong in “First Man” is closer to characters like Laura Linney in “Sully” or Diane Lane in “Trumbo,” and Sienna Miller in “American Sniper,” than she is to the laundry list of terrific characters and performances that went the extra mile to differentiate themselves from just “the wife.

Part of the problem is the screenplay which doesn’t afford Foy much to work with for the almost-two-and-a-half-hour film. For instance, Josh Singer could not bother to muster up a single scene where Janet is allowed to explore how she feels about her young daughter dying at the beginning of the film, a plot point which ties into Neil’s arc of the film. Foy’s best work and only significant highlight in “First Man” is a scene in the third act where Janet tries to convince Neil to talk to his children before leaving for the Apollo 11 mission. Foy plays the moment with raw emotion. That scene aside, her performance is mostly comprised of briefs cuts to her teary-eyed, concerned facial expressions.

In a time where gender equality and social consciousness is at its most prominent and indignant, what message are we sending when we nominate performances in socially regressive “traditional wife” characters such as Janet Armstrong in “First Man” for Academy Awards? Most would counter me, citing it’s not Claire Foy’s fault that her character was written the way it was. That’s true, and again, the performance passes the bar as believable. But we’re not handing out participation ribbons. She’s being thrust into the Academy Awards conversation for the best performances of the year, over other actresses who are equally as talented and have more original and dynamic roles. Nominating Foy’s work as Janet Armstrong would be a step backward, as far as I’m concerned, for both the actresses in the industry who will have to depend on these roles for work and the female audience watching these characters being held up as the best Hollywood has to offer.