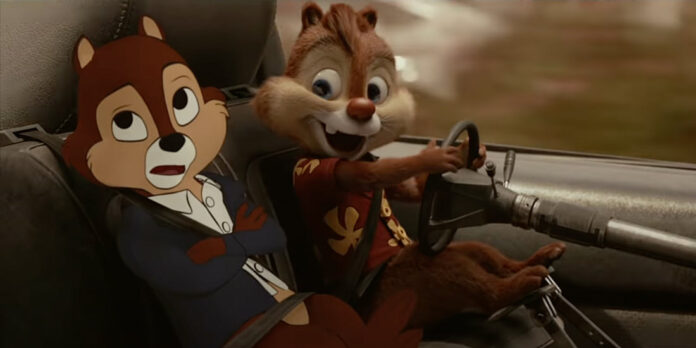 ​Get ready for one of the craziest films based on a TV show that’s ever been made – and no, I’m not talking about “Downton Abbey: A New Era.” Akiva Schaffer’s “Chip ‘n Dale: Rescue Rangers” is an overwhelming, intense nostalgia-fest as it manages to weave in cameo after cameo of animated characters into its noir-influenced plot. The hybrid live-action/CG animated film is reminiscent of “Who Framed Roger Rabbit” (who, of course, makes an appearance) and calls attention to standards and practices of the current state of the animation industry today. Dan Gregor and Doug Mand outdid themselves with this script, managing to pack in a wild amount of characters while never losing sight of the central relationship between the two titular characters. At the same time, Lonely Island director Akiva Schaffer (“Popstar: Never Stop Never Stopping“) finds the right tone to deliver one of 2022’s most delightful surprises.

The film, narrated by Dale (Andy Samberg), traces the infamous chipmunk duo from meeting at school in 1982 to moving to Los Angeles to work on the TV show “Rescue Rangers” from 1989 to 1990. It charts the end of their seemingly unbreakable friendship as they argue due to Dale feeling like he always comes second to Chip (John Mulaney). We next find Dale in the present day, trying to live off of his former fame. He’s had a “CGI surgery” that has changed his design from 2D animation to CGI (think of the “Alvin and the Chipmunks” recent character designs). Meanwhile, Chip, whose traditional animation contrasts nicely with Dale’s updated CGI animation, has settled into a quiet life as an insurance agent. The two are only brought back together when their old friend and costar Monterey Jack (Eric Bana) asks for their help. The Valley Gang, led by an adult Peter Pan who goes by the name Sweet Pete (Will Arnett), is kidnapping animated toons, modifying them, and using them in “bootleg” films. It’s a clever commentary on the animation industry and a suitably scary idea for the characters. When Monty himself is taken, Officer Ellie (KiKi Layne) asks Chip and Dale for their help. She’s a fan of their old show and thinks that their experience playing their roles might be helpful in the actual investigation. Chip is reluctant to get involved due to his falling out with Dale but eventually is willing to do anything to help his old friend. The pair must learn to work together again if they hope to rescue their friend and end the Valley Gang’s ways.

For a film that gets so much right, one of the biggest problems with “Chip ‘n Dale: Rescue Rangers” is the character of Sweet Pete, a middle-aged, overweight version of Peter Pan. He explains that the industry threw him away when he got older, and could no longer star in boyish roles. It seems to be a commentary on what occurred to Bobby Driscoll, who voiced Peter Pan in the 1953 animated film and starred in several Disney live-action films. Disney let him go once he hit puberty, and he struggled with narcotic addiction and even served jail time for illegal drug use before his tragic early death at the age of 31. While the filmmakers probably thought they were being clever by incorporating real-life events into the story in this matter, making him the film’s villain feels insensitive to the real Driscoll and his treatment at the hands of the company making this movie.

Outside of that, “Chip ‘n Dale: Rescue Rangers” is a surprising blast from start to finish. Mulaney and Samberg provide engaging voice performances, as does Seth Rogen as a motion-capture Viking character named Bob (who resembles the “dead eye” animation of many animated characters) and J. K. Simmons as a Claymation police detective named Captain Putty. It’s also fun that Tress MacNeille and Corey Burton reprised their roles as Gadget and Zipper from the original series. But the show’s real stars are the massive number of animated characters from various studios, even outside of Disney, that has cameos in the film. It’s almost impossible to catch all of them, some lasting for only a second and many hiding in the background. The most hilarious one is undoubtedly “Ugly Sonic,” before the visual effects artists re-did the character’s look for the final recent “Sonic The Hedgehog” movie. Still, overall, the film relies on the nostalgia of seeing characters from other projects without having them come off as a pandering money-grab like last year’s “Space Jam: A New Legacy” and instead incorporates them in such a way that feels more aligned with “Who Framed Roger Rabbit” in all the best ways.

While adults will appreciate the meta-humor the Lonely Island crew brings to the film’s material, it’s a little unclear who the target audience for the film actually is. It’s perhaps too dark for younger children to enjoy, and they will likely miss out on many references. Even jokes about the “Uncanny Valley” and “Polar Express eyes” seem targeted directly toward adult viewers. Yet, adults who are less familiar with some of the IPs mentioned will likely not get much out of the film either, and even those who do could be turned off by the way the concept gets a bit repetitive by the time the film reaches its third act.

Though it may not appeal to everyone, “Chip ‘n Dale: Rescue Rangers” is much better and funnier than anyone likely expected, mainly because it’s debuting on Disney+ rather than going to theaters (which is a shame because so many of the film’s jokes and surprises would’ve played so well with an energetic crowd). Its self-aware nature and how it comments on the state of the industry elevates the sweet tale of friends reuniting, making it a journey worth taking rather than an IP cash-grab. While the number of cameos can be a bit overwhelming, it’s undeniably fun to predict who might pop up next as Chip ‘n Dale go off on another adventure.