Recommended Cannes Palme d’Or Winners You Should Seek Out 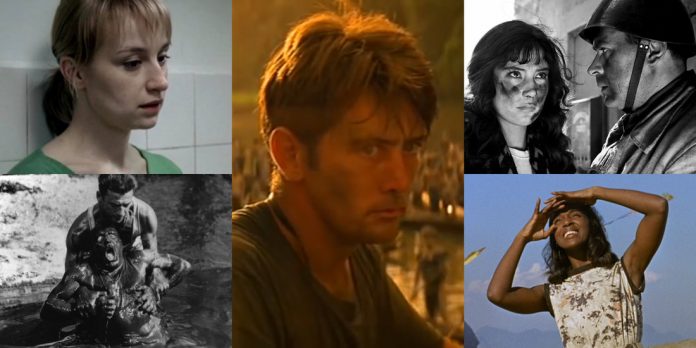 I, a humble film snob, have not yet managed to see every film that has been awarded the Palme d’Or. However, from the several dozen I have seen, I have been rewarded with thrills, tears, and elation from some of the most influential, unique, and dynamic films made in every corner of the globe over the past three-quarters of a century. With a jury that changes every year, the Cannes Film Festival certainly invites controversy and discussion more-so than other awards-giving bodies, often resulting in recognition of films that would otherwise be missed by casual film fans and giving the world’s most brilliant talents a stage on which to share their art with the world. Many of the Palme d’Or winners rank among the greatest films ever made, and it is here that I would like to recommend just a handful for your viewing pleasure as the 75th anniversary of the festival kicks off this week. While I’m sure many of you have seen popular titles such as “Taxi Driver,” “The Tree Of Life,” “Pulp Fiction” and “Parasite,” I’m going to mention some others (with viewing links) I think you should seek out.

In 1980’s Romania, two students risk imprisonment in order for one to receive a highly illegal abortion. Filmed by a steady, fearless camera with no hint of music or soundtrack, the defiant “4 Months, 3 Weeks And Two Days” provides an unflinching look at a real-life scenario most would rather not think about, but unfortunately, due to today’s political climate are being forced to now more than ever before. With stoic, grounded performances from its two lead actresses, the film grabs you by the shoulders and refuses to let you look away.

Legendary choreographer Bob Fosse put his heart, soul, blood, sweat, and tears into the making of his 1979 masterpiece “All That Jazz,” a thinly veiled autobiography in which Fosse examines his own addictions, relationships with women, chaotic professional life, and ailing health. With a Powell & Pressburger-esque examination of life and death illustrated through stunningly surreal dance numbers, “All That Jazz” is a shot of adrenaline from start to finish, never resting until the final curtain.

The first film that allowed me to see cinema as an art form was awarded by the Cannes Jury at the 1979 festival, recognizing the grueling labor of love presented by its forever-changed director Francis Ford Coppola. With some of the most stunning cinematography, exceptional performances, and chilling sound work ever put to film, “Apocalypse Now” hypnotizes its viewer for over two hours. Once finished, the audience is shaken awake as if from a horrible yet beautiful dream.

Marcel Camus’ “Black Orpheus” is a colorful, lively adaptation of the familiar Greek myth set against the backdrop of the Rio Carnaval. Breno Mello stars as a modern, suave interpretation of the mythical musician who falls head-over-heels in love with the beautiful Eurydice (played by Marpessa Dawn). As the city celebrates around them, the pair’s love is tested by the forces of life and (literal) death. With luscious colors and music filling the air, “Black Orpheus” plays out like a party that will never end.

​Blue Is The Warmest Colour

Wildly controversial upon release for its explicit sexual content and less than ideal set conditions, “Blue Is The Warmest Colour” (known as La Vie d’Adèle en français) was so admired by the 2013 Cannes Jury that it made the “exceptional step” of awarding the Palme d’Or not only to its director Abdellatif Kechiche but also to its lead actresses Adèle Exarchopoulos and Léa Seydoux. Almost ten years after its premiere, the film holds strong as a considerate, honest portrayal of a young woman’s messy, complicated coming-of-age that refuses to take shortcuts or make compromises. Seydoux and Exarchopoulos’ brilliant performances make the film’s three-hour run time feel as swift as a gust of wind, while the up-close, raw cinematography creates spectacle in every frame.

Far from his usual historical epic, this David Lean-directed drama is an intimate, unvarnished look at ordinary forbidden love shrouded with pre-war anxiety. With central performances by the brilliant Celia Johnson and Trevor Howard, the film follows a pair of ordinary London citizens (both married) who form a special, indescribable bond over a series of meetings at a train station. In 1945, the year of this film’s release, the Cannes Film Festival similarly awarded ten other films with the top “Grand Prix,” including works by Billy Wilder and Roberto Rossellini. Even among the greats, “Brief Encounter” stands out as an impactful tale that reminds us that our lives can change at any moment for better or worse.

​The Cranes Are Flying

Some films, it would appear, manage to pull off magic tricks right in front of your eyes. Mikhail Kalatozov’s “The Cranes Are Flying” does so with ease, using truly mind-blowing camera movement and innovative use of black and white cinematography to tell the story of a young woman and a nation during wartime. Starring the devastatingly brilliant Tatyana Somojlova (who received a special mention from the Cannes Jury for her performance), the film was a worldwide critical hit upon release and continues to influence the hoards of wartime tragic love stories that have followed.

Wim Wenders’ “Paris, Texas” rolls by like a family photo album, combining a mix of euphoric and painful nostalgia and remembrance. At the heart of the film is a love story about two people at opposite places in their lives: one, old and hopeful, the other, young and despondent. Told through the storied, weary faces of Harry Dean Stanton and Natassja Kinski, “Paris, Texas” asks audiences to reconsider the meaning and purpose of a happy ending while gently reminding us that no story ever really ends.

Mike Leigh’s “Secrets And Lies” tells you everything you know about the director who has used England’s working class as his muse and canvas. With a heart-wrenching central performance from actress Brenda Blethyn, the film follows several branches of an East-London family, each working tirelessly to avoid scandal and social ostracism. Leigh effortlessly presents a melodrama free of any Hollywood glamour while raising challenging questions around such topics as class, race, and family.

A middle-aged man in Tehran, for one reason or another, has decided to commit suicide. He has picked a spot and dug his grave; now, he needs a stranger, whom he will pay, to bury his body after his death. With this premise, director Abbas Kiarostami contemplates issues from the meaning of life to the sweetness of mulberries. Like a Socratic dialogue, “Taste Of Cherry” is a poetic, gentle examination of a man’s purpose and our dependency on one another.

​The Umbrellas Of Cherbourg

If you’ve never seen a film by Jacques Demy, this is probably unlike anything you’ve ever seen. If you’re interested in watching the filmography of Jacques Demy, “The Umbrellas Of Cherbourg” is a perfect place to start. Like “The Cranes Are Flying,” “The Umbrellas Of Cherbourg” follows a young woman who stays home while her boyfriend fights for his country. Rather than the glory of World War II, the film is set against the melancholic backdrop of the Algerian War that greatly influences this era’s cynical French New Wave. However, with Demy, there is no hint of cynicism but rather earnest passion and desire for a love story with a happy ending. Filled with (literally) constant music and singing, the film’s candy-colored exterior reveals a bitter pill underneath as the story rolls on.

​The Wages Of Fear

Henri-Georges Clouzot was a certified master of pacing and suspense. In this 1953 film, a team of ex-pats living in Central America is tasked with the dangerous task of transporting a highly explosive material over a journey of 500 km for an omniscient American oil company. With a literal explosion possible at any moment, the film’s interpersonal drama becomes all the more heightened and suspenseful as the crew drags themselves across a treacherous landscape. “The Wages Of Fear” is a tense exploration of the valuation of human lives and the literal fatality of capitalist greed.

​What are some Palme d’Or winners you would recommend for others to watch? What do you think will win the Palme d’Or this year at Cannes? Please let us know your thoughts in the comments section below or on our Twitter account.