Can Netflix Finally Win best picture With “The Power Of The Dog?” 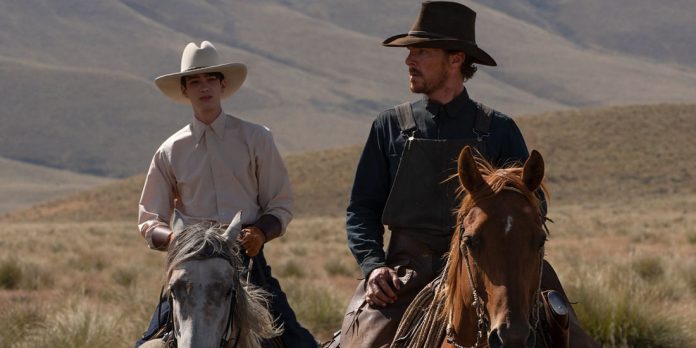 “The Power of the Dog” has been a strong Oscar contender since all the way back in September when it premiered at the Venice Film Festival. And as the recent Oscar nominations proved, it shows no signs of slowing down. A strong precursor run and a leading nomination haul for a film from an acclaimed director that’s beloved by critics and audiences alike feel like an absolutely unstoppable trajectory. Little seems to be able to stop the psychological Western from securing Oscar’s biggest prize. However, the one thing standing in the way may very well be the first thing viewers see when the film begins – a big fat red “N.” Netflix has been very clearly trying and failing to grab the Academy’s top award for years now but has yet actually to do it. “The Power of the Dog” seems to stand the best chance of any of the esteemed offerings they’ve garnered awards attention for in the past few years, but to win Best Picture, “The Power of the Dog” needs to make history as the first streaming service film to do so.

On paper, Jane Campion’s latest masterpiece has literally everything that indicates a smooth path to victory. It currently leads in critical, and precursor wins for Best Picture, Director, Actor, Supporting Actor, and Adapted Screenplay. It’s received a Best Picture nomination from every single major precursor, including a win from the Golden Globes. And it was nominated in every single Oscar category it could have besides Best Costume Design, topping all other films in its nomination count. It even managed surprisingly mentions in Best Sound and Best Production Design, along with a rare double nomination in Best Supporting Actor. Clearly, it’s favored by a great many different branches of the Academy, all of which will be casting a vote for Best Picture. It’s hit every area necessary to be considered a Best Picture frontrunner and then some. Arguably, the only significant stat that doesn’t work in its favor is the fact that it wasn’t nominated for Best Film Ensemble at the Screen Actors Guild Awards. However, recent Best Picture champs “Nomadland,” “Green Book,” and “The Shape of Water” also missed in this important category.

Without a doubt, its biggest competition is Kenneth Branagh’s semi-autobiographical film “Belfast,” which has done very well with precursors but had a bizarre nomination morning. It showed up in plenty of expected yet essential categories such as Director, Original Screenplay, and Supporting Actor. There was an expected nomination in Supporting Actress, but, strangely, it went not to Caitríona Balfe, who received mentions from all four televised precursors, but instead to Judi Dench, who hadn’t appeared in a single major awards lineup. In addition, it missed in categories in which it stood a decent chance at a nomination, namely Cinematography, Production Design, and most importantly, Film Editing. However, it did get a below-the-line nod in Original Song. All this to say, outside of its substantial snub in Best Film Editing, “Belfast” merely had an unexpected nomination day rather than a bad one. However, that Film Editing miss is big – while “Birdman” managed to win Best Picture without a nomination here, the fact of the matter remains that it’s undoubtedly the below-the-line category that’s practically a requirement to be considered a serious Best Picture contender.

Besides “Belfast,” every one of the other contenders for Best Picture lacks at least one crucial component that usually signals a chance at Oscar glory. “West Side Story” is missing from Best Adapted Screenplay, Film Editing, and had an uneven guild awards run. “King Richard” did about as well as could’ve been imagined, but its filmmaker Reinaldo Marcus Green is unsurprisingly absent in Best Director. “Licorice Pizza” severely underperformed, scoring only three nominations, albeit in major categories. “Dune” will likely gobble up most of the craft awards, but the shocking exclusion of Denis Villeneuve from the Best Director lineup severely dampens its Best Picture chances. And while “Don’t Look Up” – Netflix’s other offering – did manage Original Screenplay and Film Editing nods, its inability to score nominations in either the acting or directing categories makes its chances very slim. A film hasn’t won Best Picture without nominations in at least one of these fields since “Grand Hotel” all the way back at the 5th Academy Awards. The remaining Best Picture nominees (“CODA,” “Drive My Car,” and “Nightmare Alley“) are excellent inclusions in this varied lineup, but for these films, the nomination is the reward.

So, with industry support and giant holes in its competitions’ chances, what’s stopping “The Power of the Dog” from having one of the most assured chances at Best Picture in recent memory? Truly the only thing holding the film back in any way is the fact that it’s a Netflix film. In Hollywood, money counts above all else, and it’s a simple fact that releasing films in exclusive theatrical windows is the only assured way to make a significant profit. For evidence, one must only look at the wildly shortsighted decision by Warner Brothers to release their 2021 slate of films both theatrically and on the HBO Max streaming service on the same day. Besides “Dune,” practically all their films underperformed, even those with high star power (“King Richard“) and identifiable branding (“The Matrix Resurrections“). Generally, the only box office success stories since the pandemic began have been films released only in theaters with no immediate option to stream at home; not counting the guaranteed-to-be-profitable MCU films, these theatrical success stories include “Venom: Let There Be Carnage,” “No Time to Die,” “Ghostbusters: Afterlife,” and “House of Gucci,” among others. And while it’s nice to imagine that the Academy Awards function as a purely merit-based bestowment of artistic triumph, the Oscars are a giant commercial for the business of moviemaking and signal what Hollywood deems to be helpful to the continuing success of the industry. If a film isn’t released with the intention of putting theaters first, Hollywood has little monetary purpose for rewarding it at the Oscars.

On the other hand, Netflix has made no secret of the fact that they intend to disrupt this century-old market by greatly favoring at-home viewership over theatrical exhibition. If it weren’t necessary to qualify for the Oscars, it’s very likely that Netflix wouldn’t release any of their films for a perfunctory limited release. But still, Netflix clearly wants a Best Picture trophy to serve as an indication of their worth and ability to create quality content. It’s a curious relationship between the Academy and Netflix – in many ways, they need each other to thrive, and in just as many ways, they’re both working towards opposing goals.

Just by looking at the Best Picture races of the past few years, Netflix’s desire for the top prize is apparent. They’ve made a model of attracting beloved, auteur filmmakers with unlimited budgets and complete creative control, and in return, the streaming giant is practically guaranteed films that Oscar has no choice but to notice. Their impressive haul of recent Best Picture nominees from just the past three years includes “Mank,” “The Trial of the Chicago 7,” “The Irishman,” “Marriage Story,” and “Roma.”

Alfonso Cuarón’s “Roma” was arguably their best chance so far at Best Picture. Right up until Oscar night, most pundits were predicting it based on its universal acclaim and stellar precursor run. And yet, at the end of the day, the Academy went with old-fashioned studio filmmaking by giving their top prize to “Green Book,” a shocking conclusion to what was otherwise a predictable evening. How did this happen? While many factors of simple taste may have contributed to its loss, the fact that a streaming company distributed it was very likely a good reason that many Academy members couldn’t bring themselves to vote for it. In fact, when “The Power of the Dog” vastly overperformed on nomination morning, and most Oscar predictors declared it the clear frontrunner, I couldn’t help but have flashbacks to the similar way “Roma” performed on its respective nomination day. Namely, Marina de Tavira’s shocking inclusion in Best Supporting Actress seemed to indicate a vast and powerful level of support amongst Oscar voters. The key difference here is that “Roma” was missing a nomination in Best Film Editing, which was mostly brushed off due to the film’s slow pace and penchant for long, unbroken takes. “The Power of the Dog” has no comparable Achilles heel.

An argument could be made that the Academy’s hesitancy to reward Netflix might be because it’s a newer studio compared to the stalwarts that have been a part of Hollywood since the early 20th century. However, this can quickly be dispelled by looking at some of the recent winners. Namely, “Moonlight” was an A24 production, a company that was only founded four years before its release, and Neon successfully pushed “Parasite” to a Best Picture win despite being just barely three years old. Clearly, it’s not a matter of the old guard acting snobbish towards the new kids on the production company block.

Despite all these pros and cons, it’s still very likely that “The Power of the Dog” may find its way to an easy, predictable victory. Inarguably, this is Netflix’s best chance yet at cinema’s highest honor yet, and if Jane Campion’s acclaimed film can’t do it, it’s hard to imagine what could.

What do you think? Do you think “The Power of the Dog” can all the way to deliver Netflix its first Best Picture win? Be sure to check out our latest Oscar predictions here and let us know your thoughts in the comments section below or on our Twitter account.